Polygraphs Do Not Work... Why Do We Still Use Them? 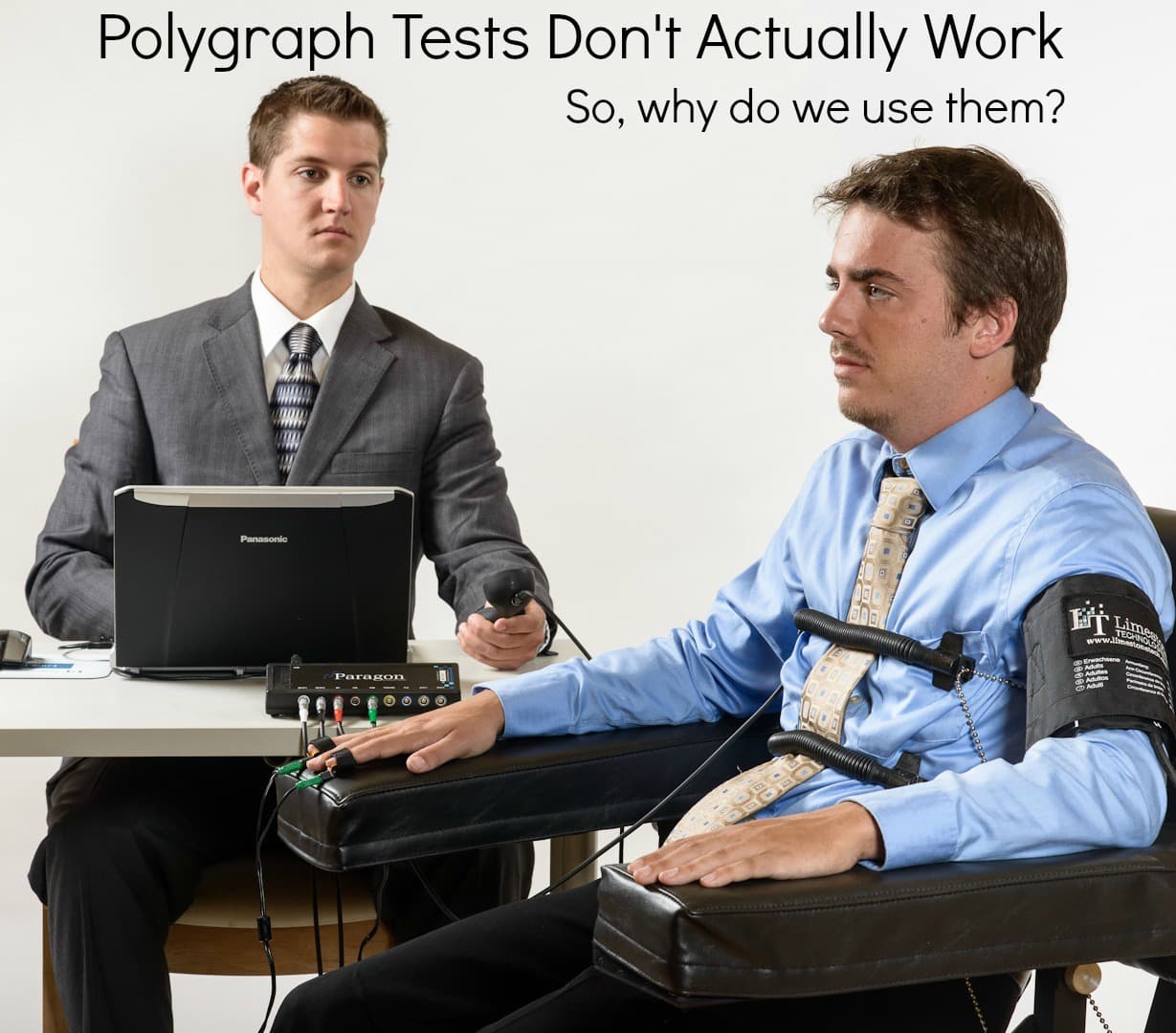 Even if you've never been arrested, it's entirely possible that you've been subjected to a polygraph test. They are often used to clear people for certain types of jobs. When looking at U.S. government agencies, about 70,000 of those positions require future employees pass this lie detector test. On top of that, law enforcement agencies use polygraph tests all of the time, to the point that the deciding factor in some plea bargains has rested on results from a polygraph test.

Leonard Saxe, a psychologist from Brandeis University and someone who has performed a lot of research on polygraph machines, stated, "There is no unique physiological sign of deception. And, there's no evidence whatsoever that the things the polygraph measures - heat rate, blood pressure, sweating, and breathing - are linked to whether you're telling the truth or not." Furthermore, the National Research Council concluded in a recent report that, "Almost a century of research in scientific psychology and physiology provides little basis for the expectation that a polygraph test could have extremely high accuracy."

As early as 1983, Saxe created a report for Congress that eventually lead the branch of government to make it illegal for private employers to use polygraphs in their hiring process. In 1998, the Supreme Court made polygraphic evidence inadmissible in federal court, citing that "there is simply no consensus that polygraph evidence is reliable."

In the end, polygraphs are nothing more than a pseudoscience, so why are they still being used?

How Does a Polygraph Work? What Does it Do?

The polygraph made it's first appearance in the early 20th century. The finalized version of the test was able to measure a person's galvanic skin response, breathing, blood pressure, and pulse. Even then, the evidence to tell if someone was lying by measuring these physiological responses wasn't very strong. Added to that, each of these three responses are controlled by different physiological systems, so they would need to be connected in a very intricate way.

The current method that interrogators use when conducting a polygraph test were developed in the 50s and 60s. It's called the "Control Question Technique." In a quick summary, an interrogator would start by asking control questions, easy questions for the suspect to answer that would establish a baseline for their anxiety. After that, the interrogator would ask different questions (including questions about the case) to stress the suspect out. After all of this is done, an analyst would look over the data from the interrogation and see if the suspect had a "more stressed out reaction" to the relevant questions. The rest is history.

The polygraph clearly measures something, because it does all sorts of cool things when you ask people questions. The test only measures a person's level of anxiety. As Saxe pointed out, "All these physiological measures are simply associated with fear and anxiety. And people are anxious, sometimes, when they're telling the truth, and they can be not anxious, sometimes, when they're lying. The more practiced you are at lying, the less anxiety is associated with it."

Some controlled studies on polygraph machines have shown that polygraphs are able to distinguish a liar from a truther in some cases, but these tests also misidentified a shocking number of people telling the truth and labeled them as liars. The National Research Council was quick to point out that these tests are flawed because they are mock crimes, innocent people being accused of real crimes would probably feel much more anxiety than those in a controlled lab experiment. The list of cons for the use of this test go on, and on, and on.

Why Do We Use It?

The polygraph's greatest weapon is the belief that it works. It's a prop used by law enforcement and some employers. They are a deterrent and in some cases, somebody who believes you can tell when they are lying are more liable to tell the truth. Unfortunately, sometimes the prop is too good, because there are many people (both interrogators and bystanders alike) who believe the polygraph is accurate and actually works.