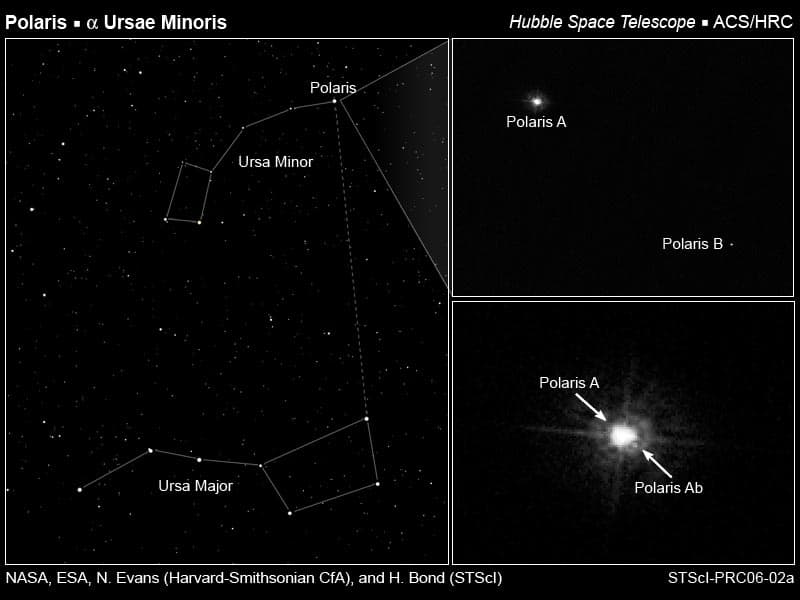 All of us, at some point in our lives, have at least heard of the North Star. Those of you who live in the Northern Hemisphere may have even seen the North Star, assuming you know what you’re looking for. Polaris, as the North Star is formally known, is located at the tip Ursa Minor's tail (the Little Dipper's handle) and is the alpha star of the constellation, the brightest star. Polaris is not the brightest star in the sky by far—that’s not its claim to fame. Polaris is actually the 50th brightest. But, seeing how there are millions upon millions of stars in the sky, this stars luminosity isn’t anything to sneeze at.

For a long time now, we have known that this single point of light was actually a binary star, Polaris A and B. The main star that we see, Polaris A, is a yellow-white giant star about six times heavier, 2.5 times larger and 2500 times brighter than our Sun. Polaris B is a white star a little heavier than the Sun, a little brighter, and a little hotter. Polaris B orbits around the main star at 240 billion miles (386 billion kilometers). This is a large orbit—for reference, the Earth orbits the Sun at 93 million miles (150 million kilometers), and Pluto orbits the sun at 3.9 billion miles (5.9 billion kilometers). Polaris B is both bright enough and far enough from the great brightness of the main star that any decently powered telescope can see it orbiting Polaris A.

That’s not all that makes up this star system. For about 50 years, astronomers have known about a third star in orbit around Polaris, but were unable to find it until recently. Using the Hubble Space Telescope and all of the focus it could muster, a third star was located. This star has been so hard to see because it is a very small, dim white dwarf, and its light gets lost in the light from Polaris A. Designated Polaris Ab, this star orbits around Polaris A at a distance of 2 billion miles (3.2 billion kilometers).

The Polaris system has been a much-needed star since the birth of navigation, when someone looked up at night and noticed that the star didn't appear to move in the sky. Fast forward a few thousand years, and we have civilizations sailing the open seas. It was incredibly easy to get lost on the open water with no land in site, and Polaris provided a concrete reference for mariners to find their way. Even today it’s used as a navigation tool by sailors, both civilian and military, or people camping in the woods. Its unique position directly above the Earth gives it the title of the North Star, meaning if you look at this star, you are looking almost due north.

The title of North Star didn't always belong to Polaris. The Earth is tilted on its axis by 23.5°. On this axis, the Earth spins like a top, making one circle around this spin every 26,000 years. Currently, the Earth’s tilt is pointed right at Polaris. Around 3,000 BCE, however, when the Egyptians were constructing the pyramids, the North Star was a star called Thuban in the constellation Draco. As the years ticked by, Thuban shifted farther and farther from the celestial pole. Around the year 1 CE there was no North Star, until a thousand years or so later when Polaris was close enough to be named the North Star.