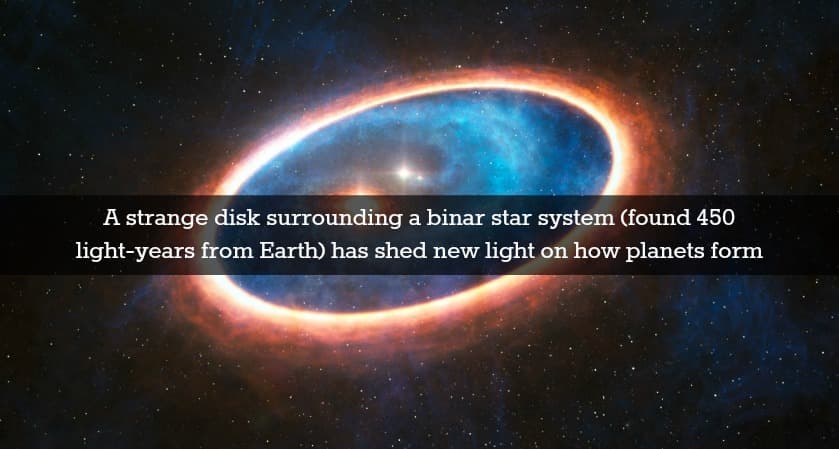 Using the European Southern Observatory (ESO)'s Atacama Large Millimeter/Submillimeter Array (ALMA), researchers have detected a never-before-seen gas stream being flung towards a binary star system, by its massive outer disk. Scientists have speculated this unique feature could be fueling a smaller, potential planet-forming disk. Clearly, this new discovery could have major implications in the search for exoplanets.

Anne Dutrey and a team of researchers from the Laboratory of Astrophysics of Bordeaux and CNRS, employed ALMA to observe a multi-star system, dubbed GG Tau-A (it is located approximately 450 light-years from Earth). Nestled with the Taurus constellation, GG Tau-A is comprised of a two stars - a main star, and a companion. The main star is surrounded by an inner disk with roughly the same mass as Jupiter. A larger, outer ring, in turn, surrounds the system; however, the inner ring — which is steadily losing material, as the main star feeds off of it —is the most intriguing. Intriguing in the fact that, because of the rate at which it's losing material, it should have long-since disappeared.

ALMA is designed to observe objects in the millimeter and submillimeter wavelengths. It studies the universe, the nature of existing, its sensitivity observes the universe in the far infrared portion of the spectrum. Researchers were able to observe the gas and dust clouds in between the two rings. Their observations revealed a stream of material flowing from the outer disk to the inner disk, supplying fresh material to the inner disk.

Dutrey explains, "Material flowing through the cavity was predicted by computer simulations but has not been imaged before. Detecting these clumps indicates that material is moving between the discs, allowing one to feed off the other. These observations demonstrate that material from the outer disc can sustain the inner disc for a long time. This has major consequences for potential planet formation."

Planet formation is a slow process, resulting from the leftover bits following the birth of a star. In order for planets to form, a disc of gas and dust, known as a proplyd, has to be present and long-lasting. The discovery of GG Tau-A's inner disk and life-supporting gas stream, may indicate to scientists new places to look for future exoplanets.

These results will be published in Nature on Oct. 30. Emmanuel Do Folco is the co-author on the paper and sums up the implications of these results as this, "Almost half the Sun-like stars were born in binary systems. This means that we have found a mechanism to sustain planet formation that applies to a significant number of stars in the Milky Way. Our observation are a big step forward in truly understanding planet formation."