Physics Unfolds Right Before Your Eyes in this Display of Synchronicity 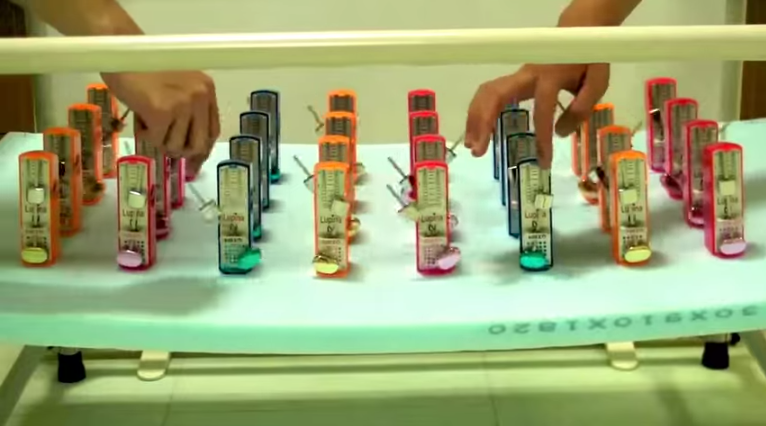 In both biological and physical systems, something called synchronicity sometimes surfaces. In the broadest possible terms, it explores the relationship between cause and effect and 'meaningful coincidence.' Not to mention, makes a stunning display of physics.

Simply put, synchronicity is a phenomenon in which one or more external things seem to be intrinsically tied together. Take an orchestra — when an assortment of separate instruments work together to make music — for example. Despite the fact that each has a separate, distinct sound, they eventually get on the same wavelength.  Of course, there are other examples,  like GPS systems, certain sporting events (like synchronized swimming) and even a human heart beat.

Unlike the other examples, in nature, nothing in particular forces these things to sync up. Oftentimes, it isn't even intentional, but the pure result of chance (like, say. when you look at a clock and see that the hour/minute are the same as the month/day, 11:11 on 11/11).

In the spirit of the seemingly impossible happening, picture one, single metronome (a device that was built to tick at regular intervals, like a wristwatch). It can march to the beat of its own drum perfectly, but staying in sync becomes more difficult when we start adding additional metronomes into the equation. Two can tango, and 4 can effectively square dance, but how many more metronomes can you throw in before they start doing their own different dance? This video demonstrates that, over the course of a minute or two, not ten, or even twenty, but thirty-two metronomes can sync up and remain that way without even the slightest intervention by humans.

The video's author explains how it works:

Metronomes (or "pendula"), when on table, oscillate with random phases, since that is how they started and they are "uncoupled" (no energy/information flows from one to other so they do not "know" each other.) When they are all together on the cans, notice that the cans themselves oscillate little, providing coupling/information crossover. which forces "synchronization" in periodic systems (discovered by Huygens in 17th century).