Some assembly required. Also, some components are totally theoretical. 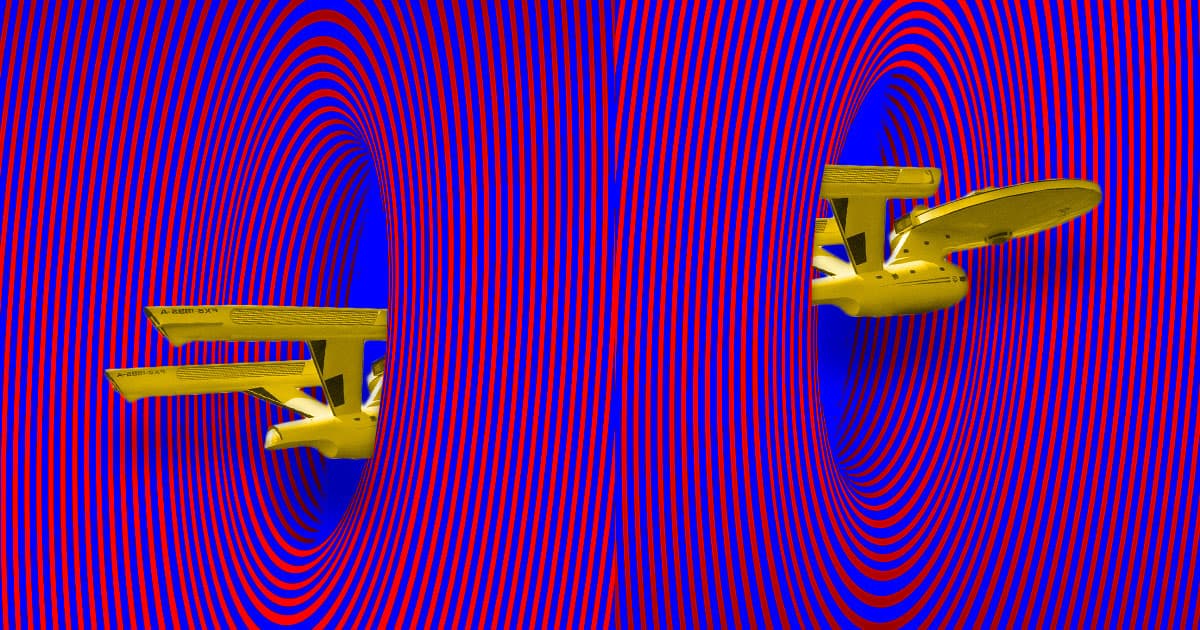 Image by Image via dric/Victor Tangermann

Here's a simple how-to on how to construct a traversable cosmic wormhole that could send your spaceship to the furthest reaches of space: take two charged black holes, place them back to back, and thread two cosmic strings through both. Stretch both strings to infinity and presto! You've got yourself a traversable wormhole.

Confused yet? A team of astrophycisists dreamed up this solution, which could technically send travelers to a distant corner of the universe, in a preprint paper on arXiv earlier this month — and Ohio State University astrophysicist Paul Sutter published a terrific breakdown of the concept in Live Science.

But there's a catch, before you decide to just jump into that wormhole: wormholes are by nature incredibly unstable. To make sure either charged end stays fully stretched out, a pair of cosmic strings — hypothetical, one dimensional defects in space-time — could hold them in place.

Unfortunately, cosmic strings are also not a great travelling companion.

"You never want to encounter one yourself, since they would slice you clean in half like a cosmic lightsaber, but you don't have to worry much since we're not even sure they exist, and we've never seen one out there in the universe," Sutter wrote. Phew!

While wormholes — and cosmic strings — have yet to be proven to exist, Russian physicists suggest that we could measure their shape by looking at the ripples they leave behind in space-time.

Unfortunately, these ripples or gravitational waves could sap black holes' mass and cause them to eventually collapse in on themselves.

But the hope is that the strung-up wormhole could be stable for just enough time to send something or someone — say Matthew McConaughey's character in Christopher Nolan's 2014 space movie "Interstellar" — on a hell of a journey.

More on black holes: Astronomers Just Spotted One of the Biggest Black Holes Ever

Read This Next
Quacks Like a Duck
Those Headlines About Scientists Building a Wormhole Are Total Nonsense, People
Falling In
Objects We Thought Were Black Holes May Actually Be Wormholes, Scientists Say
Black Hole Snapshot
Scientists Release Image of Black Hole at Center of Our Galaxy
Sucking Atmospheres
Scientists Spot Ravenous "Vampire" Star Devouring Its Neighbor
Yuge
Scientists Discover Enormous Black Hole Right Near Our Galaxy
More on Hard Science
Warped Tour
Feb 2 on futurism
Professor Believes Door to Warp Drive May Lie With Ethylene Glycol
Sky Bursts
Feb 2 on the byte
Astronomers Intrigued by 25 Mysterious Repeating Radio Signals From Deep Space
Tractor Beam
Jan 26 on the byte
Scientists Build Working Tractor Beam, Although It's Comically Tiny
READ MORE STORIES ABOUT / Hard Science
Keep up.
Subscribe to our daily newsletter to keep in touch with the subjects shaping our future.
+Social+Newsletter
TopicsAbout UsContact Us
Copyright ©, Camden Media Inc All Rights Reserved. See our User Agreement, Privacy Policy and Data Use Policy. The material on this site may not be reproduced, distributed, transmitted, cached or otherwise used, except with prior written permission of Futurism. Articles may contain affiliate links which enable us to share in the revenue of any purchases made.
Fonts by Typekit and Monotype.