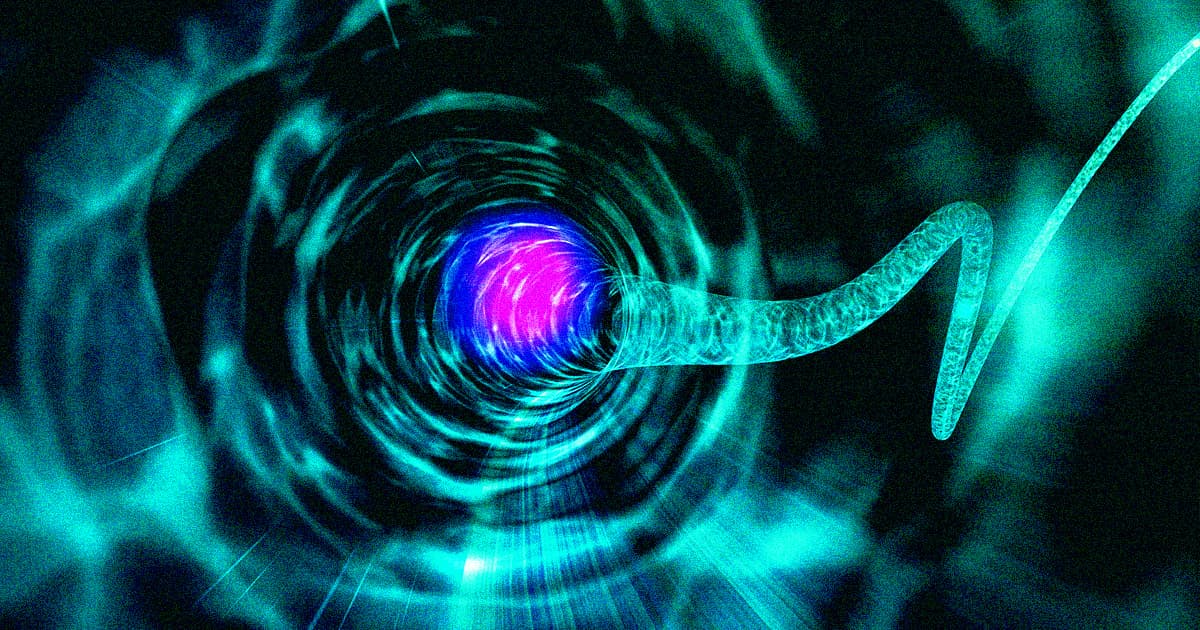 What if we could traverse distances on an astronomical scale, in a blink of an eye, through the use of a wormhole?

It's a topic rife with speculation — but if recently published research is anything to go by, traversing through an interdimensional wormhole may not be quite as far-fetched as it sounds.

Two separate groups of researchers have suggested new theories as to how to make wormholes safe enough to be traversable by humans. Both papers were published today in the journal Physical Review Letters.

Long used as a convenient plot device in science fiction, wormholes would connect two distant corners of the universe through an interdimensional portal — though, unsurprisingly, their existence has yet to be proven.

And then there's also the problem of gravitational collapse. If wormholes were to exist, any conventional matter would end up jamming the connection up as something travels from one side to the other. That's why some theorists suggest using exotic matter to keep the wormhole open.

But we may not even need exotic matter, as Jose Blázquez-Salcedo from the Complutense University of Madrid and his colleagues suggest. In their framework, matter is made up of fermions, an elementary particle that is treated by many as the building block of matter.

By changing the fermions' mass and charge, Blázquez-Salcedo argues that traversable wormholes could indeed exist — but only if the ratio of the total charge to the total mass within the wormhole is larger than a theoretical limit originally set by black holes.

There's one problem however: the suggested wormholes would only be microscopic and far too small for humans to traverse through.

But Juan Maldacena from the Institute for Advanced Study, New Jersey, and Alexey Milekhin from Princeton University may have a solution for a much larger traversable wormhole.

Their five-dimensional wormhole, as detailed in a separate paper, could theoretically allow a person to travel across an entire galaxy in less than a second, experiencing a force of less than 20 g.

The only trouble is that only the person traversing the wormhole would perceive a second going by. To any outsider, the journey would appear to take thousands of years.

More on wormholes: Astrophysicist Says It’s Likely We Can Travel Through Wormholes

Read This Next
Quacks Like a Duck
Those Headlines About Scientists Building a Wormhole Are Total Nonsense, People
Falling In
Objects We Thought Were Black Holes May Actually Be Wormholes, Scientists Say
Into the Wormhole
Physicists Publish Instructions For DIY Wormhole
Futurism
There Are Two Types of Time Travel, and Physicists Agree That at Least One of Them Is Possible
Futurism
We Can't Alter The Flow of Time But, According to Physics, We Can Bend It
More on Hard Science
Warped Tour
Feb 2 on futurism
Professor Believes Door to Warp Drive May Lie With Ethylene Glycol
Sky Bursts
Feb 2 on the byte
Astronomers Intrigued by 25 Mysterious Repeating Radio Signals From Deep Space
Tractor Beam
Jan 26 on the byte
Scientists Build Working Tractor Beam, Although It's Comically Tiny
READ MORE STORIES ABOUT / Hard Science
Keep up.
Subscribe to our daily newsletter to keep in touch with the subjects shaping our future.
+Social+Newsletter
TopicsAbout UsContact Us
Copyright ©, Camden Media Inc All Rights Reserved. See our User Agreement, Privacy Policy and Data Use Policy. The material on this site may not be reproduced, distributed, transmitted, cached or otherwise used, except with prior written permission of Futurism. Articles may contain affiliate links which enable us to share in the revenue of any purchases made.
Fonts by Typekit and Monotype.