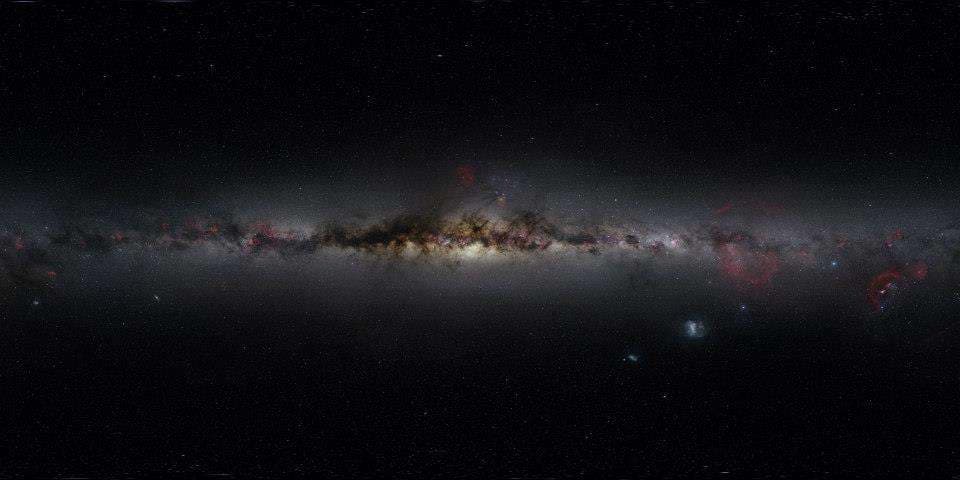 You’ve seen pictures of the Milky Way in the past, but you’ve never seen one like this. Pictured here is the final result of the Photopic Sky Survey by astrophotographer Nick Risinger.

Mr. Risinger traveled 45,000 miles by air and 15,000 miles on land, to every corner of the globe, in order to capture this panoramic view of the entire Milky Way as seen from Earth. This yearlong project was made more difficult by light pollution and the cycles of the moon, especially in the Northern Hemisphere.

In the end, this project required 37,440 exposures to capture the majesty of our Milky Way (and beyond) in an impressive 5,000-megapixel image.

I think Mr. Risinger describes this image best when he says, “Large in size and scope, it portrays a world far beyond the one beneath our feet and reveals our familiar Milky Way with unfamiliar clarity. When we look upon this image, we are in fact peering back in time, as much of the light—having traveled such vast distances—predates civilization itself.”

This image breathes life into extremely faint stars, much fainter than you could possibly see with the naked eye. For those of you curious enough, only about 9000 stars are visible with the naked eye from the planet, which is less than 0.1 percent of our galaxy. Only about 2000 are visible from any one spot assuming you have good eyesight, the moon is not out, and of course, there is minimal light pollution.

There is a high resolution and interactive version of the picture found here.