A Waymo's safety driver was threatened at gunpoint. 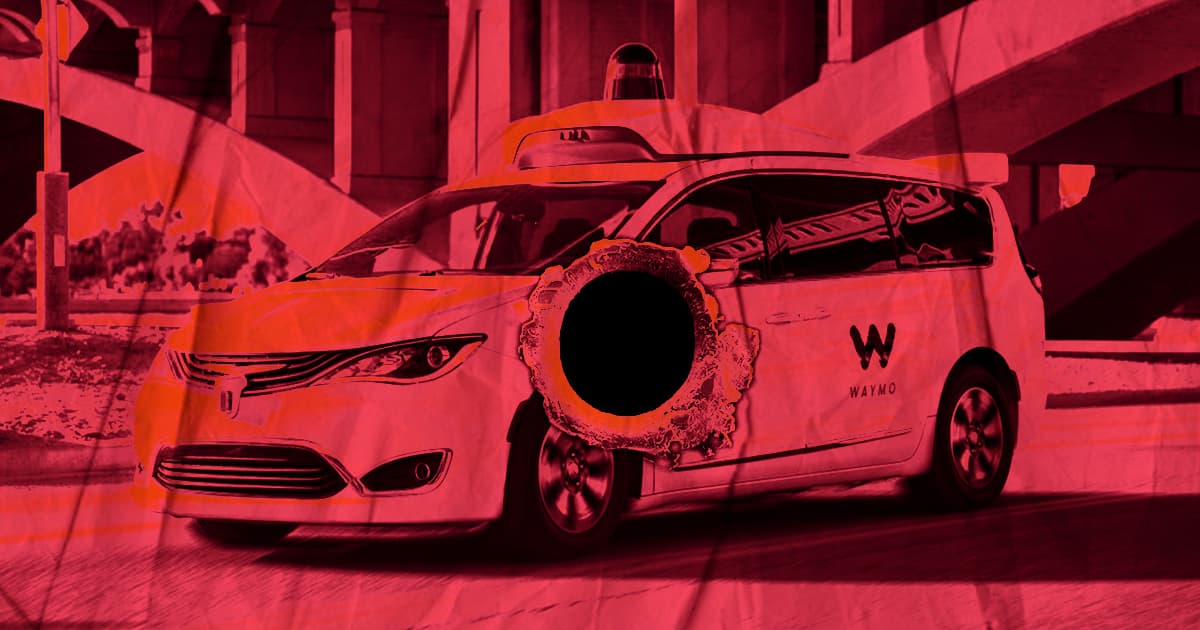 The streets are becoming unsafe for self-driving cars. Police have responded to "dozens of calls regarding people threatening and harassing Waymo vans," Arizona Central reports.

There have at least 21 incidents, according to the news report, in which safety drivers — human "passengers" behind the wheel, assigned to oversee the driving of each of Waymo's autonomous vehicles — were harassed in some way or another.

The news comes after the Alphabet-owned company recently launched the first-ever self-driving taxi service for paying customers in Arizona.

The abusive behavior includes motorists yelling at Waymo's cars, throwing rocks at them, or slashing their tires. There was even an incident where a bearded man pulled a handgun at a Waymo safety driver.

"We believe a key element of local engagement has been our ongoing work with the communities in which we drive, including Arizona law enforcement and first responders,” reads a statement from Waymo, sent to Arizona Central.

Safety drivers are trained to handle these kinds of situations, and are instructed to call Waymo before 911, depending on the situation, according to police reports.

So why all the hate? A lot of the reported incidents involved people who were heavily intoxicated or, in the instance involving the handgun, suffering from dementia.

But why Waymo in particular? A lot of the discontent stems from Waymo's position in the market as a company that's planning on taking people's jobs, according to information technologies lecturer at Arizona State University Phil Simon.

"This stuff is happening fast and a lot of people are concerned that technology is going to run them out of a job," Simon told Arizona Central.

"There are always winners and losers, and these are probably people who are afraid and this is a way for them to fight back in some small, futile way," says Simon.

READ MORE: A slashed tire, a pointed gun, bullies on the road: Why do Waymo self-driving vans get so much hate? [Arizona Central]

Read This Next
Steering Wheels Coming Off
Automotive Lobbying Group Abandons the Term "Self-Driving"
Empty Seat
Waymo Ditches Human Safety Drivers in Its Self-Driving Taxis
Mixed Feelings
Uber's "Safety Driver" During Deadly Self-Driving Car Crash Charged With Negligent Homicide
Public Trust
Just 19 Percent of Americans Trust Self-Driving Cars With Kids
Passing Through
Watch a Self-Driving Car Obey Police Hand Signals
More on Advanced Transport
Wrong Turn
Yesterday on the byte
Terrifying Video Shows Self-Driving Tesla Head Into Oncoming Traffic
Where's Musko
Friday on futurism
7 Theories About Why Elon Musk Has Disappeared
Robotaxi to Nowhere
Friday on the byte
Group of Robotaxis All Shut Down at Same Moment, Stopping Traffic for Hours
READ MORE STORIES ABOUT / Advanced Transport
Keep up.
Subscribe to our daily newsletter to keep in touch with the subjects shaping our future.
+Social+Newsletter
TopicsAbout UsContact Us
Copyright ©, Camden Media Inc All Rights Reserved. See our User Agreement, Privacy Policy and Data Use Policy. The material on this site may not be reproduced, distributed, transmitted, cached or otherwise used, except with prior written permission of Futurism. Fonts by Typekit and Monotype.