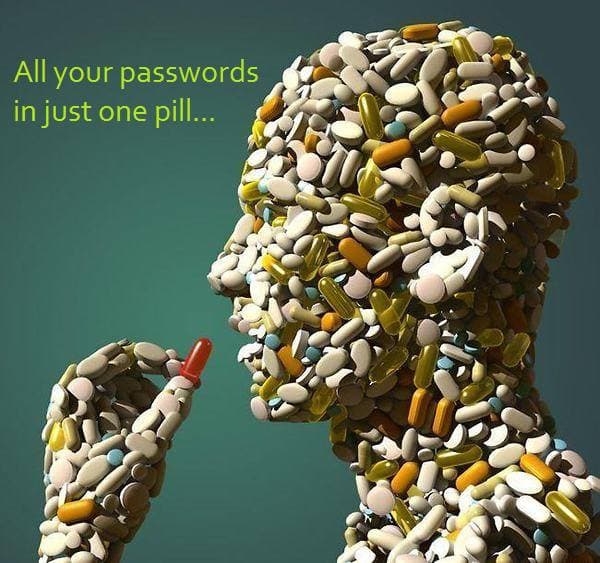 Given how the skills of a certain faction of individuals grow along with our technology, a lot of emphasis has been put on making sure you take the necessary precautions to keep all of your accounts safe from the watchful eye of your friendly neighborhood hacker. One of the best ways of doing this is by creating a strong, diverse password (with lots of numbers symbols, when possible) and changing it often. (You should also make sure you use different passwords for each service) Some of us though aren't graced with the ability to remember our ever-changing passwords. If you are one of them, fear not, science is coming to your rescue. At the “All Things Digital: D11" conference that took place in June of 2013, Motorola announced its intent to develop a line of pills containing passwords that will change the face of electronic security ever, perhaps by making authentication a relatively seamless process.

In order for the password pill to do its job, users merely need to take a daily pill. After it is swallowed, it will journey through the esophagus before it lands in the stomach, where the electrolyte-powered technology (yes, this is said to be safe) will be activated by stomach acid. After which, it will send out an 18-bit, ECG-like signal. "Essentially, your entire body becomes your authentication token," explained Regina Dugan, senior vice president of Motorola's Advanced Technology & Projects. That’s right—You, for better or worse, become a walking, talking, human password.

Once swallowed, Dugan said; “My arms are like wires, my hands are like alligator clips — when I touch my phone, my computer, my door, my car, I’m authenticated in. It’s my first super power. I want that.”

It has been said that the product has been tested and was successful at authenticating a smartphone. Moreover, the capsule has been approved by the FDA. However, the public reaction has been somewhat mixed. Understandably, people are worried about the privacy issues that will arise when one’s body is turned into an electronic transmitter.

While the discussion moderator questioned whether Google (which owns Motorola) will know everything a user is doing, Dugan noted that the company will only know if the pill is turned on or off.  Nor is there any possibility that the password pills could be used to track the locations or movements of the individuals that use the service.

Similarly, there are concerns that such a technology could be dangerous on the body. Motorola has said that you could take one pill a day (approximately 30 a month) for the rest of your life without suffering any adverse side-effects, but obviously, that can not be said with any certainty right now. We would need to run several years of human trials to say definitively. That won't happen until, or if, the concept fully comes to fruition.

Additional References (no, this isn't a hoax):

"Motorola Is Working On a Password Pill for Once-Daily Authentication — Oh, and a Tattoo, Too" ('Times Technology' Article)
"Google: Pill Passwords And Electronic Tattoos In The Works As Motorola Focuses On Innovating Authentication Methods:" ('IBM Times' Article)
"Motorola Wants to Use Tattoos, Pills Instead of Smartphone Passwords" ('DailyTech' Article)

What do you think? Yes or no: Will you be purchasing the Motorola pill when it comes on the market? Furthermore, what are your concerns with this type of technology? Let us know here or on twitter.