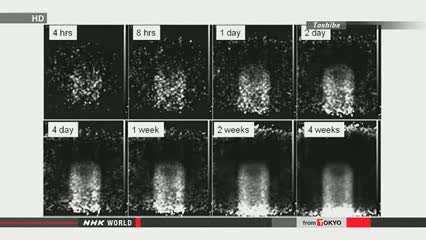 The blisteringly hot epicenter of the Fukushima Daiichi nuclear meltdown has finally been exposed by a massive machine that uses space-based beams to look through reactor shielding. This method, called Muon tomography, has essentially provided the first pictures from within the interior of the now-defunct reactor.

Outside of the controlled environment of a functional reactor, scientists explore the mysteries of nuclear meltdowns using equations and computer modeling; The alternative of simply cracking open a fractured containment vessel and taking a good long look inside is not recommended. For obvious reasons, doing so would exacerbate an already catastrophic environmental disaster.

This poses a bit of a conundrum. In order to determine whether or not a reactor has melted down and breached its pressure vessel, someone has to get a good look inside of it—where high levels of radiation lurk.

Using billboard-sized detectors, which are filled with inert gases designed to detect and track the path of subatomic particles called muons, scientists have produced a remarkably clear image of the interior of Fukushima's containment vessel.

An image which shows: nothing. But nothing is exactly what you would expect to see if the core's fuel has melted down and escaped the pressure vessel.

Muon tomography, in a sense, is a bit like taking an X-ray image, only on a cosmic scale. They are effective for penetrating relatively flimsy things like human skin and nylon carry-on luggage. But particularly thick materials— say, the containment vessel for a nuclear reactor, which is explicitly designed to prevent radiation from seeping through—is not as conducive.

Enter muons. Muons are high-energy subatomic particles. Outside of specialized particle accelerators, they are primarily generated by cosmic rays hitting Earth’s atmosphere: the charged protons collide with atmospheric molecules and split into muons. They exist, on average, for only two microseconds, which is still plenty of time for them to penetrate Earth’s crust and other structures.

The tomographs have not revealed anything unexpected in the Fukushima Daiichi Number One Reactor, which is a good thing; the calculations and models used to simulate the meltdown and all potential outcomes appear to have been accurate. However, the details of what the interior of the reactor pressure vessel currently looks like helps resolve lingering matters of uncertainty—like whether or not all of the fuel melted out, or if some was left which will warrant special clean up.

The situation as a whole remains unappealing. The plans to scrap the reactors (rather than simply entomb them, as we did after the Chernobyl disaster) will take 40 some years to complete.