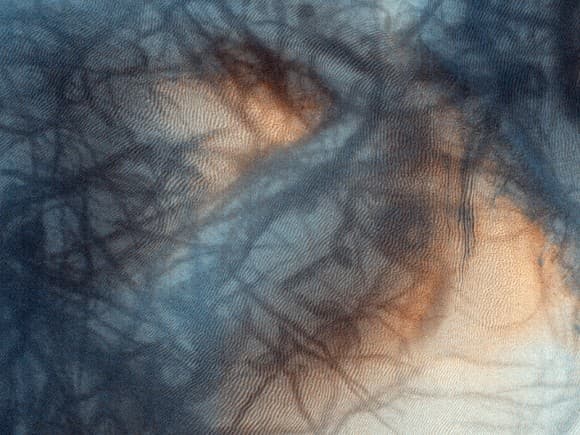 If that were the case, the implications would be truly sensational. Thus far, we have only detected frozen water, water vapor and a few things that indicate Mars was once a wet world. Discovering liquid water could be game changer for many reasons, but above all, it would put Mars as the solid front runner in the search for alien (or in this case, not so alien) life in the solar system. Needless to say,  a lot of people have their fingers crossed.

To figure out whether or not it was water sculpting the gullies, scientists turned to MRO once again. On board the spacecraft resides the High Resolution Imaging Science Experiment camera, otherwise known as HiRISE. The camera has played an important role in distinguishing significant features of Mars’ terrain in resoundingly high definition.

Serina Diniega of NASA’s Jet Propulsion Laboratory says, “This [technology] allows us to make repeated observation[s] and to examine surface changes over time”. She goes on to include, “Much of the information we have about gully formation, and other active processes, come from the longevity of MRO and other orbiters”

Since arriving on the red planet, HiRISE has focused its attention on 356 sites that contain gullies, which on Earth, are trenches carved by the movement of water down a slope. Astoundingly, thirty-eight of the sites indicate change over time. This was a surprising discovery, given that earlier theories had proposed that the odd streaks on Mars’ surface formed thousands of years ago while it was still a vibrant world. In actuality, they observed the gullies transforming, sometimes dramatically, before their eyes. Some showed evidence of additional debris build up at the base of the trenches, others spawned new branches. It was now clear that gullies are still quite active on Mars.

Side-by-side comparisons of photos taken of the same location helped researchers verify when the gully seemed to be flowing most prominently. As it turned out, the activity “coincided with seasonal carbon dioxide frost and temperatures that would not have allowed for liquid water” stated NASA’s press release (announced on July 10th, 2014).

So, if it isn’t liquid water, what’s creating martian trenches? The next obvious contender is frozen carbon dioxide, otherwise knows as dry ice (it comprises approximately 95% of Mars’ atmosphere). We know that carbon dioxide (Co2) freezes at -78.5 ºC (-109.3 ºF) at sea level (one atmospheric pressure); therefore, dry ice is not found naturally on Earth, our surface temperature and atmospheric pressure just aren't conducive to the freezing of Co2. Conversely, on Mars, the temperatures can drop down to -153 °C (-225 ºF) at the poles during winter. In comparison, during the summer, temperatures at the equator can warm up to 20 °C (70 °F).

Scientists now believe the trenches have been carved into Mars' surface by seasonal dry ice formations. The sublimation, or phase transfer, of carbon dioxide gas into a solid could create enough lubrication to help move along the flow of the frozen material. As the atmosphere freezes more gas, its mass becomes greater, thus gravity might also aid downward flow.

While this research — recently published online in the journal ICARUS — suggests that liquid water isn't the catalyst, dry ice is still a pretty exciting consolation finding. Lead author Colin Dundas (from the U.S. Geological Survey’s Astrogeology Science Center) remains optimistic, saying, “I like that Mars can still surprise us…Martian gullies are fascinating features that allow us to investigate a process we just don't see on Earth”.

The Most Alien Landscapes on Mars (Slideshow):