OpenBCI Just Launched a Kickstarter for Their Ultracortex Mark IV

BCI stands for a “brain-computer interface” that allows individuals to use brain signals to direct some external activity. Unfortunately BCI technology is often exorbitantly expensive, typically costing thousands of dollars for a good system. In 2014 OpenBCI took the first step towards creating an affordable open-sourced BCI kit, kickstarting a $320 board and raising over $215,000. Today, OpenBCI is back on Kickstarter to launch a new campaign, one that pushes their mission of accelerating open-sourced innovation of human-computer interface technologies to a whole new level.

This campaign features two primary components. The first is the newest version of the OpenBCI 3D-printed EEG headset, known as the Ultracortex Mark IV. The second is the OpenBCI Ganglion, which is a high-quality, low-cost ($99), 4-channel, Arduino-compatible bio-sensing platform. Co-founder Conor Russomanno describes the tech as, “a beginner’s kit to human computer interfacing.”

The Ultracortex Mark IV is 3D-printable headset that can either be purchased fully assembled or as a DIY kit for self-assembly. The design features dry electrodes that allow for rapid setup (under 60 seconds), and eliminates the need for sticky electrode paste. Notably, the headset comes in three different sizes and is intended to work with both the OpenBCI 32bit Board and the new Ganglion board. The team states that they decided to focus on a 3D printed design because it allows for greater customizability and the ability to target preferred locations for the electrodes. Moreover the 3D printed design means that as new and better electrodes and electronics are made available the team won’t have to replace the entire headset.

The Ganglion is a $99 Arduino-compatible, wireless microcontroller that’s able to sample up to 4 channels of brain activity (EEG), muscle activity (EMG), and/or heart activity (ECG). Simblee is used for the on-board microcontroller and wireless connection. This will provide users with programmable flash, 29 GPIO pins, and the ability to update software over the air. Notably, the team asserts that every Ganglion will be pre-programmed with versatile firmware, meaning that you will be able to start using the technology, and sensing your body, right out of the box.

Inspiring a Future of Makers

The OpenBCI community is already composed of a diverse array of individuals – from gamers and robotics engineers to individuals who are working to better understand neurological conditions. With this campaign, the OpenBCI team hopes to extend their reach even further and make their technology available to a host of new innovators, bringing BCI to college students, high school classrooms, and anyone with a desire to explore brain-computer interfacing.  Co-founder Conor Russomanno states that, ultimately, the success for BCI depends on these new innovators being able to access (and be inspired by) such technology: “With this new line of products, we hope to inspire and empower a younger generation of engineers, scientists, and creators to get involved with biosensing and programming. Today’s kids are the future experts of neuroscience and human-computer interfacing. We want to help them get there.”

Be sure to checkout the campaign on Kickstarter! 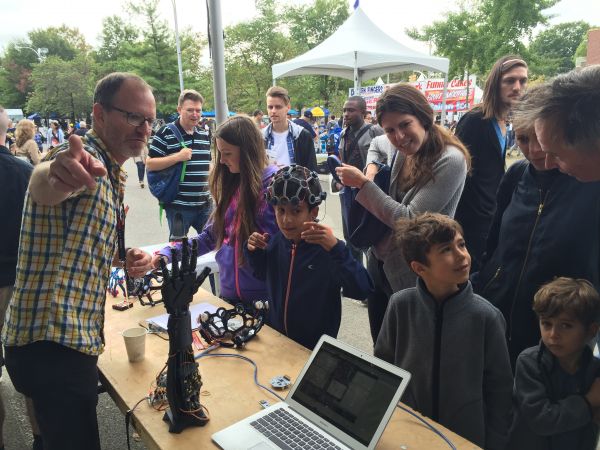 The Pentagon Wants to Control Drones With Soldiers’ Brain Waves