Could We Use Mirrors to See beyond the Edge of the Observable Universe? 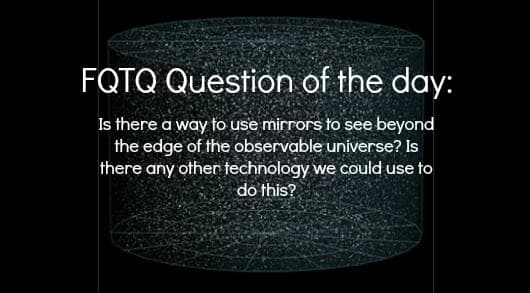 For example, if the mirrors were placed there 3 years ago, would they reflect 3 light-years passed the edge of the observable universe?

If they were placed there 13 billion years ago, could we see twice as far?

In order to answer the question, let me give a brief rundown of the observable universe and what it is. Roughly 13.81 billion years ago, our universe came into existence. Very shortly thereafter, primordial light started shooting across the cosmos and spreading throughout the early universe. At this juncture, the universe itself was also expanding. The inflation of the universe slowed after the first initial burst, but since then, the  rate of expansion has been steadily increasing due to the influence of dark energy. Cosmologists estimate that the oldest photons that we can observe have traveled a distance of 45 billion light years since the Big Bang. That means that our observable universe is some 90 billion light years wide (give or take a few light years).

These 90 billion light years contain all of the quarks, quasars, stars, planets, nebulae, black holes—and everything else that we could possibly observe. But the observable universe only contains the light that has had time to reach us. A lot more universe exists beyond what we are able to observe. According to the theory of cosmic inflation, the entire universe’s size is at least 1023 times larger than the size of the observable universe and could be up to 1050 times larger.

So while the size of the observable universe looks like this:

The size of the unobservable universe looks like this:

Essentially, we can't see anything anything farther away than the 90 billion light-year edge of the observable universe. But what if we could get a mirror there? Would it allow us to see more?

First,  for the purposes of this question, we will assume that the light is bright enough for us to see from Earth, that nothing is going to block our view, and that the light won't get red shifted out of existence. Now then, let's scale things down to make it simple (take a look at the attached image for clarification on the following discussion).

Thanks to Raphaël Laflamme for sending us this question.