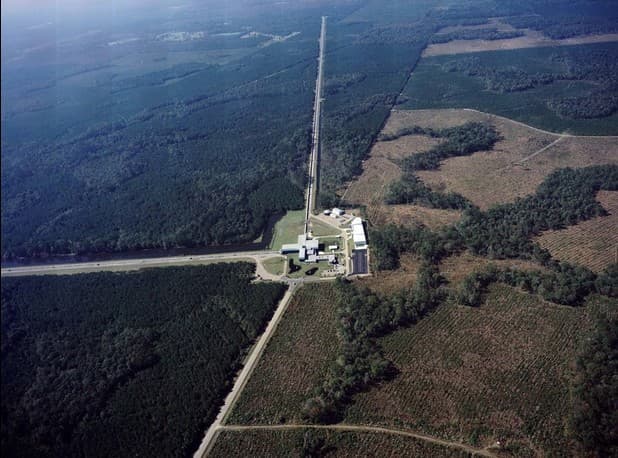 By detecting these waves, scientists hope to study systems they can’t observe with traditional light-based astronomy, as well as learn more about the formation of star systems, and even uncover clues about the origin of the universe.

Upgrades to LIGO—a pair of detectors operating in Livingston, Louisiana, and the Hanford Site, just outside of Richland, Washington—began in 2010. These upgrades, which aim to improve the sensitivity of the detectors threefold, are the latest in a long line of efforts to try to find these elusive ripples. After a few weeks of testing, the detectors officially went online and began collecting data last Friday.

The Science Behind LIGO:

The LIGO detectors work by using a complex technique called laser interferometry: where a laser beam is split, run down two perpendicular tubes, bounced off a pair of mirrors, and recombined at the source. At this point, scientists can tell exactly how far each has traveled. Say one beam traveled farther than the other, it could signal gravitational waves. Specifically, Using this technique, the LIGO scientists can measure spacetime fluctuations that are billions of times smaller than the size of an atom; Measurements this small are necessary because the waves would originate millions of light-years away.

Despite the fact that LIGO is capable of detecting such tiny spacetime fluctuations, it has yet to produce results.

Of course, that’s not to say that gravitational waves don't exist. In fact, back in the 70's and 80's, a pair of researchers—who went on to collect a Nobel Prize in physics for their work—manged to measure the energy of rotating neutron stars, and found that they lost energy at the exact rate predicted by the gravitational wave theory. This may be the most compelling evidence for gravitational waves yet.

The Future of LIGO:

The Advanced LIGO detectors will be active for three months, taking as much data as they can in their first run. Until the detectors reach the maximum level of sensitivity, they will alternate between additional runs and incremental upgrades and improvements. That should be enough, say scientists, to put the search to rest once and for all.

"We are there; we are in the ballpark now. It's clear that this is going to be pulled off," says physicist Kip Thorne, one of the pioneers of the experiment. He added that it would be “quite surprising” if the experiment came up empty-handed. In the event that it does,

“People would have to start to wonder what’s wrong with the astrophysics,” Fred Raab, head of the LIGO Hanford Observatory, points out.

In the event that it succeeds, not only would that help solve many astronomical mysteries, but it would also pave the way for future detectors. For instance, If LIGO is able to find traces of gravitational waves, that would give a green light to the European Space Agency’s (ESA) more powerful detector, the Laser Interferometer Space Antenna (LISA). Since it is a space-based detector, it can be built much larger than LIGO, which, in turn, increases sensitivity and range.

Detectors like LIGO and it’s future counterpart, LISA, certainly have the potential to revolutionize astronomy and astrophysics, if the theories behind them hold up. If nothing else, they give astronomers an opportunity to test other theories and predictions that relate to general relativity. Either way it’s a win for science.