Observations of Messier 54 Show the Lithium Problem Beyond Milky Way 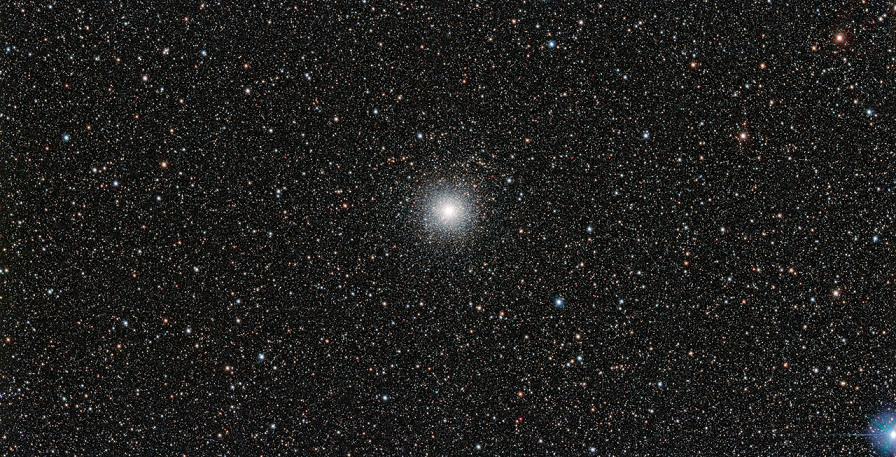 New image from the Very Large Telescope (VLT) at the European Southern Observatory's (ESO) Paranal Observatory in northern Chile shows a vast collection of stars, the globular cluster Messier 54 (M54). This cluster looks very similar to many others but it has a secret. Messier 54 doesn’t belong to the Milky Way, but is part of a small satellite galaxy, the Sagittarius Dwarf Galaxy. This unusual parentage has now allowed a team of astronomers, led by Alessio Mucciarelli of the University of Bologna, Italy, to use the VLT to test whether there are also unexpectedly low levels of the element lithium in stars outside the Milky Way. "Our measure of the lithium abundance in M54 represents the first determination of the primordial lithium amount in an extragalactic globular cluster," Mucciarelli told astrowatch.net. "This has been done exploiting the superb capabilities of the Giraffe spectrograph at the ESO Very Large Telescope and by using a brand new route to derive the initial lithium abundance of a stellar system, namely the use of the giant stars instead of the dwarf stars." Up to now it has only been possible to measure lithium in stars in the Milky Way.

Mucciarelli explained that this new approach has the advantage that allows to reach stellar systems too far for the observation of dwarf stars (the stars usually adopted to derive the abundance of lithium). "The derived primordial lithium abundance is about 2.3 dex (in logarithmical scale), in good agreement with the values obtained by the Milky Way stars (while the cosmological models provide abundances close to 2.7 dex, a factor of 3 higher than our value)." he said.

The Milky Way galaxy is orbited by more than 150 globular star clusters, which are balls of hundreds of thousands of old stars dating back to the formation of the galaxy. One of these, along with several others in the constellation of Sagittarius (The Archer), was found in the late eighteenth century by the French comet hunter Charles Messier and given the designation Messier 54.

For more than two hundred years after its discovery Messier 54 was thought to be similar to the other Milky Way globulars. But in 1994 it was discovered that it was actually associated with a separate galaxy — the Sagittarius Dwarf Galaxy. It was found to be at a distance of around 90.000 light-years — more than three times as far from Earth as the galactic centre.

Astronomers have now observed M54 using the VLT as a test case to try to solve one of the mysteries of modern astronomy — the lithium problem.

Most of the light chemical element lithium now present in the Universe was produced during the Big Bang, along with hydrogen and helium, but in much smaller quantities. Astronomers can calculate quite accurately how much lithium they expect to find in the early Universe, and from this work out how much they should see in old stars. But the numbers don’t match — there is about three times less lithium in stars than expected. This mystery remains, despite several decades of work.

There are several possible proposed solutions to the riddle. The first is that the calculations of the amounts of lithium produced in the Big Bang are wrong — but very recent tests suggest that this is not the case. The second is that the lithium was somehow destroyed in the earliest stars, before the formation of the Milky Way. The third is that some process in the stars has gradually destroyed lithium during their lives.

"The lithium problem remains an unsolved puzzle, but for the first time we have demonstrated that this is a universal problem concerning both the Milky Way and extra-galactic systems." Mucciarelli said.

This new above image of the cluster was created from data taken with the VLT Survey Telescope (VST) at the Paranal Observatory. As well as showing the cluster itself it reveals the extraordinarily dense forest of much closer Milky Way stars that lie in the foreground.

Asked about future observations that could help solve the lithium problem, Mucciarelli revealed that the team plans to extend the observations to other globular clusters never observed before within ~25 kiloparsecs from the Earth. "Finally, with the advent of 30-meter class telescopes (as the E-ELT of ESO) the use of giant stars will provide new constraints to the primordial lithium abundance in even more distant systems," he added.

This research was presented in a paper, “The cosmological Lithium problem outside the Galaxy: the Sagittarius globular cluster M54”, by A. Mucciarelli et al., to appear in Monthly Notices of the Royal Astronomical Society (Oxford University Press).

This article was originally written by Astro Watch; reposted with permission.