Nuclear Bombs and Shuttles: The Plausibility of propelling a Craft by Nuclear Explosions 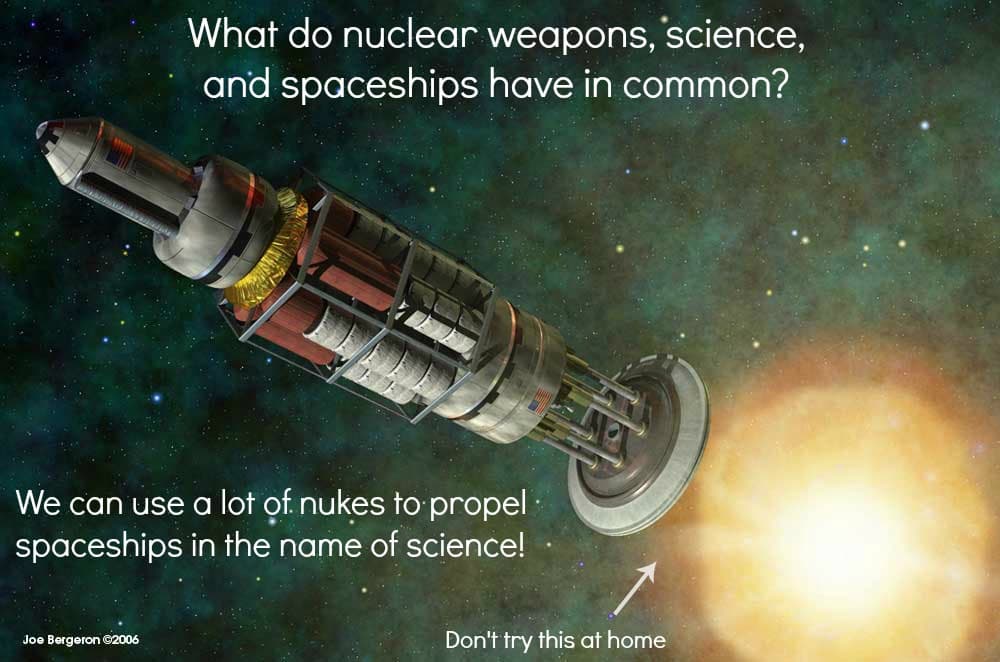 Space shuttles use chemical rockets as a means of propulsion. Unfortunately, this type of rocket propulsion has a rather serious weakness: it can’t make a space shuttle go at high speeds for very long. Although the Space Shuttle Atlantis reached a top speed of 28,292 km/h, it would still take it about 80 days to reach Mars. And that’s assuming that Mars is at its closest distance from Earth, which would be about 54.6 million km. That’s a relatively short time frame, but let us not forget that the Solid Rocket Boosters from the space shuttle last for about 6 minutes until they run out of fuel. In short, to travel really far distances, one would need a pair of Solid Rocket Boosters too big to be practical.

Luckily, there are more types of propulsion a space shuttle may use. One type of propulsion system is known as Nuclear Pulse Propulsion. NPP is able to accelerate a shuttle anywhere from 4% to 15% the speed of light by using nuclear bombs. Before delving into the specifics of NPP, let’s go back in time, to the 1940s, when the idea of NPP originated.

During 1946, Stanislaw Ulam, a Polish-American mathematician famous for participating in the Manhattan Project, proposed an experiment in which nuclear bombs could accelerate an object to very high speeds. In 1958, The Los Alamos Laboratory made a top-secret project, codenamed Project Orion, to test out Ulam’s theories.

Unfortunately, Project Orion was cancelled in 1963 due to the signing of the Limited Test Ban Treaty. This treaty proposed that the only testing of nuclear explosions may occur underground, effectively killing off the idea behind Project Orion, which was sending a small spacecraft to space by using NPP.

So, how would it work? The explosion from any explosive generates a shock wave that (given enough force) pushes apart everything it comes in contact with. A grenade has a shock wave, but it doesn't release a shock wave large enough to even jettison a large truck. Nuclear bombs, however, have the ability to create shock waves that are able to annihilate entire cities (effectively leveling them). Along these lines, if an explosion occurs from behind an object, that object should be hit by the shock wave and obtain some impulse out of it.

There is, however, a big con to NPP systems: the high amount of nuclear fallout a nuclear bomb produces. When conducting nuclear experiments, one does not generally want to harm or kill researchers via radiation poisoning. Project Orion’s implementation would have posed a risk to the lives of at least a few hundred people. Moreover, it would be difficult to ensure that the radiation did not leak into the shuttle and harm the passengers.

Thus, a space shuttle that uses NPP will need to have a very resilient set of shock absorbers and a large, concave-down plate in order for it to “take” as much of the shock wave as possible. Despite these drawbacks, making a system that could effectively use this method of propulsion would be amazing. If a space shuttle that uses NPP detonates a nuke from behind it every 100 meters for a consecutive amount of time, then the end result will be a shuttle that may be even able to travel to Proxima Centauri (the closest star to our solar system) within a human life-span!

Here is a great TED talk about Project Orion.