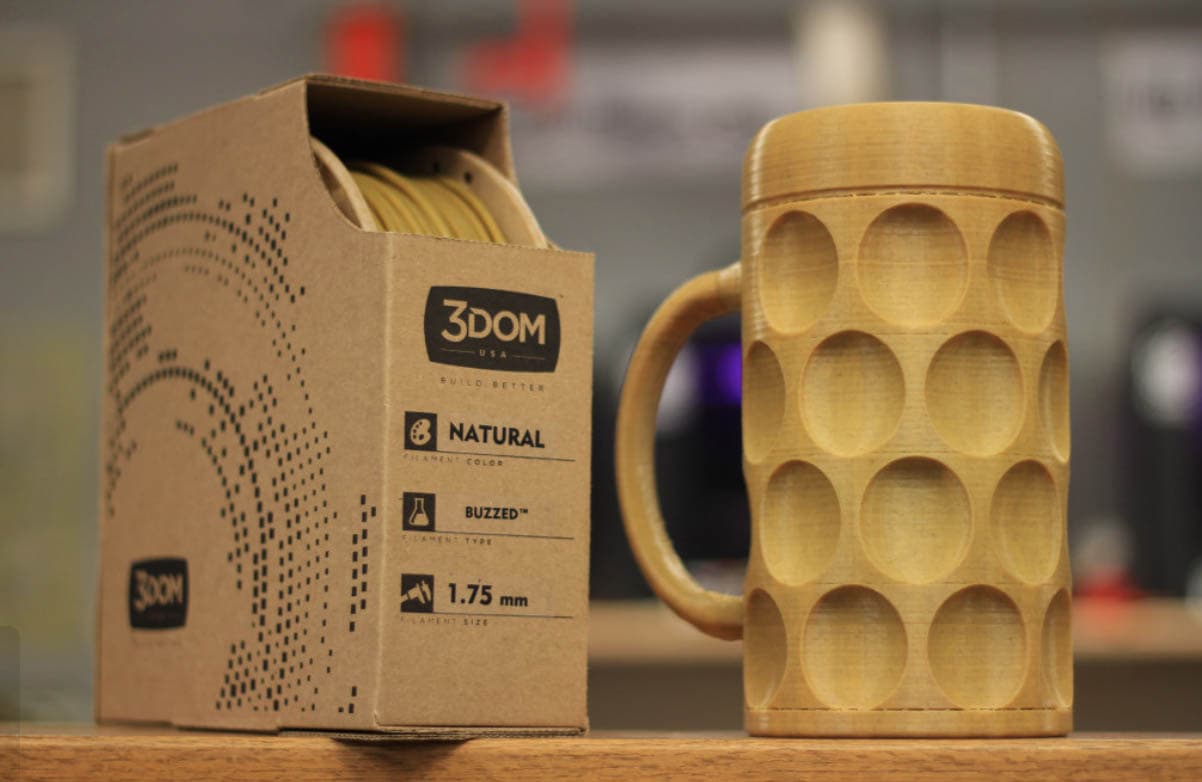 Almost all manufacturing processes result in a waste byproduct. The same is true for beer and coffee, two beverages that get many of us through the day. Unfortunately, much of the waste resulting from brewing both ends up in landfills.

3Dom, a company that produces material for 3D printers, has partnered with c2renew to create a beer-based filament called Buzzed made from those recycled waste products. c2renew is a biocomposite company that takes supposedly unusable material and makes it usable.

Printing With Beer and Coffee

Buzzed is the second in a line of bio-based products from 3Dom. Wound Up, the company's coffee-filled filament, is the other innovative design.

“Beer is one of our favorite things to drink besides coffee,” said c2renew co-founder Corey Kratcha. “And we have not seen anything like this. This is off the wall material.” Rather than seeing grains, true (wort and hop particles), and yeast end up in a landfill, 3Dom wants you to use it for your next 3D printing project.

The result is a special 3D printing material with visibly unique print finishes, almost like wood grain. The color of the filament is just what you'd see as the bartender begins pouring from the tap: a rich golden.

Don't worry, though. Your printing space won't spell like a brewery. This particular product doesn't have a scent at all. Wound Up, however, smells just like a morning at the coffee house.

Sustainability is one of 3Dom’s core values. In early 2015, the company introduced a filament and spool made from bioplastic, which is able to break down in landfills. More recently, the company collaborated with purging compound manufacturer Dyna-Purge and developed a non-chemical 3D printer cleaner.

3Dom's test lab reassures customers that you don't need a special printer to use the filament. One reviewer even notes that he printed two prosthetic hands on his machine using the filament. In fact, they tested Buzzed on multiple brands including MakerBot, LulzBot, FlashForge, and more.

Kratcha said that, down the line, "we will start coming out with some materials with really advanced mechanical properties." What does he mean exactly? c2renew co-founder Chad Ulven gave this hint: “It’s not your grandmother’s rope.”