Discovery of the Oldest Known Star: 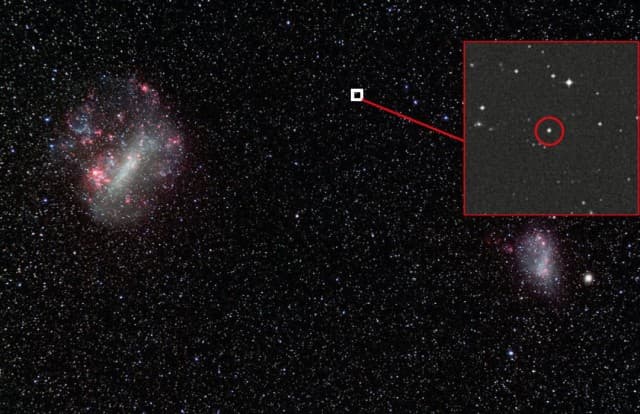 The universe is amazingly vast. The observable universe alone stretches some 93 billion light-years. Everything that we've ever seen, and everything we can ever hope to see, exists within this enormous expanse. But beyond this realm rests the unobservable universe, which is estimated to be some 10^23 times larger than the observable universe. Here, there is all the matter and energy that we can never witness or measure--it is forever beyond our reach. And this universe isn't just immense; it is immensely old.

The star is dubbed SM0313, and it is some 6,000 light-years from Earth. It was discovered using the ANU SkyMapper telescope at the Siding Spring Observatory. The discovery was later confirmed by the Magellan telescope in Chile.

The age was ultimately determined by the composition of the star. For example, the youngest stars (the stars which are currently springing into existence) formed from virtually every element listed in the periodic table. This is because the universe is now populated with a variety of elements. However, this was not the case shortly after the Big Bang.

In short, the Big Bang produced vast amounts of hydrogen, helium, and small amounts of lithium. Everything in the universe is made from these three elements. The the universe’s first stars were born of these elements. These stars fused hydrogen into helium and, most importantly,  produced the first instances of carbon and traces of heavier elements (like iron) when they went supernova. As this process continued, the universe was seeded with more and more heavy elements, eventually creating metal-rich stars and planets (like our own planet and Sun).

Looking at the above image, we can clearly see that the spectrum of SM0313 barely contains any absorption lines. The strong lines are from hydrogen, and carbon (at 4300A), and from the Earth's atmosphere (at 5800 and 6300A; not from the star itself). For comparison, the young metal-rich Sun would have thousands and thousands of dark lines, according to astronomer Anna Frebel, who is the study's co-author. This gives us proof that the star must have formed very shorty after the Big Bang.

Ultimately, the iron in this star is less than 0.01% of the mass of Earth's iron core. However, the star is one million times bigger than the Earth, some 60 times the mass of our own Sun.

You would need no more than an Australia-sized asteroid of iron and lots of carbon to make SM0313. Since this star lacks iron and other elements (in fact, it is an absolutely iron-starved star) we know that it is exceedingly, exceedingly old. Frebel expands on this idea, "Truthfully, we don't actually know how old SM0313 is. This is because, sadly, we can't determine a specific age of these kinds of objects. However, the chemical composition of SM0313 tells us that it is a second-generation star in the Universe which naturally makes this star nearly as old as the universe itself." In the end, the star's age was estimated using this data.

You can watch Frebel discuss the discovery in the video below.