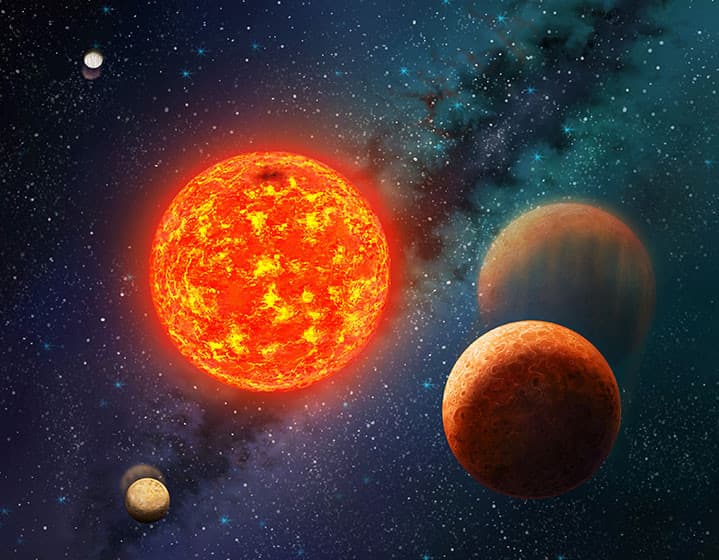 With a remarkable scheme that uses the motions of one planet to find another, astronomers have discovered a Mars-sized world 200 light-years from Earth. The discovery is equivalent to sensing a pin head at the distance of the Moon. The planet, Kepler 138b, is one of the smallest and lightest exoplanets yet found. It orbits a diminutive red dwarf star in the northern hemisphere constellation of Lyra.

“We’ve been able to tease out both the size and mass of this planet, says SETI Institute astronomer Jason Rowe, one of the Kepler mission team members making the discovery. “Therefore, we know its average density, and find that it is consistent with Mars in our own solar system.”

It didn’t have to be that way, Rowe notes. “Exoplanets come in all sizes and masses. Some are rocky spheres like Venus, Earth, and Mars, but others are puffed up gas balls. So it’s interesting to see that, at least in this case, a Mars-size planet could really be Mars-like.”

The technique used to find Kepler 138b harkens back to the historic discovery of Neptune. In the early 19th century, careful observations of the planet Uranus had showed slight irregularities in its orbital motions. Astronomers of the time suspected these might be due to the tug of another world somewhat farther from the Sun. That world, finally found in 1846, was Neptune.

A similar technique was used to make this new discovery. Kepler 138 has three known planets, sensed by the Kepler space telescope when they pass in front of the star and dim its light in a mini-eclipse, or “transit.” Study of the two planets that are exterior to Kepler 138b show that their transits sometimes occur an hour early or an hour later. This lack of planetary punctuality is caused by the gravitational tug of their innermost neighbor.

Once it was recognized that planetary interaction was causing the variation in transit times, straightforward application of Newton’s laws provided a mass for Kepler 138b. Its size had already been gauged from the amount of light it blocked when transiting its star. Combining mass and size yields a value for average density, one that is typical for a rocky world.

Kepler 138b may be Mars-like, but it’s unlikely to be an environment favored with biology. It’s a world in a tight orbit, and even though the red dwarf star it orbits is cooler than the Sun, the temperatures on Kepler 138b are going to be 400 to 500K, or similar to the inside of an oven set to “bake.” Another problem is that this world is probably tidally locked, which is to say that one side may always face its star, exacerbating the extreme temperatures.

The technique of using transit timing to measure the tug-of-war within tightly knit planetary systems promises to be extraordinarily fruitful. If future instruments can make transit measurements extending over a decade or more, it will be possible to determine the masses of exoplanets far more accurately than any other technique being used today.

A novel corollary of interacting planets is that they are, quite obviously, endlessly perturbing one another’s orbital period.

“Any extraterrestrials living in these systems would have to be expert watch makers,” says Rowe, “because the length of their year is always changing. In this case by hours, but in some others, by days.”