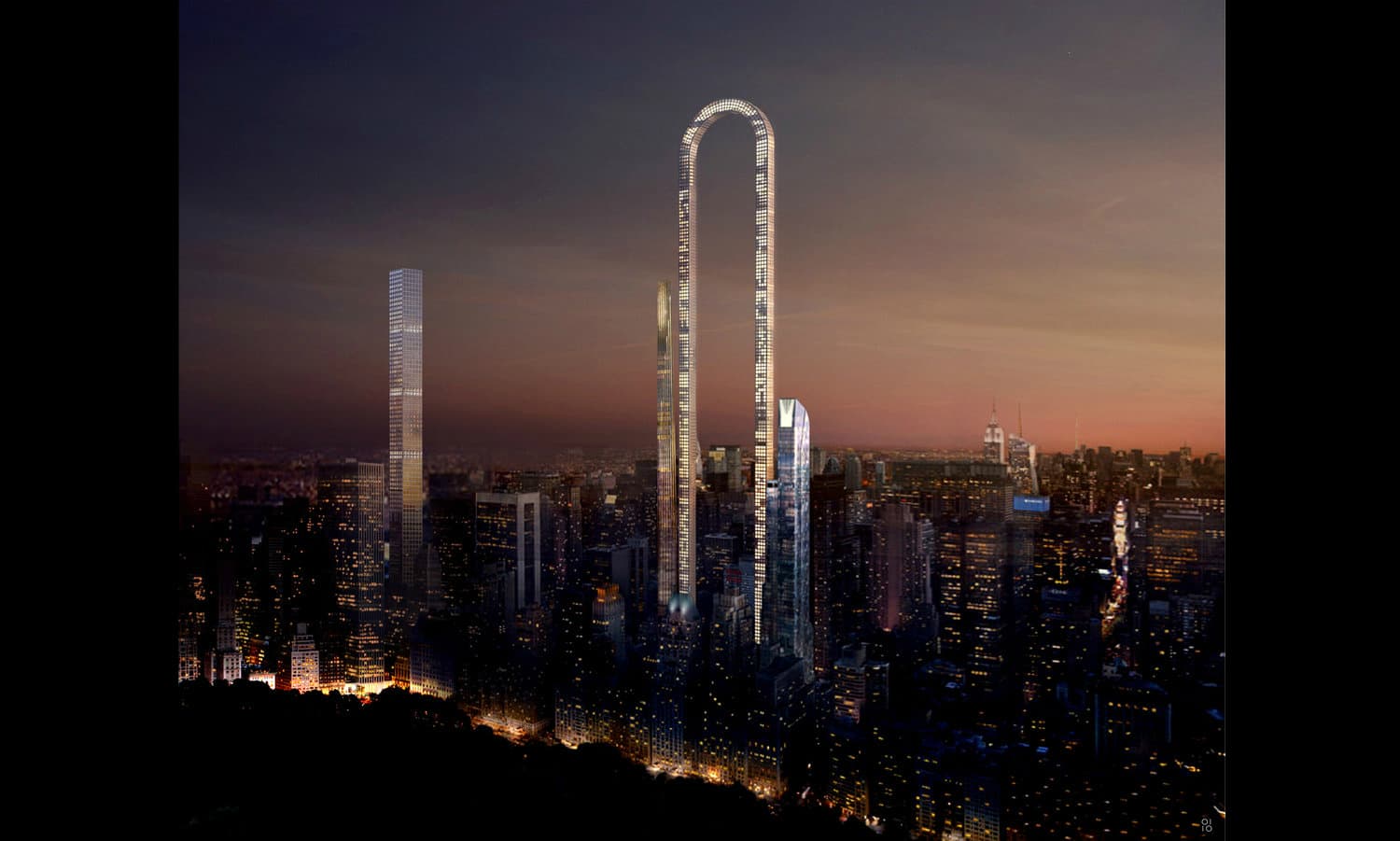 Maybe the only way isn't up after all: newly released concept drawings by a Greek architect for a skyscraper in Manhattan bend more than just minds.

According to architect Ioannis Oikonomou, New York’s zoning laws are prompting developers to explore new ways to maximize a building’s height. To that end, his studio is exploring substituting height with length.

Apart from being a novel addition to Manhattan’s impressive skyline, the structure — dubbed The Beg Bend — could essentially become a viable architectural solution that addresses the height limitations of buildings in the city. It could even be an answer to the city's expensive housing — giving the building the prestige of a high-rise while maximizing the limited space.

In renderings, the building is shown to be a 4,000-foot-long, glass-lined tower. It will also come equipped with an elevator that can travel in curves, horizontally, and in continuous loops.

“If we manage to bend our structure instead of bending the zoning rules of New York we would be able to create one of the most prestigious buildings in Manhattan. The longest building in the world."

Also, interestingly, if you were to stretch The Big Bend out vertically, it would be double the height of the tallest buildings today.

Read This Next
Brands We Love
Sustainable Urban Living Isn’t Just Necessary – It’s a Giant Opportunity
Futurism
Pricey NYC Housing Now Has an Added Cost: Your Personal Data
Futurism
Apple Employees Keep Walking Into Windows at High-Tech New Headquarters
Futurism
Today, Michio Kaku Described What Life Will Look Like in Twenty Years
Futurism
Tree Skyscrapers and Underwater Restaurants: See the Most Futuristic Designs of the Year
More on Future Society
Rough
Yesterday on futurism
Elon Musk's Twitter Is Reportedly Failing Miserably to Contain Horrific Child Abuse Content
YouTube Propaganda
Yesterday on the byte
Experts Say There's Something Very Weird About North Korean YouTubers
Bird Crap
Feb 4 on the byte
It Looks Like Elon Musk Is Actually Building a Twitter Payment Platform
READ MORE STORIES ABOUT / Future Society
Keep up.
Subscribe to our daily newsletter to keep in touch with the subjects shaping our future.
+Social+Newsletter
TopicsAbout UsContact Us
Copyright ©, Camden Media Inc All Rights Reserved. See our User Agreement, Privacy Policy and Data Use Policy. The material on this site may not be reproduced, distributed, transmitted, cached or otherwise used, except with prior written permission of Futurism. Articles may contain affiliate links which enable us to share in the revenue of any purchases made.
Fonts by Typekit and Monotype.