These Incredible Images Reveal the Evolution of NYC

The big apple no longer consists of rolling hills. 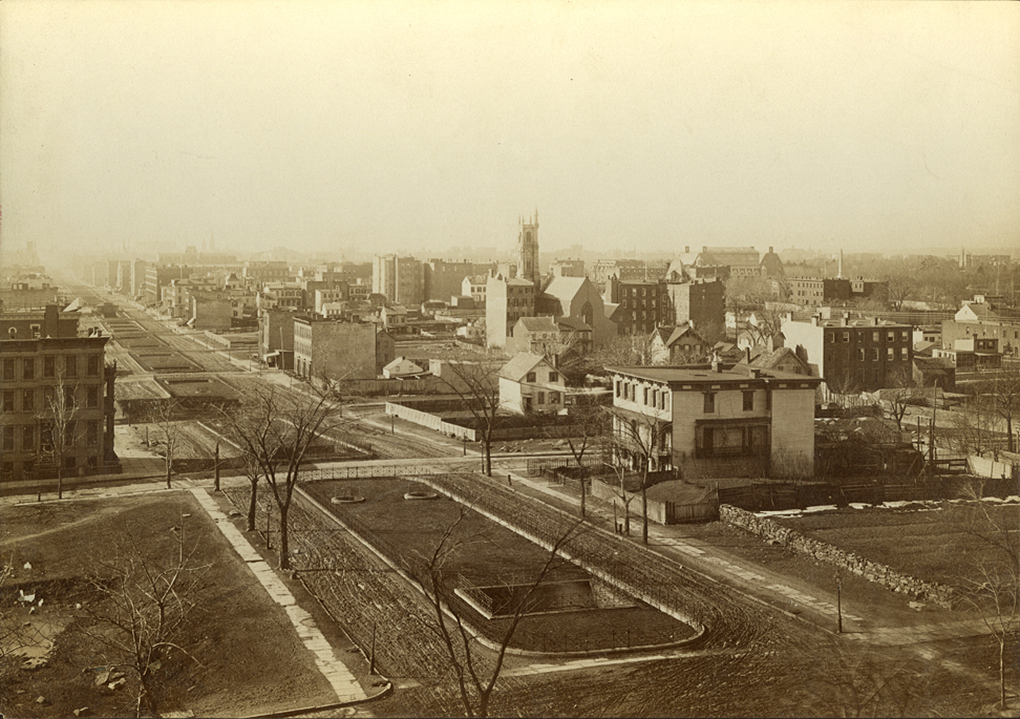 Image by Peter Baab/Museum of the City of New York

While its place on the list is the subject of great debate, there is no doubting that New York City is among the greatest cities in the world. Of course, the city hasn't always been a concrete jungle of skyscrapers, taxi cabs, and pizza rats, but it is still quite difficult to imagine that New York was, once upon a time, fertile farmland.

The Museum of the City of New York has collected a great number of paintings, drawings, lithographs, and photographs documenting the evolution of the city into the "...rows of monotonous straight streets, and piles of erect buildings" that famous landscape architect Frederick Law Olmsted predicted.

Even at the time of the American Revolution, the Manhattan landscape was much greener than you will see today, with rolling hills and more trees than buildings or people. Today, the site is a public space called Bennett Park.

The second half of the 19th century saw the beginnings of the demolition of those hills to make way for level roads as they began to sprawl across the island.

Tenement buildings began to be erected to house the city's poor and the many immigrants who began pouring into the United States through Ellis Island.

Thus began the formation of "superblocks," which became the template for growth for New York even through today.

Since then, New York has grown exponentially (with an estimated population of 8.5 million and growing), and the urban sprawl that started in Manhattan has long since spread to the outer boroughs. Still, the city is showing no signs of stopping now. As the author O. Henry once said of New York, "It'll be a great place if they ever finish it."

Read This Next
From Our Partners
This Is What The Future of Farming Looks Like
Brands We Love
This Innovative Crowdfunding Platform Lets You Invest in US Farmland
Futurism
Pricey NYC Housing Now Has an Added Cost: Your Personal Data
Futurism
To Slow Urbanization, China Is Capping Populations In Two Of Its Biggest Cities
Futurism
Blockchain Could Help Restaurants Make Sure the Seafood You Order Is Actually What Lands on Your Plate
More on Future Society
Down in Flames
Yesterday on the byte
Elon Musk Apparently Thinks Twitter Is a "Flaming Dumpster Rolling Down the Street"
All Tomorrow's Pa...
Yesterday on the byte
Party Startup Says It Has Zero Plans to Make Any Money With Investors' Funds
Primate Theft
Tuesday on the byte
It Was a Very Bad Weekend for Monkeys Being Stolen From Zoos, Apparently
READ MORE STORIES ABOUT / Future Society
Keep up.
Subscribe to our daily newsletter to keep in touch with the subjects shaping our future.
+Social+Newsletter
TopicsAbout UsContact Us
Copyright ©, Camden Media Inc All Rights Reserved. See our User Agreement, Privacy Policy and Data Use Policy. The material on this site may not be reproduced, distributed, transmitted, cached or otherwise used, except with prior written permission of Futurism. Articles may contain affiliate links which enable us to share in the revenue of any purchases made.
Fonts by Typekit and Monotype.