The U.N. Is Currently Meeting To Negotiate A Complete, Global Ban on Nuclear Weapons

Scientists created the bomb. Now, they want to see it banned. 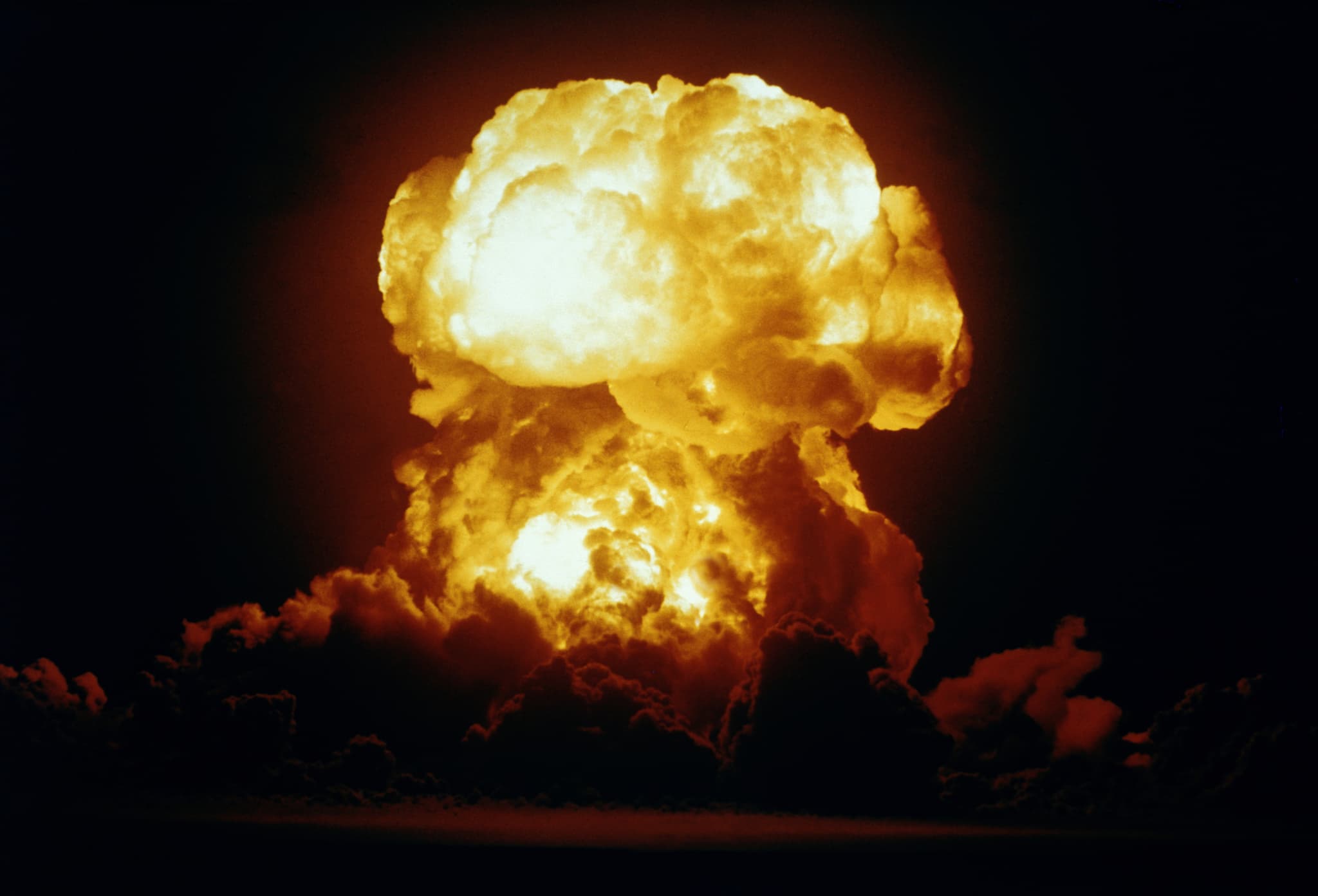 Today, delegates from most of the United Nations member states are gathering in New York to negotiate a nuclear weapons ban. More than 2,500 scientists from 70 countries have signed an open letter in support of the nuclear disarmament negotiations. If successful, their words could urge the UN to stigmatize nuclear weapons like biological and chemical weapons, with the ultimate goal being to create a "world free of these weapons of mass destruction."

Neuroscience professor and Nobel Laureate, Edvard Moser, believes nuclear weapons represent one of the biggest threats to our civilization:

"With the unpredictability of the current world situation, it is more important than ever to get negotiations about a ban on nuclear weapons on track, and to make these negotiations a truly global effort."

Other notable scientists in support of the ban are not lacking. The list includes 28 Nobel Laureates—such as Peter Ware Higgs and Leon N. Cooper; former U.S. Secretary of Defense, William J. Perry; and CERN physicists, such as Jack Steinberger. The letter will be delivered in the UN General Assembly Hall to Her Excellency Ms. Elayne Whyte Gómez from Costa Rica, who will preside over the negotiations.

The letter, presented by the Future of Life Institute, acknowledges that scientists may have been the ones who invented nuclear weapons, but that it is up to the people living today to dictate how this technology should be used—or rather, should never be used. For example, nuclear-induced winter could trigger a global mini ice age, which could lead to a complete collapse of the global food system and kill most of the people on Earth.

And that's just one potential outcome.

Ultimately, such a result would occur even if the nuclear war involved only a small fraction of the roughly 14,000 nuclear weapons that today’s nuclear powers control.

In total, nine countries (that we know of) possess nuclear weapons: The U.S., Russia, the U.K., France, China, Israel, India, North Korea, and Pakistan. The first five are the only countries allowed to have these weapons, according to the 1970 Non-Proliferation Treaty, an agreement that nations signed saying they would not release nuclear weapons, or in any way help others acquire or build them. Furthermore, the countries promised, "to move toward a gradual reduction of their arsenals of nuclear weapons with the ultimate goal of complete nuclear disarmament."

Unfortunately, the United States and a number of other nations that actually have nuclear weapons boycotted the talks, saying that "the time was not right and that a ban would be ineffective." Ambassador Nikki R. Haley, from the United States, told reporters outside the General Assembly that the ideals are currently just a utopian dream: “There is nothing I want more for my family than a world with no nuclear weapons, but we have to be realistic. Is there anyone who thinks that North Korea would ban nuclear weapons?”

Russian Foreign Minister Sergey Lavrov said that the state supported nuclear talks, in general, "We are ready to discuss the possible further gradual reduction of nuclear capabilities." However, he said that Russia was not in support of talks of this severity or gravity. "We are ready to discuss this issue proceeding from the growing urgency of making this process multilateral," he noted, adding the criticism that the discussion was too far-reaching: "Efforts to coerce nuclear powers to abandon nuclear weapons have intensified significantly recently. It is absolutely clear that the time has not yet come for that,"

That said, the talks are supported by 120 nations.

A Bomb of Unprecedented Power

In 1939, just after World War II broke out, physicist Albert Einstein and his colleague Leo Szilard described a “bomb of unprecedented power” that could be made using nuclear fission. The two men urged the U.S. government to race to build this so-called “atomic bomb” before Germany could.

Six years later, President Harry S. Truman would order atomic bombs to be dropped on the Japanese cities of Hiroshima and Nagasaki. Just five years after that, 54 percent of the original population had died from the two explosions. Those who survived had to deal with mental and physical trauma including burns, disfiguration, severe scar formations, blood abnormalities, sterility, leukemia, birth defects in children, cataracts, and cancer.

Einstein would later regret his involvement in the creation of the bomb, saying: "had I known that the Germans would not succeed in producing an atomic bomb, I would have never lifted a finger."

But it was too late for Einstein. And our nuclear history didn't end with him. Today, as political tensions rise, the scientists who have signed in support of the ban believe a nuclear war is more likely than one may expect:

There is a steady stream of accidents and false alarms that could trigger all-out war, and relying on never-ending luck is not a sustainable strategy. Many nuclear powers have larger nuclear arsenals than needed for deterrence, yet prioritize making them more lethal over reducing them and the risk that they get used.

Former U.S. Secretary of Defense William J. Perry even noted, "the probability of a nuclear calamity is higher today, I believe, that it was during the cold war."

It is evident that the scientific community, as a whole, feels strongly about the issue at hand, and believes the issue deserves a certain level of urgency. Negotiations are sure to be heated, but, as Norwegian neuroscience professor May-Britt Moser, a 2014 Nobel Laureate in Physiology/Medicine, says, "In a world with increased aggression and decreasing diplomacy – the availability nuclear weapons is more dangerous than ever. Politicians are urged to ban nuclear weapons. The world today and future generations depend on that decision."

Read This Next
Futurism
This UN Tracker Shows That Even Far-Fetched Voluntary Pledges Actually Make a Difference
Futurism
4 Astounding Things About Russia's (Supposed) New Weapons
Futurism
Experts Weigh in on the U.S. Government's Plans to Loosen Nuclear Weapon Constraints
Futurism
International Campaign to Abolish Nuclear Weapons Receives 2017 Nobel Peace Prize
Futurism
Experts Say We Must "Restrict the President's Power to Wage Nuclear War"
More on Future Society
Rough
Yesterday on futurism
Elon Musk's Twitter Is Reportedly Failing Miserably to Contain Horrific Child Abuse Content
YouTube Propaganda
Yesterday on the byte
Experts Say There's Something Very Weird About North Korean YouTubers
Bird Crap
Feb 4 on the byte
It Looks Like Elon Musk Is Actually Building a Twitter Payment Platform
READ MORE STORIES ABOUT / Future Society
Keep up.
Subscribe to our daily newsletter to keep in touch with the subjects shaping our future.
+Social+Newsletter
TopicsAbout UsContact Us
Copyright ©, Camden Media Inc All Rights Reserved. See our User Agreement, Privacy Policy and Data Use Policy. The material on this site may not be reproduced, distributed, transmitted, cached or otherwise used, except with prior written permission of Futurism. Articles may contain affiliate links which enable us to share in the revenue of any purchases made.
Fonts by Typekit and Monotype.