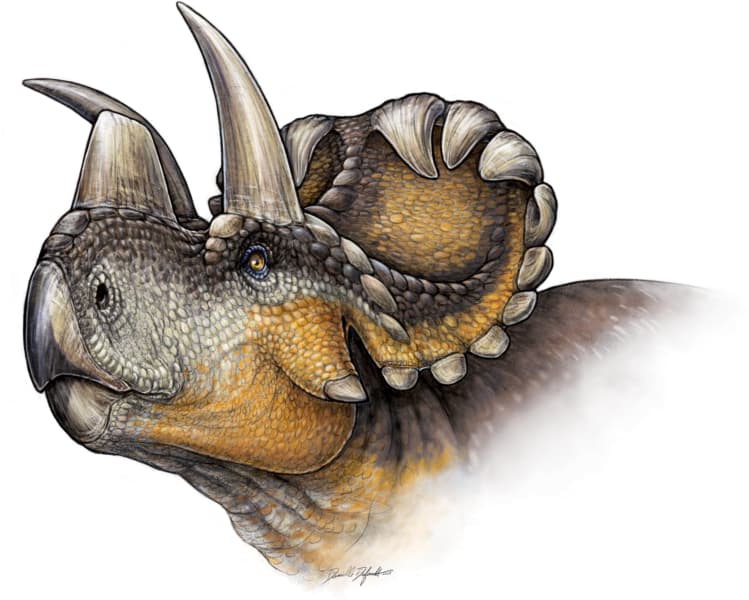 Scientists have recently unearthed a new species of dinosaur. Named 'Wendiceratops pinhornensis,' the dinosaur was discovered during a four-year excavation from 2011-2014 in the Oldman Formation. Paleontologists Dr. David Evans (Royal Ontario Museum), and Dr. Michael Ryan (Cleveland Museum of Natural History), found over 200 bones belonging to at least three adults and one juvenile, which are now on display at the Royal Ontario Museum in Toronto.

The Wendiceratops, which was about 20 feet long and weighed over a ton, lived approximately 79 million years ago—11 million years before Triceratops. In addition to belonging to the Triceratops family, it was also a herbivore, with a diet consisting mostly of ground-based foliage. But the most interesting thing about it, by far, was its decorative facial features, which include a large nose horn, two horns over its eyes, and a number of curved hook-like horns around the edges of its frill.

"The number of gnarly frill projections and horns makes it one of the most striking horned dinosaurs ever found," says Evans.

These decorative horns are key to understanding the evolution of the Triceratops and other related dinosaurs, say the paleontologists. Wendiceratops is one of the oldest known members of the horned dinosaur (ceratopsian) family, and the oldest known example of a dinosaur with a tall nose horn. Its discovery could help scientists learn how this type of dinosaur evolved.

"Wendiceratops helps us understand the early evolution of skull ornamentation in an iconic group of dinosaurs," says Evans.

Already, the discoveries are reshaping our ideas of the Ceratopsidae family's horns.

By the time Wendiceratops came into the picture, the Ceratopsidae had already begun splitting into two subfamilies: the Centrosaurinae and the Chasmosaurinae.

Wendiceratops—also part of the Centrosaurinae subfamily—had already developed large nasal horns. But members of what would become the Chasmosaurinae had not yet developed the prominent nose horn that would characterize later members like Triceratops. Because the two lineages had already diverged, this implies that the nasal horns of the Ceratopsidae evolved twice, instead of once as scientists previously thought.

Their findings have been reported in the latest issue of PLOS ONE.