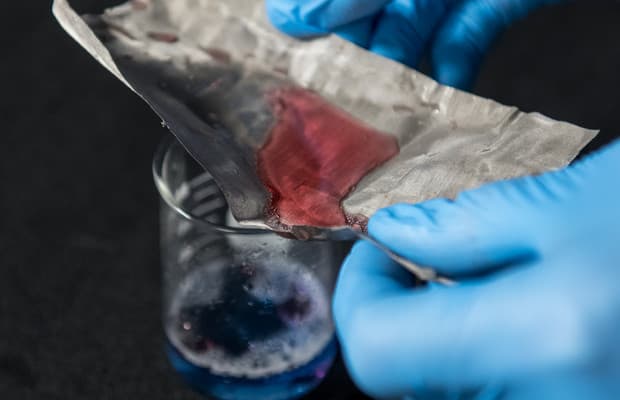 Canadian authorities are catching some heat after failing to respond for several hours to an oil spill in Vancouver’s English Bay last week, and recovering very little of the spilled oil despite calm conditions and adequate notice. In addition to the delays, the incident also illustrated the limitations of current technology;even in ideal conditions, for cleaning up the gooey, viscous petroleum products can be harmful to marine wildlife.

A new development at the Ohio State University might change all that. Researchers there have announced that they have developed a nanoparticle coating for steel mesh which allows water to pass through, while trapping oil on one side. The mesh essentially becomes a net for catching oil.

The idea was inspired by the natural coating on lotus leaves that allows them to repel water. Oil, however, will stick to leaves. The scientists wondered if they could create a microscopic coating with the opposite effect.

What they hit upon was coating the mesh with silica nanoparticles to provide a surface for the substance to adhere to, and then layering a polymer substance laced with a surfactant onto it. The surfactant, which lowers the surface tension between two liquids—or a liquid and a solid in this case—repels the oil but allows the water to pass through the mesh.

The result is a material that can effectively be used to sieve oil directly out of water. The scientists estimate that the material could be created at a cost of less than a dollar per square foot. Storage would be relatively easy since it is flexible—the coated steel mesh does not appear, outwardly, to differ at all from uncoated mesh, and can be handled similarly. The coating is only a few hundred nanometers thick. And all of the substances that go into both the coating and mesh are non-toxic and environmentally friendly, so there are no side effects to the deployment.

There are many other potential applications for the substance, however. The researchers selected silica for the coating in order to make it as transparent as possible. It could then be used on windows or coatings for glass in other applications.

The technology might also be adapted to detecting oil spills as well as cleaning them up. Small detectors that measure oil collected in mesh while allowing water to flow freely could be inexpensive and easy to manufacture, and increase the ease of detecting spills or sampling their severity in waters where they have occurred.

This mesh captures oil (red) while water (blue) passes through.