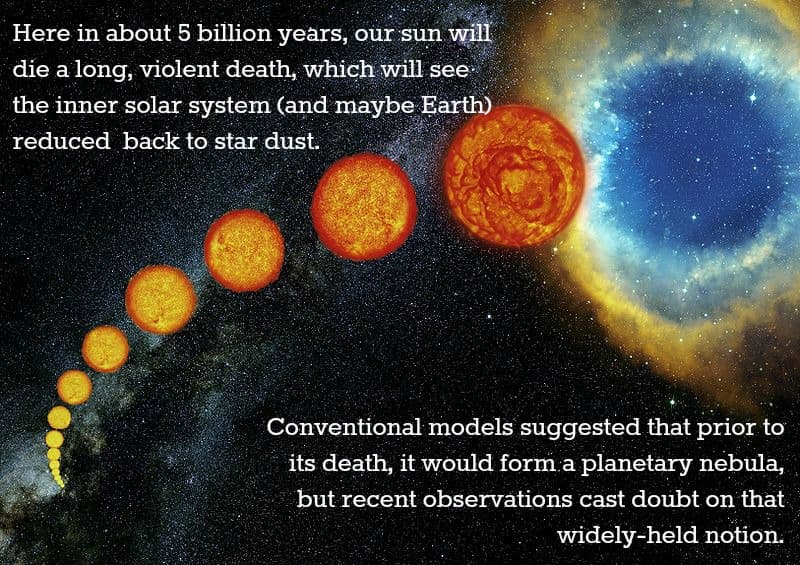 You have probably heard that the Sun will turn into a red giant in about 5 billion years. And you probably know that this will result in not-so-fun times for any being still on planet Earth. As it transitions from a main sequence star into a red giant, the outer layers of the Sun will expand across the solar system. When this happens, our life-giving star will turn into an object of utter destruction. The Sun will expand beyond Mercury. It will expand beyond Venus. It will sweep across the entirety of the inner solar system in a mere 5 million years. When it finally stops its expansion, the searing tips of the solar surface will rest beyond the bounds of Earth’s orbit. In short: if we aren’t knocked out of the solar system as the Sun expands, or moved into a larger orbit as it loses mass...we will be consumed.

But what happens to the Sun after it becomes a red giant? We have a pretty good handle on the fate of our own world...but what about the Sun itself?

Ultimately, most scientists believe that the Sun will become a planetary nebula. As is progresses though the red giant stage, the outer envelope of the Sun will be blown off into space. This is known as a planetary nebula—an expanding shell of hot gas that streams across the solar system after it is expelled from a star (the nebula itself is essentially the outer layers of the star). After it expels its outer layers, the core of the Sun will contract, and it will become a white dwarf. Eventually, scientists believe that the Sun will turn into a black dwarf (a stellar object that has cooled down to the temperature of the cosmic microwave background). And so the Sun will eventually become an invisible blip in the cosmos…radiating almost nothing.

However, scientists recently uncovered evidence that throws a wrench into our understanding of the Sun’s evolution. New data from globular cluster stars indicates that a stellar object must be at least 20% heavier than the Sun to form a planetary nebula. Previously, it was believed that stars that are about 1 solar mass (the size of the Sun) form planetary nebulae. Yet, this new research suggests that most planetary nebulae stem from binary systems. In short, “without a companion the Sun may not surpass the mass limit required to generate the hot glowing (ionized) nebula.”

So what does this mean about the Sun’s evolution? How will our star end its life? Ultimately, we’re not sure. Further research of these binary systems (and of planetary nebulae in general) is needed in order for scientists to formulate more accurate hypotheses.