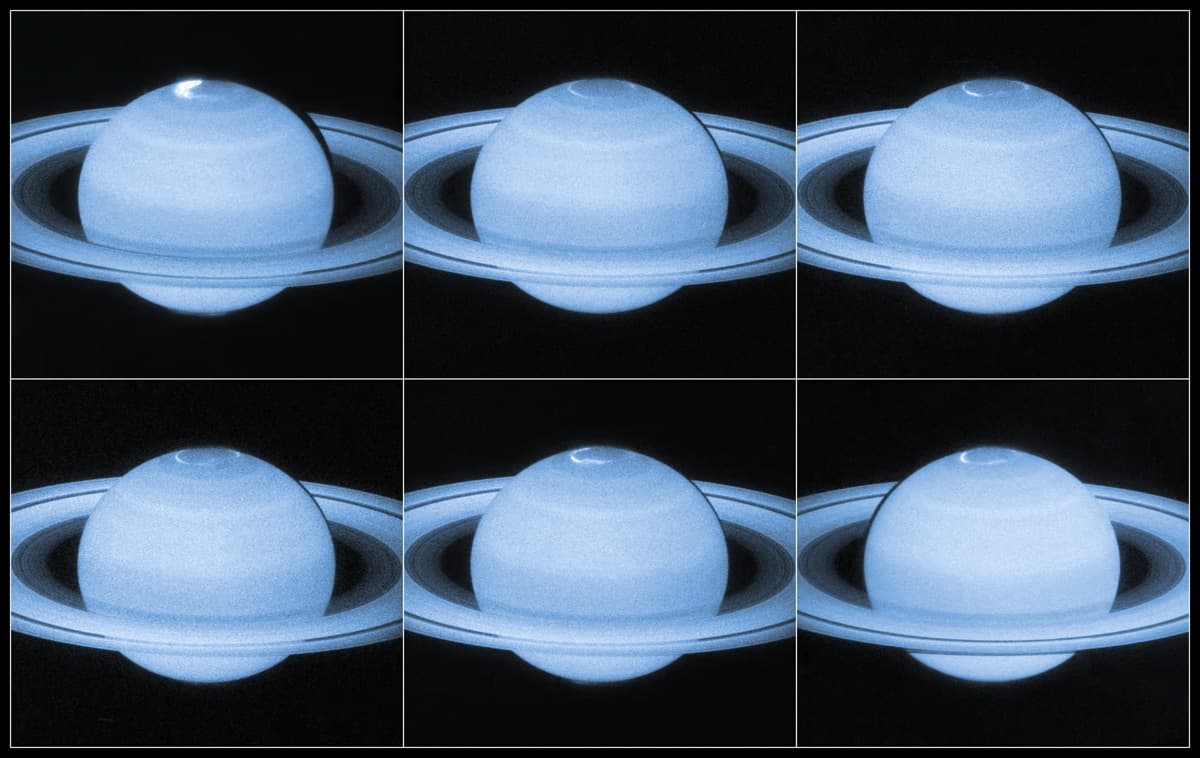 In this series of images, we can see the ethereal flashes of Saturn's northern lights as they dance across the upper atmosphere of the gas giant. The ultraviolet images released from the European Space Agency (ESA) show the impact that streams of highly energized particles shot out by the Sun have on Saturn's magnetic field.

The images were recently released by the ESA. In the release, ESA officials state that, "Saturn was caught during a very dynamic light show. Some of the bursts of light seen shooting around Saturn’s polar regions travelled more than three times faster than the speed of the gas giant’s roughly 10-hour rotation period!" The images were captured by the Hubble Space Telescope April and May of 2013, and they may help scientists learn more about how the planet's auroras change, as they allowed scientists to spot new details about the choreography of the northern lights.

"Saturn has a long, comet-like magnetic tail known as a magnetotail — as do Mercury, Jupiter, Uranus, Neptune and Earth," NASA officials said of the observations in a statement. "This magnetotail is present around planets that have a magnetic field, caused by a rotating core of magnetic elements. It appears that when bursts of particles from the sun hit Saturn, the planet’s magnetotail collapses and later reconfigures itself, an event that is reflected in the dynamics of its aurorae [auroras]."

The latest images by Hubble capture the beauty of this event in amazing detail. Since it went into orbit, piggybacking on the Discovery Space shuttle in the spring of 1990, the Hubble Space Telescope has revolutionized everything we know about our wonderful universe. Hubble has taken millions of photos of stars in various stages of development, made precise estimates about the age of the universe, and it has presented us with a myriad amount of information on cosmological events that were previously just beyond our understanding. After a series of setbacks, most famously the “Challenger” incident, the $1.5 billion dollar project, the Hubble Space Telescope (which got its name from Edwin Hubble, an accomplished astronomer), was finally deployed into space on April 24th of 1990.

On our planet (and other planets in the cosmos), the aurora occurs when charged particles from the Sun are blown to Earth on solar winds. These charged particles interact with the Earth’s upper atmosphere and create a bright glow in the sky, which is known as aurora borealis (the northern lights) in the north, and the aurora australis (the southern lights) in the south.