Most of the images we’ve seen of the central portion of our galaxy are zoomed out a bit, which (in my opinion at least) destroys the sense of scale when observing the Milky Way. This image, on the other, is perfectly effective (so effective, in fact, we made it our cover photo!).

The area imaged here spans a mere 30° x 20°, which equals out to about twice the area of sky one would observe with an outstretched hand.

Stéphane Guisard, from the ESO’s Parnal Observatory in Chile, took this image. It is an ASTONISHINGLY large 24,000 x 14,000 pixels, for a total of more than 330 MILLION pixels. The image starts at roughly the Sagittarius constellation (the Milky Way’s Center, the Trifid, and Lagoon Nebulae can be seen on the left). And continues on to the Scorpius constellation, where the Cat Paw nebula is visible around NGC 6357 (including the Antares [the colorful bunch on the far side] and the Rho Ophiuchus regions too). Also pictured here are millions of stars (still less than a thousandth of all of the stars in our entire galaxy) that are difficult to discern individually to the naked eye. Those big black places are not areas lacking stars, but dense interstellar dust clouds that are obscuring light from the background stars buried within them.

Even more incredible is the fact that this is a composite image taken in different wavelengths to create a “true color” version of the region, meaning this thing is literally representative of more than one billion pixels of information about this region in our home galaxy. 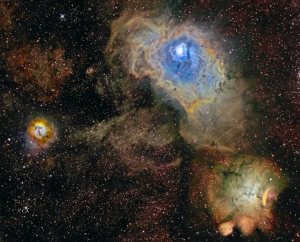 If this makes any of you feel small, you must remember that it was tools WE built that were able to capture this image. Furthermore, we may be the only people in the entire universe (our galaxy at the very least) that can see this. Amazing.

Think this is cool? You must check out Gigagalaxy Zoom, where you can explore our galaxy and all of the constellations!