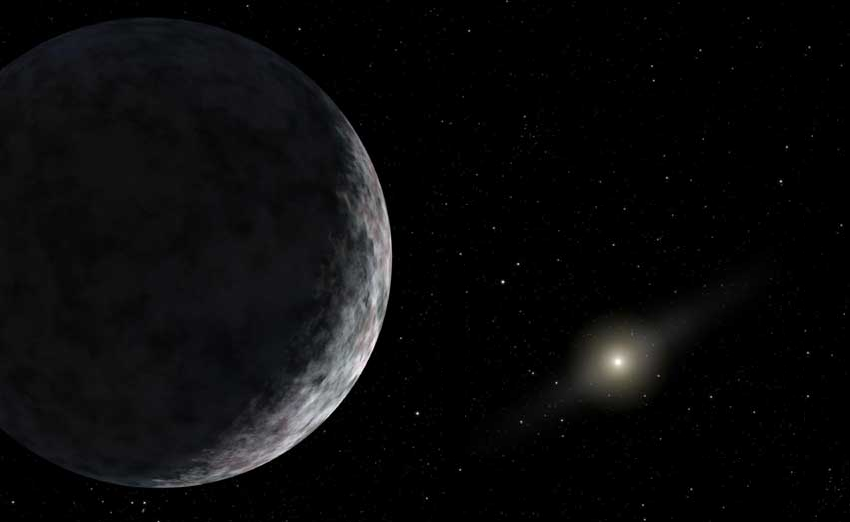 Presently, our solar system is known to contain 4 fully-fledged rocky worlds: Mercury, Venus, Earth and Mars; 2 ice-giants: Neptune and Uranus; 2 gas-giants, Saturn and Jupiter; 5 dwarf-planets, Ceres. Pluto, Eris, MakeMake, Haumea; around 100 moons; and an unknowable number of comets, asteroids and minor planets. Indeed, we've only begun to understand the full scope of our local corner of our galaxy, and new information emerges on a monthly-basis, yet there a number of seemingly obvious things that remain unknown.

For instance, long before Pluto's existence was deduced, astronomers scoured the outer solar system in search of another large planet, which, they believed, would explain many peculiarities surrounding the outermost planet and beyond. These peculiarities mostly center on the strange distribution of objects in the Kuiper belt — the cold, icy region between Neptune and the Oort Cloud — and how their orbits are more eccentric than expected

Both oddities seem to suggest a planet lurks in the shadows, so large, it has an effect on distribution of rocky objects, and the orbit of each of them.  It's certainly not a new idea. In fact, this is just one of several iterations of the 'missing planet' hypothesis. Others postulate that instead of a hidden planet, one was flung from our solar system early on, before it settled into its final configuration (another hypothesizes that the Sun has a low-mass companion somewhere). All however, remain speculative since no true observational evidence has surface.

Now, new numerical calculations, carried out by researchers from the Complutense University of Madrid and the University of Cambridge, have once again breathed life into the debate.

Current accepted models say these objects should be randomly distributed, and meet a stringent list of orbital characteristics, which include: "a semimajor axis with a value close to 150 AU (1 AU is the distance between the Earth and the Sun), an inclination of almost 0°, and an argument or angle of perihelion (closest point of the orbit to our Sun) also close to 0° or 180°."

Of course, our models don't agree with observations here. In fact, theories and observations seem to violently clash. Per the press release, "the values of the semimajor axis are very disperse (between 150 AU and 525 AU), the average inclination of their orbit is around 20°, and argument of perihelion -31°, without appearing in any case close to 180°."

“This excess of objects with unexpected orbital parameters makes us believe that some invisible forces are altering the distribution of the orbital elements of the ETNO and we consider that the most probable explanation is that other unknown planets exist beyond Neptune and Pluto,” remarks Carlos de la Fuente Marcos, a scientist from UCM. who also co-wrote the study.

“The exact number is uncertain, given that the data that we have is limited, but our calculations suggest that there are at least two planets, and probably more, within the confines of our solar system,” he adds.

In order to come to their conclusion, the team examined something called the Lidov–Kozai mechanism, which looks at how the gravitational force of a large object can perturb the orbit of a much smaller and more distant object, pushing it from a circular orbit into a more elliptical one. Take the relationship between Jupiter and comet 96P/Machholz 1, for instance. 96P/Machholz 1 is small by any standard, while Jupiter, with a diameter spanning 86,881 miles (139,822 km) across, is simply gargantuan. They might be David and Goliath on a cosmic scale, but Machholz remains locked in a Kozai resonance with Jupiter. As such, some of its eccentricities, particularly orbital ones, are believed to be inherited.

This, according to a paper the team published late last year,  might “provide the key to explain the puzzling clustering of orbits around argument of perihelion close to 0° recently found for the population of ETNOs,”

Another object of interest — a dwarf planet found lurking in the Oort Cloud in 2012, dubbed 2012 VP113 — was analyzed. It's notable for having the largest perihelion of any known object in our solar system, including that of Sedna.

So, how exactly did it wind up in such an extreme orbit? Well, perhaps we can thank a dark super-Earth exoplanet, one around ten times heavier than Earth, for that.

From their second paper, entitled "Extreme Trans-Neptunian Objects and the Kozai Mechanism: Signalling the Presence of Trans-Plutonian Planets," they note in their abstract:

Although their findings are as promising as they are surprising, they are in no way, shape or form concrete. In fact, the team readily admits that their conclusion conflicts with current models. However, we're finding new planetary systems all the time, and they show that planets can form much farther out than we expect. HL Tauri, the young planetary system recently pictured by ALMA, definitely fits the bill. The star is much younger than the Sun and more massive, yet a planet already appears to be forming around 100 AU out.

Plus, the sample size is pretty small, encompassing only 13 trans-Neptunian objects. Only time, and of course a larger pool of data to draw from, will tell.  “If it is confirmed, our results may be truly revolutionary for astronomy,” says de la Fuente Marcos.

You can read the full press release here.