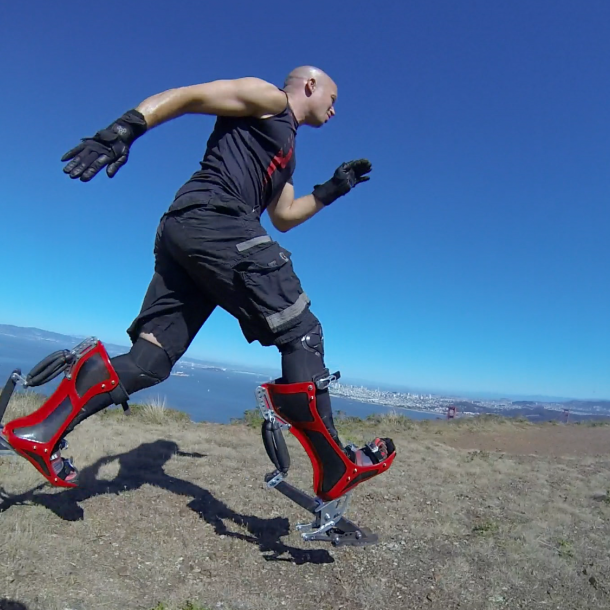 Bionic boots let you run as fast as a car (well, a slow moving car). These springy shoes mimic an ostrich's gait, and though it may look a little funny, they let you travel at up to 25 miles per hour (40 km/h). This prototype was developed by San Francisco-based inventor Keahi Seymour.

So, how do they work? To be metaporical, the shoes have springs on the back that imitate the achilles tendon of an ostrich, and they provide the wearer with more down force when running

With their wide, springy gait, ostriches can reach speeds of 40mph (70 km/h), covering up to 16ft (5 meters) in a single stride. As a child, Keahi Seymour was fascinated by what appeared to be the effortless speed and agility of these creatures, making them the fastest running birds on the planet.

Now the inventor has created a prototype gadget that he claims will allow humans to experience what it’s like to reach these incredible speeds. They have been dubbed the ‘Bionic Boot,' and Seymour is still working on a fully functioning boot that will allow individuals to move as far as the flightless birds. However, the prototype is impressive enough.

Seymour has already been hard at work for several years. And he has gone through a plethora of prototypes. Last month, he took his Bionic Boots to the Maker Faire in New York to give a demonstration (see the PopSci video below). According to the PopSci interview, Seymour says won’t rest until he can go faster than Earth’s fastest land animals.

Considering that the fastest known land animal, the cheetah, has a recorded speed of 96–120 km/h (60–75 mph) he may have some work left (note: the fastest land animal does not include the mite or the speed of diving birds).