A series of algorithms turned the famous pixelated face into an HD portrait. 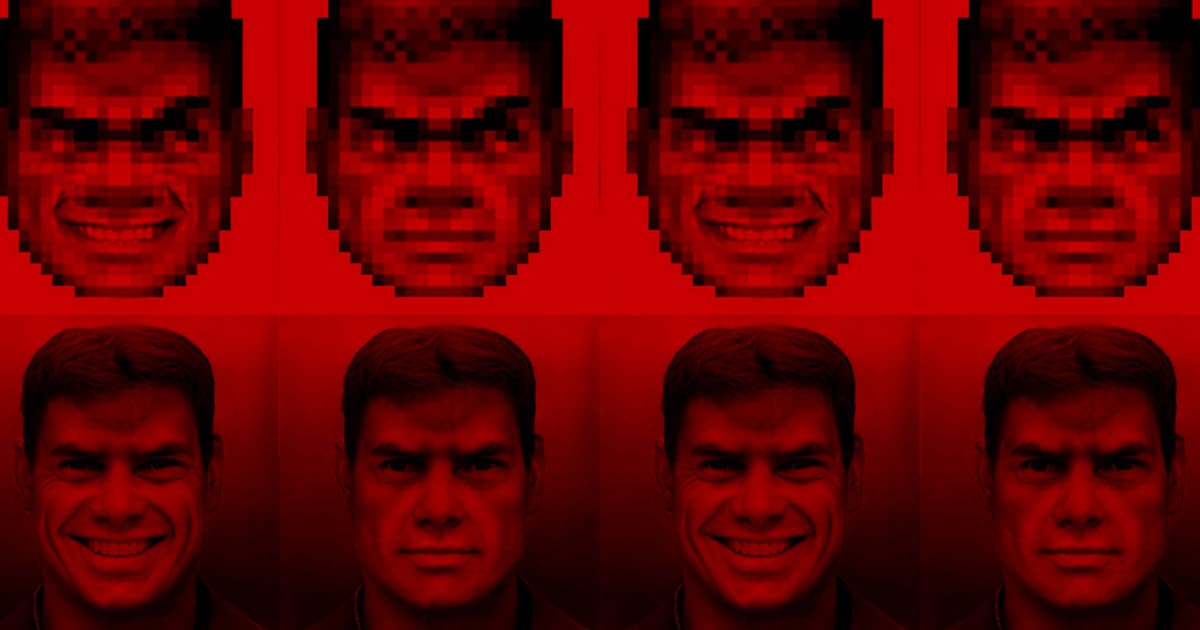 Finally, the HD remake we've all been waiting for: a series of neural nets took the classic pixelated mug of the space marine from seminal 1993 first-person shooter "Doom" and churned out an almost photorealistic portrait.

The face, which looks sort of like a beefier Nathan Fillion, was posted to Reddit on Sunday. And while the resulting thread reveals that the process wasn't as straightforward as it seems, the image is still a startling example at how adept artificial intelligence has become at filling in the gaps in a low-fidelity input — and spitting out something new and convincing.

The final image is actually the product of several AI systems taking the improving on one another. According to the Reddit thread, the original "Doom Guy" sprite was fed into the AI of photo-editing programs including FaceApp, Waifu2x, and GIMP. That resulted in an improved, but still very pixelated and maybe pinkeye-infected version of the face.

From there, the image was fed into StyleGAN, the Nvidia AI system that people have used to create photorealistic portraits and nightmarish Pokémon sprites. StyleGAN churned out a more realistic image then took another pass to smooth it out. But because the original sprite had unrealistic proportions, the new image was manually reshaped, into this final version.

Basically, one algorithm couldn't take the pixelated blob that is Doom Guy and turn it into a real-looking face — it took a few steps to get there.

But once that process is set up, AI can do some cool stuff — the original Reddit post, for instance, shows how editing teeth into the pixelated sprite convinces the AI to create a very different portrait, reshaping Doom Guy's entire expression into a big beaming smile.

More on StyleGAN: This Site Tests Whether You Can Spot AI-Generated Faces

Read This Next
Locker Room
Leaked Messages Show How CNET's Parent Company Really Sees AI-Generated Content
I Have a Dream of Mass Layoffs
ChatGPT Shamelessly Writes Letter Announcing Layoffs While Promoting Execs and Quoting MLK
Bot My Fault
News Site Admits AI Journalist Plagiarized and Made Stuff Up, Announces Plans to Continue Publishing Its Work Anyway
Botulism Toxin
CNET's AI Journalist Appears to Have Committed Extensive Plagiarism
Pause Patrol
CNET and Bankrate Say They're Pausing AI-Generated Articles Until Negative Headlines Stop
More on Artificial Intelligence
Grody Defenders
5:59 PM on the byte
The Deepfake Porn Scandal Is Tearing the Streaming Community Apart
Chinese Chatbots
4:41 PM on futurism
Chinese Company Gearing Up to Release Powerful ChatGPT Competitor
AI Buster
2:34 PM on futurism
We Tested OpenAI's New AI-Detector and Uhhhhh
READ MORE STORIES ABOUT / Artificial Intelligence
Keep up.
Subscribe to our daily newsletter to keep in touch with the subjects shaping our future.
+Social+Newsletter
TopicsAbout UsContact Us
Copyright ©, Camden Media Inc All Rights Reserved. See our User Agreement, Privacy Policy and Data Use Policy. The material on this site may not be reproduced, distributed, transmitted, cached or otherwise used, except with prior written permission of Futurism. Articles may contain affiliate links which enable us to share in the revenue of any purchases made.
Fonts by Typekit and Monotype.