Whistleblower: US Gov May Have Helped Spread Coronavirus

These are some serious allegations. 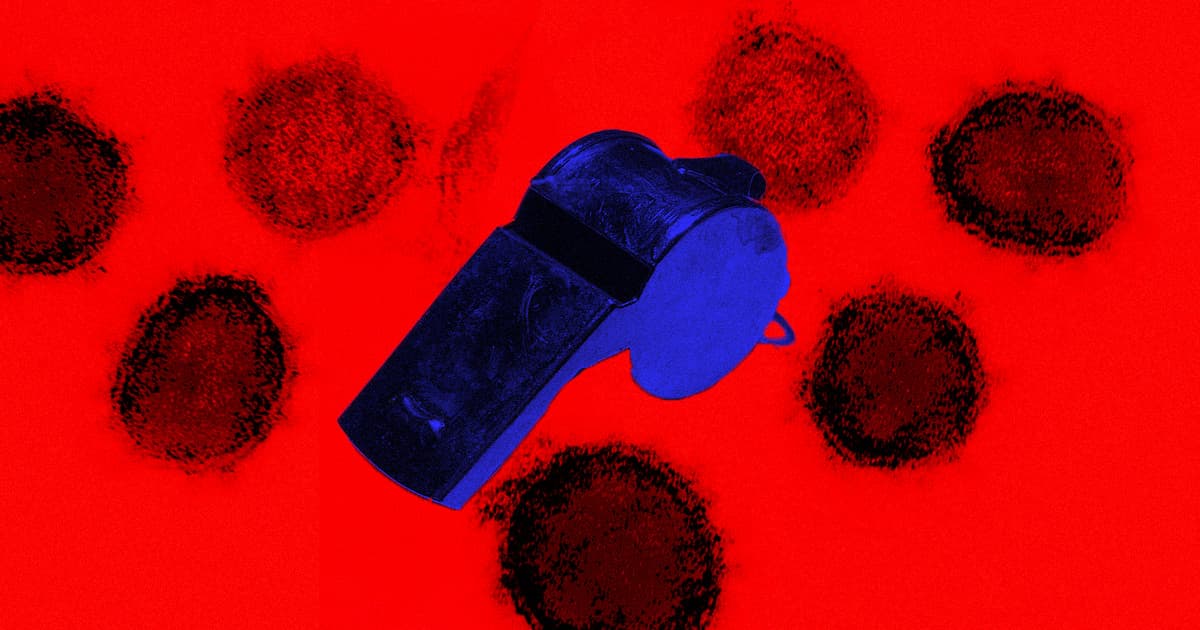 A whistleblower has come forward with some serious allegations, claiming that the US government may have inadvertently helped spread the deadly COVID-19 outbreak inside US borders by breaking protocol, according to an exclusive report by The Washington Post and a followup by The New York Times.

It’s an accusation that will likely cause problems for the White House, which is already struggling to find a consistent message about the ongoing outbreak.

The whistleblower alleges that she was “unfairly and improperly reassigned” after ringing alarm bells that more than a dozen healthcare workers — from the Administration for Children and Families (ACF) — were deployed by the Department of Health and Human Services (HHS) to quarantined areas in which COVID-19 patients coming from Wuhan, China, the epicenter of the outbreak, were being processed.

According to the whistleblower, the HHS workers didn’t receive adequate training and didn’t bring appropriate protective gear, potentially putting them in danger of becoming infected and infecting others.

The workers were in contact with evacuees in quarantined areas at Travis Air Force Base and March Air Reserve Base, according to the complaint. The whistleblower wrote that “appropriate steps were not taken to quarantine, monitor, or test [the workers] during their deployment and upon their return home,” as quoted by the Post.

One of the whistleblower’s lawyers, Lauren Naylor, told the Post that the ACF workers “were allowed to leave quarantined areas and return to their communities, where they may have spread the coronavirus to others.”

According to the Post, several people within HHS voiced objections over sending the unprepared ACF workers. The workers were also never tested for COVID-19, since they didn’t meet the criteria at the time.

The whistleblower claimed that concerns over the ACF workers’ health were dismissed by administration officials as detrimental to staff morale, and that concerned employees were “accused of not being team players,” as quoted by the Times.

Ominously, the whistleblower report comes shortly after the first “community transmission” of the deadly virus observed in the US was confirmed by the Centers for Disease Control and Prevention early this morning. In other words, this is the first infected person in the country who is not known to have traveled anywhere linked to an outbreak. That means they may have picked up the virus in the US instead of abroad.

That connects to the whistleblower story — albeit circumstantially — because the patient is from Solano County, the same county as Travis Air Force Base. CNN did note however that the patient “has no connection to [the base].”

To be clear, any ties between the whistleblower’s report and this particular infection have not been confirmed. But commentators as prominent as MSNBC host Chris Hayes are suggesting that the connection may be more than a coincidence.

Then those workers went out into the public with no monitoring or testing regime in place.

And now the first US-contracted case has appeared right near one of the airforce bases where this all happened.

HHS confirmed the existence of the report, but distanced itself from any wrongdoing.

“We take all whistle-blower complaints very seriously and are providing the complainant all appropriate protections under the Whistleblower Protection Act,” a spokeswoman told the Times. “We are evaluating the complaint and have nothing further to add at this time.”

“To your knowledge, were any of the ACF employees exposed to high-risk evacuees from China?” Gomez asked, as quoted by the Times.

Unless with the proper equipment and special suits, “they should never have been,” Azar replied. “To maintain quarantine, that should be the case.”

Online, the report was met with outrage.

so fairly likely it seems that the dipshit cronies staffing the Trump regime bungled their way into sparking a Covid-19 superflu cluster https://t.co/ZJD9aA9Wca

More on the virus: Report: Two-Thirds of Coronavirus Infections May Be Undetected

5.19.22 Rx/Medicines
Doctors Impressed by Drugs That Rejuvenate Immune System
4.07.22 Developments
It Is With Great Regret That We Inform You That We May Be Getting Slammed by Another COVID Wave
3.14.22 Developments
Haven’t We Suffered Enough? There’s a New COVID Outbreak in China
2.15.22 Genetics
Scientists Warn That Terrorists Could Release a Horrifying Virus
2.01.22 Developments
NYPD Cop Investigated for $1.5 Million Scheme to Sell Fake Vaccine Cards

5.20.22 Devices
Lawsuit Claims Apple AirPods Ruptured a Child’s Eardrums
A grim claim!
By Lonnie Lee Hood / Read More >>
5.19.22 Developments
Scientists Warn of International Monkeypox Outbreaks
"Monkeypox usually does not occur globally."
By Victor Tangermann / Read More >>
5.18.22
Pharma Bro Martin Shkreli Released From Prison, Seen Eating at Cracker Barrel
"Biggest piece of s*** on this Earth."
By Lonnie Lee Hood / Read More >>
Keep up.
Subscribe to our daily newsletter to keep in touch with the subjects shaping our future.
+Social+Newsletter
TopicsAbout UsContact Us
Copyright ©, Camden Media Inc All Rights Reserved. See our User Agreement, Privacy Policy and Data Use Policy. The material on this site may not be reproduced, distributed, transmitted, cached or otherwise used, except with prior written permission of Futurism. Fonts by Typekit and Monotype.