Startups Are Rushing to Prescribe a New Weight Loss Drug, But Questions Remain

Is this drug a game changer? The answer is complicated. 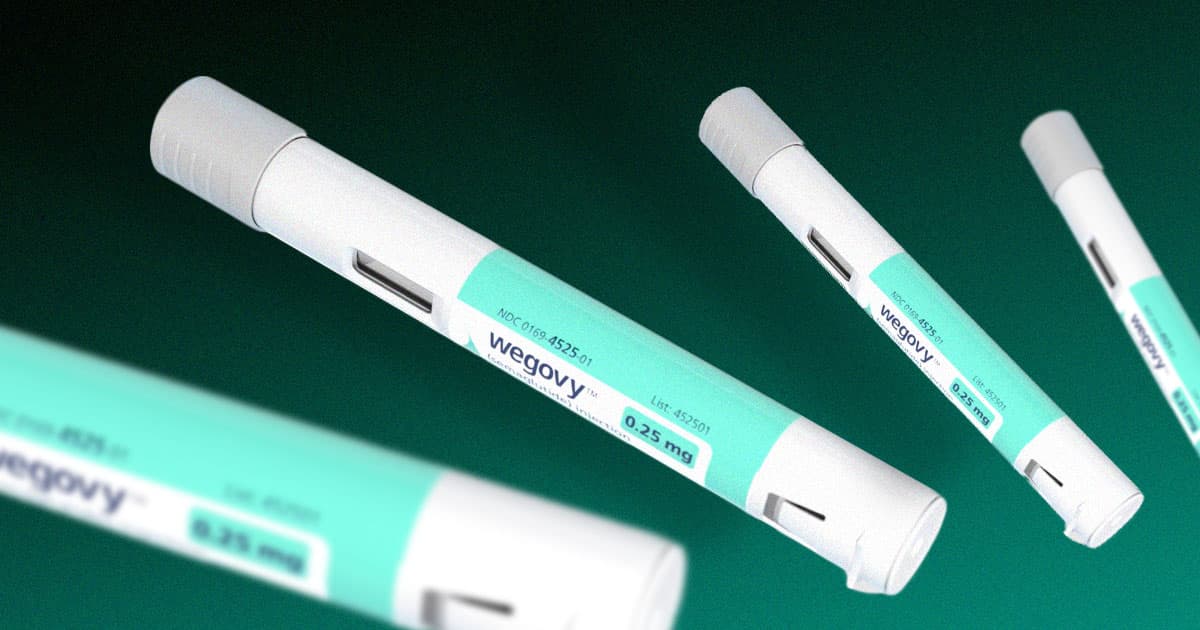 For Zoe, it started with a news article. The Food and Drug Administration (FDA) had approved a new weight loss drug, developed by Novo Nordisk, called Wegovy. Intrigued, she joined a Facebook support group for people trying out the drug.

“I was pretty desperate to get it at that point,” she told us, “especially because I was seeing so many other people’s results and got major FOMO.”

Wegovy is a new tradename for semaglutide, a drug that’s been approved to treat Type II diabetes since 2017, but which also won FDA approval as a weight loss medication in June of this year. Its results are striking — one in three participants who took it during a clinical trial, combined with changes in diet and physical activity, lost a fifth of their body weight, as well as improving biomarkers for heart disease.

Despite its very recent approval, startups are already lining up to prescribe it.

Take Calibrate, a telehealth startup that describes the new drug as “both effective and safe” at bringing about “health benefits and weight loss” when combined with changes in diet and physical activity.

Or look at Fella, another startup that’s tackling stress eating in men, with a combination of lifestyle coaching and pharmaceutical weight management.

Both were cagey about discussing the drug, though. Calibrate declined to comment at all, and Fella answered general questions about its approach, turning down the opportunity to answer more specific questions about Wegovy and its overall view of the weight management landscape.

Other once-promising weight loss drugs have crashed and burned, like Fen-Phen, which was linked to severe cardiovascular events, or the appetite-modulator Belviq, which was recalled in 2020 due to cancer risks. Most people who go on a diet will not lose weight for the long-term, often experiencing a rebound afterward. Despite all that, weight loss remains a multibillion dollar industry with a powerful draw.

“I think I would still start Wegovy even if all blood tests initially came back normal,” Zoe said. “Even though the main reason I started Wegovy is because I want to be healthy, I also don’t want to be obese forever.”

While obesity is often treated as an individual problem, it’s tightly tied to systemic health disparities. Effective weight management drugs are unlikely to “solve” obesity either. After all, our bodies evolved in a different environment where food was more scarce, tying the issue to environmental factors, especially when it disproportionately affects racialized minorities and those with low socioeconomic status.

Timothy Gill, a professor of public health nutrition at the University of Sydney, expressed ambivalence about semaglutide. Although the drug is promising, he believes that in large part, obesity and weight management needs to be addressed at a society-wide level. While changes in diet, physical activity or supplementation are rarely sufficient for weight loss, he believes tackling the issue at a community level could be beneficial.

“From a public health perspective, I do worry a little bit that when we get these breakthroughs like this, it becomes seen as we've suddenly got the solution to a physiological defect that people with obesity have,” he added. “And it's not a defect at all, it's just that some people are actually much more effective at survival at the physiology that evolution gave us.”

“Throw up your hands, we're not even going to bother; that has been a reaction that has allowed successive governments around the world just to ignore this problem as a health concern,” Gill said.

But Gill recognized the value of semaglutide, which works differently from the disastrous weight loss drugs of the past. It mimics a satiety hormone, GLP-1, which researchers believes helps people feel full sooner. Despite some side effects like nausea or diarrhea, everyone who we spoke to felt it was worth it for their health.

One person who participated in the clinical trial told us that initially they’d experienced acid reflux after eating, but that it went away after reducing their food intake. Many other people taking the drug while changing their lifestyle also told us that they felt full sooner.

Another representative user was Rich, who was starting his fifth month on Wegovy and told us that he had lost five pounds so far, and that the side effects were “minimal to nonexistent.”

The approval of semaglutide as a weight loss drug intersects in complex ways with the rise of telemedicine. On the one hand, it’s worrisome to think about a doctor prescribing a new medication without even meeting a patient face-to-face. On the other, though, both Fella and Calibrate take the extra step of incorporating blood testing for metabolic health markers rather than prescribing solely based on BMI — a problematic metric on its own.

“A lot of people are very much against BMI, but it's like measuring blood pressure or cholesterol,” Gill said. “None of these things actually totally predict your health.”

Gill added that “it should never be BMI alone that defines what treatment you get.”

Still, while Wegovy does appear to be effective at helping many people lose weight, it doesn’t address the root socioeconomic issues that cause obesity in the first place. Many people don’t have access to supermarkets with affordable, healthy foods — or may not have time to prepare them in between their work shifts, nevermind the money to afford them at all.

He also pointed out that while the drug proved effective in clinical trials, that’s no guarantee that its effects will generalize more broadly.

“Going into a pharmaceutical trial means that you're in a very controlled environment, you've got a lot of support,” he said.

Much of the tension comes down to the fact that Wegovy is a new drug, meaning that nobody has been observed taking it for more than a few years. Maybe it’ll turn out to be an effective long term treatment that’s correlated with positive health outcomes. Maybe it’ll be an effective way to shed pounds, but the health effects will ultimately be underwhelming. And maybe its effectiveness will decline over time — or it’ll turn out to be correlated with grave health risks.

Without long term research, there’s no way to know. And if the drug does turn out to be a success, the greatest challenge may turn out to be the health insurance system.

Without insurance, the drug cost almost $1600 per month, but Zoe managed to get a savings card to get a discounted price. Still, she says, getting insurance to cover the cost wasn’t easy. For many people that may need the drug, it is not clear whether they will be covered by insurance. A similar drug, Saxenda, is only covered by 40 percent of private insurers.

“I spent hours on the phone with NovoCare and Walgreens and there were moments where I felt very hopeless,” she said.

Compounding that issue is the price of the medication, which makes it unavailable to many of the people who may benefit from it. While Zoe is currently using a savings card for her prescription, she has “very little confidence” that her insurance will cover it in six months’ time.

According to Novo Nordisk, “the savings offer was intended for healthcare providers to extend to those patients with insurance coverage for anti-obesity medicines who were awaiting Wegovy to potentially be added to their prescription plan.”

“Affordability and access are really important in this space and I think you know we are working hard really to try to secure reimbursement for our drug and into obesity medications in general,” said Jason Brett, director of obesity medical affairs at Novo Nordisk.

Many Wegovy users are also experiencing delays in obtaining the medication itself, which Zoe said is causing shortages of specific doses.

“A lot of doctors are encouraging patients to skip dosages,” she said. “For example, the 0.25 mg dose was on backorder, so doctors just prescribed 0.5 instead. Well, then that caused those of us who were already on 0.25 to have a harder time finding the 0.5 mg dose.”

It’s also unclear how many people obtaining the drug through telehealth startups will receive insurance coverage for it. Nonetheless, Fella promises to help its subscribers navigate health insurance. Both Fella and Calibrate offer customers a full refund if they are unable to receive adequate insurance compensation. Fella’s program charges $149 per month for coaching and support, while Calibrate charges $135 per month.

Even if Wegovy works as intended, it isn’t going to fix racial and socioeconomic disparities in nutrition and metabolic health. It won’t prevent weight stigma or medical biases. And it certainly won’t ensure that important medications are actually covered by insurance. But at least on an individual scale, Wegovy may well help some people — and that would be an accomplishment on its own.

Zoe and many other people on Wegovy, for their part, intend to take it long-term.

“The main concern is our insurance not covering it, having to stop treatment, and [gaining] back all the weight,” she said.

Simon Spichak completed an MSc in neuroscience and now works as a freelance journalist in Toronto. He's also working on a telehealth mental health startup called Resolvve, aimed at providing students in Canada with more access to psychotherapy.

1.25.23 Treatments
A Hot New Weight Loss Drug Is Rapidly Aging Users' Faces
6.18.22 Studies
Scientists Say They're Honing in on a Pill You Can Take Instead of Exercising
9.14.21 Studies
Study: Weight Gain Caused by Eating Specific Foods, Not Eating Too Much
7.06.21 Rx/Medicines
Doctors Are Really Psyched About This New Weight Loss Drug
3.24.21 Treatments
Ultrasound Blasts Made Overfed Mice Lose Weight, and Scientists Say it Might Prevent Diabetes

1.26.23 Developments
Eccentric Wealthy Guy Spends $2 Million Per Year Staving Off Aging
"No one is pushing the envelope as much as Bryan."
By Maggie Harrison / Read More >>
1.26.23 Robotics/Prosthetics
FDA Gives Go-Ahead for Robotic Exoskeleton For Stroke Survivors
"It's new for me, because previously I've always needed assistance to walk, and now, I no longer need assistance, so I feel independent."
By Frank Landymore / Read More >>
1.24.23 Neuroscience/Brain Science
Scientists Say New Brain-Computer Interface Lets Users Transmit 62 Words Per Minute
A huge bandwidth increase.
By Victor Tangermann / Read More >>
Keep up.
Subscribe to our daily newsletter to keep in touch with the subjects shaping our future.
+Social+Newsletter
TopicsAbout UsContact Us
Copyright ©, Camden Media Inc All Rights Reserved. See our User Agreement, Privacy Policy and Data Use Policy. The material on this site may not be reproduced, distributed, transmitted, cached or otherwise used, except with prior written permission of Futurism. Articles may contain affiliate links which enable us to share in the revenue of any purchases made.
Fonts by Typekit and Monotype.