This little piggy did not go to the market. 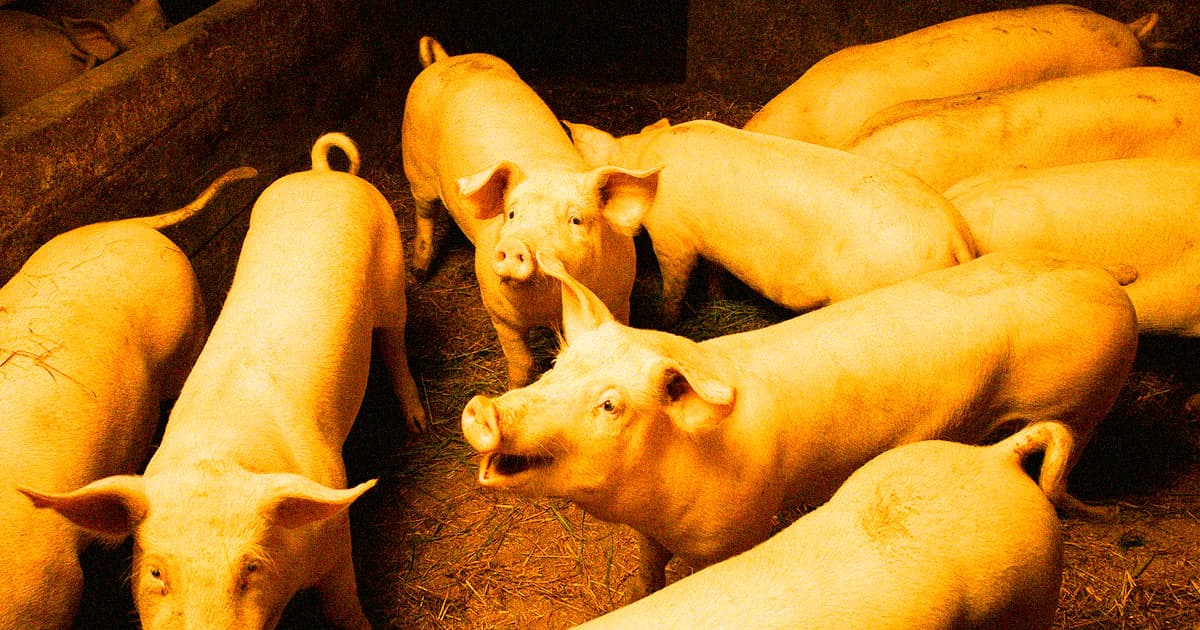 Poor pigs. Not only do we enjoy them as a tasty meal, we subject them to all sorts of bizarre and ungodly experiments.

This might be the weirdest, most impressive one yet, though: a team of researchers were able to "partially revive" the organs of pigs that had been dead for a full hour, according to an accompanying press release, a potentially groundbreaking experiment that raises a number of thorny ethical questions.

Published in the reputable journal Nature on Wednesday, the study is a continuation of an earlier 2019 experiment, in which researchers managed to restore brain activity in long-expired pigs using a system the researchers dubbed "BrainEx."

This time around, the same team built on those findings to develop a new system called "OrganEx," in an attempt to sustain the organs of deceased pigs.

Using OrganEx, the team pumped a blood substitute into the pig corpses. This pseudo-blood contained anti-coagulants and other compounds which helped stave off decomposition and cell death. As a result, the researchers were able to jump-start the pig organs.

While that may sound pretty grisly, the implications could be huge. The researchers hope that their new findings will help make more potential donor organs available for transplants — which is more relevant than ever, given the ongoing organ shortage.

"The technology has a great deal of promise for our ability to preserve organs after they're removed from a donor," said study co-author and Yale bioethicist Stephen Latham, at a news briefing, as quoted by CNN.

By hooking up an organ from a deceased donor to the OrganEx system, medical personnel could preserve the organ for longer periods of time than what’s currently possible, Latham added.

If proven successful in humans, OrganEX could be an incredible, lifesaving innovation. And while we still don't know how long the system can extend the shelf life of organs for, experts are thrilled.

"The press release is accurate but if anything underestimates the significance of these discoveries," said Sam Parnia, director of critical care and resuscitation research at NYU Grossman School of Medicine, who was not involved in the study, in a statement.

OrganEx could be used to save the lives of "whom the underlying cause of death remains treatable," Parnia added.

"Today, this would include athletes who die suddenly from a heart defect, people who die from drowning, heart attacks or massive bleeding after trauma," Parnia said. "The OrganEx system can preserve such people’s organs and prevent brain damage for hours in people after death."

Those kinds of implications are staggering, but naturally, they raise a whole score of ethical questions, like whether it's morally right to use the technology to revive someone who succumbed to such traumatic injuries in the first place.

"The question is, if the outcomes are going to be really poor, should you subject them to this?" Mount Sinai Health System emergency medicine physician Avir Mitra, told to Wired. Mitra was also not involved in the study. "In emergency medicine, we often say that there are fates worse than death. Just because we can bring someone back, doesn't necessarily mean that we should."

Then there's the controversy surrounding our definition of "death."

Responding to the study’s findings in an essay published in Nature, Brendan Parent, a transplant ethics and policy researcher also at NYU Grossman, wrote that "the latest findings raise a slew of questions — not least, whether medical and biological determinations of death will need revising."

Parnia was a lot more blunt in his thinking. "This study demonstrates that our social convention regarding death, ie. as an absolute black and white end is not scientifically valid," he said in the statement.

Indeed, scientists and even lawyers have long struggled to define what being "dead" actually means. Does death occur when the brain stops functioning, and we lose consciousness — or when the heart stops pumping blood?

Now, OrganEx is yet another complicating factor in that morbid equation.

Shockingly, some of the OrganEx pigs — which were put down via heavy sedation and induced cardiac arrest — moved during testing, and the researchers still aren't entirely sure why. But they're adamant the technology doesn’t induce the kind of coherent brain activity conducive to consciousness.

"We can say that animals were not conscious during these moments," said senior author and Yale neuroscientist Nenad Sestan at the briefing, as reported in The Daily Beast. "We don't have enough information to speculate why they moved — it does implicate preservation of some motor functions."

The almost Frankenstein methods used to test OrganEx will not sit well with some onlookers — but at the very least, there's plenty to be said about the lifesaving implications of the technology.

12.02.22 Studies
So Many People Die at Motorcycle Rallies That Organ Donations Spike
9.13.22 Developments
Famed Director Dies by Assisted Suicide
9.08.22 Developments
Nobody Is Sure What Queen Elizabeth II Died From
8.17.22 Studies
Doctors Say They've Figured Out How to Switch an Organ's Blood Type
7.10.22 Studies
Salting Your Food Can Kill You Faster, Doctors Say