This could change the lives of many living in areas where HIV is stigmatized.
by Chelsea Gohd / July 28 2017

A two year trial has shown that monthly antiretroviral therapy (ART) injections are as effective at keeping HIV under control — defined as having less than 50 copies of the virus per millilitre of blood — as a daily pill. Of the 286 people who took part in the trial, 269 (94 percent) achieved the desired effect, in contrast to 84 percent of people who used daily pills. 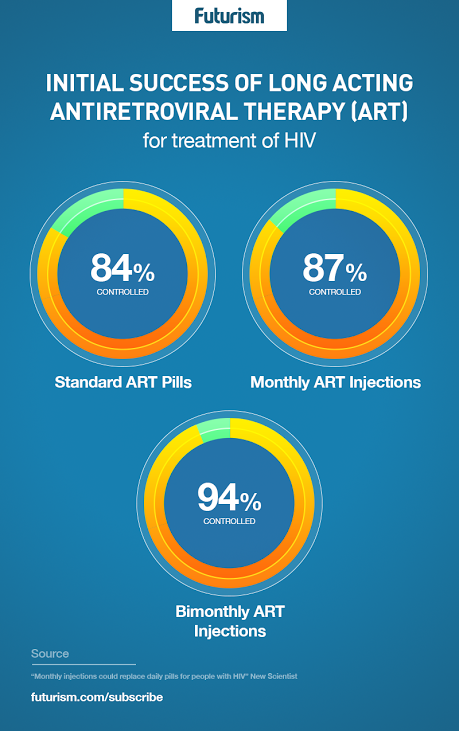 The treatment is a combination of cabotegravir and rilpivirine, which are both antiretroviral drugs — they do not kill or cure the virus but block its growth. After being injected into the buttock, they collect in between muscle fibers where they slowly flow out over the course of a number of weeks. Peter Williams, who helped to lead the project and is part of the pharmaceutical firm Janssen, told New Scientist that “a single dose can last for 48 weeks or more.”

This news was revealed at a conference for the International Aids Society in Paris by Joseph Eron, Director of the Clinical Core at the UNC Center for AIDS Research.

HIV effects 1.1 million people in the US alone, and so any developments in treatment help a huge amount of people. Mahesh Mahalingam, of the United Nations Programme on HIV/AIDS, explained to the New Scientist that “it will help remove the challenge of taking tablets every day and significantly improve the quality of life of people living with HIV.”

Recently, scientists have used cows to determine how the virus invades the human immune system by encouraging the release of broadly neutralizing antibodies; the key to defeating HIV. Additionally, at the same conference that the injection was announced,  Anthony Fauci, part of the US National Institute of Allergy and Infectious Diseases, asserted that a nine-year-old South African child was “virtually cured” of the disease due to treatment he had soon after being born.

In particular, due to it being a monthly injection vs a daily treatment, this therapy will help people who live in areas where there is a taboo against HIV. Instead of having to have seemingly constant refills and treatments, it can be a monthly affair that is more easily managed, especially in difficult circumstances.

This development is one of many avenues of exciting new research concerning HIV, some of which could contain the seed that one day grows into a full-blown cure.