Why You Might Want an mRNA Booster Shot, In One Simple Graphic

Booster shots may be coming to the US soon, for better or worse. 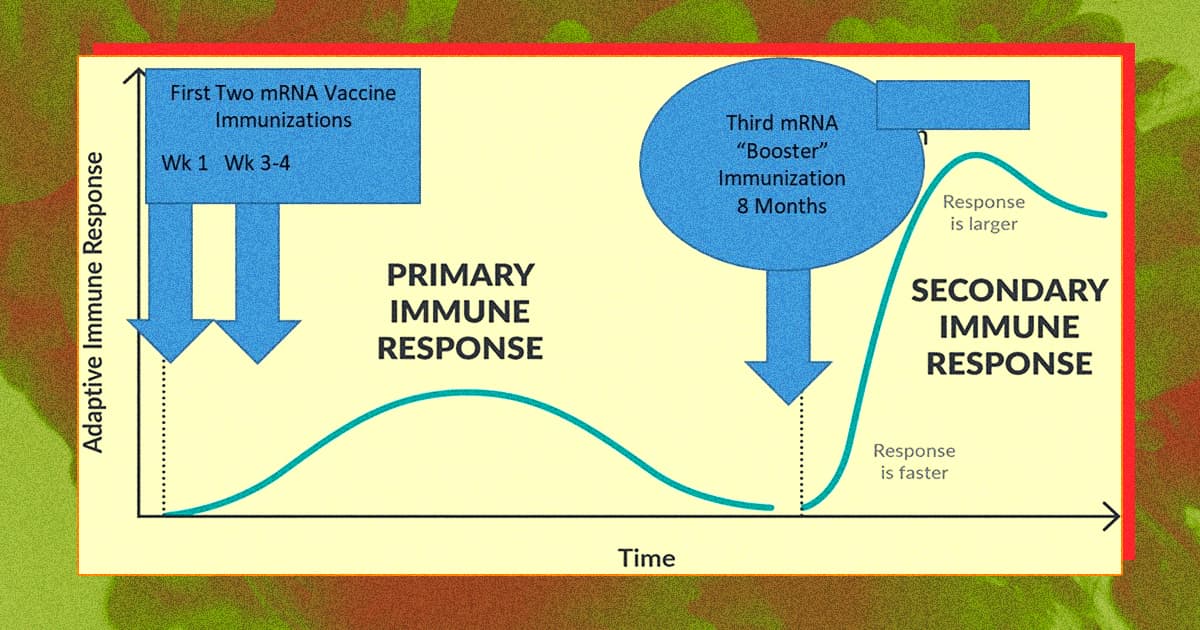 By late September, Americans who got an mRNA vaccine for COVID-19 — that means either Pfizer or Moderna — may be able to sign up for a third shot in order to boost their immune response to the coronavirus, according to an announcement from President Biden.

Part of the rationale is preemptive, The Washington Post reports: There's preliminary evidence that a third shot will prevent vaccinated folks' immunity to the coronavirus from waning, help fend off the delta variant and any that come after it, and boost protection against less severe cases of COVID-19. In order to understand what a third vaccine could do for your immune system, check out this rudimentary graphic from Baylor College of Medicine pediatrician and molecular virology expert Peter Hotez.

In case it's helpful or illustrative, I modified a graph to explain the rationale for the third "booster" mRNA immunization pic.twitter.com/rk4InUnt4D

Some caveats: This isn't the most scientific graph in the world. As Hotez explains deeper in the Twitter thread, the axes are meant to show a generalized pattern of how the immune response changes over time. So don't worry about the fact that this graph shows your immune response to COVID-19 falling down to near-bupkis about eight months after your second jab — that's absolutely not what happens in reality.

Also should be pointed out that the graph is a very rough approximation. Adaptive immunity does not go down to zero with the first 2 mRNA immunizations, still robust immune responses, but this shows the potential benefits of a 3rd immunization

Of course, the biggest caveat is that scientists aren't entirely convinced that booster shots are necessary. Experts warn that the data that suggests booster shots will soon be necessary is preliminary, incomplete, or otherwise inconclusive, Nature News reported earlier this month.

Given those hesitations, it perhaps makes more sense to get the first round of vaccines out to more people before Americans get to triple up. A huge portion of the world's population and even the US population is still unvaccinated. In many, especially poorer countries, that's because shots aren't even available — a stark difference from the US's anti-vaxxer and vaccine hesitancy problems.

That hasn't stopped Israel from offering booster shots though — a move that was criticized as being selfish by the World Health Organization given how many people around the world still need their first doses. It's interesting, to say the least, to see the US follow suit.

But, just like the first round of vaccines, which you should get if you haven't already, there's no glory to be attained from refusing a shot when it's your turn — letting the vaccines at your local pharmacy expire won't suddenly fix global healthcare inequality, but it could endanger yourself, and those around you.