We can't tell if we should be impressed or not. 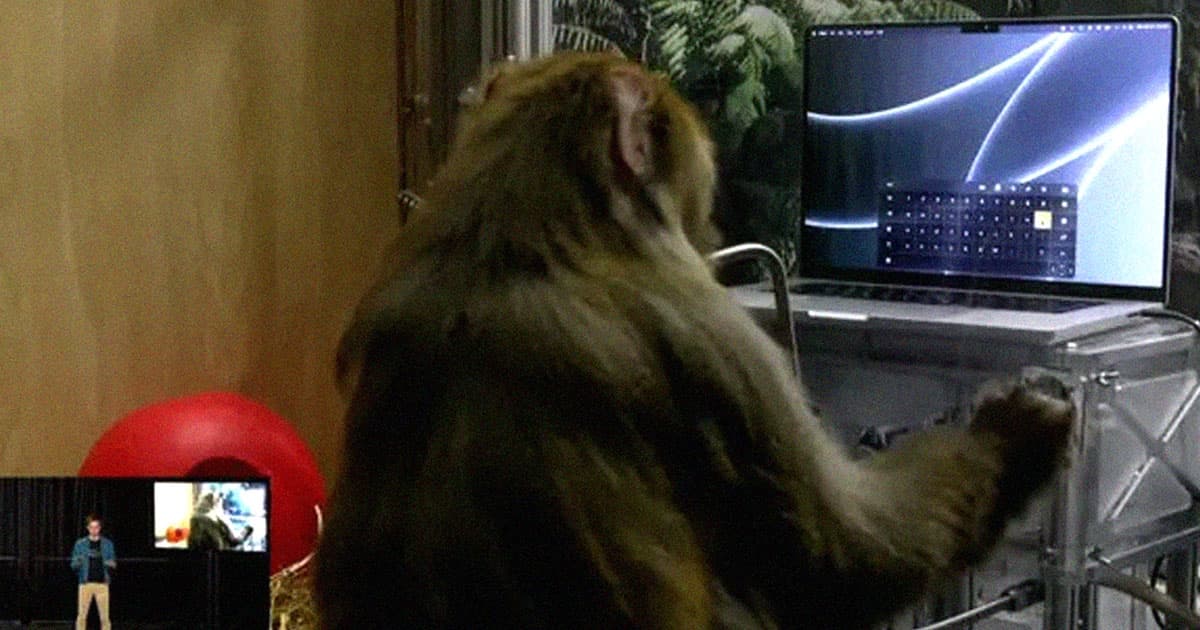 During a demo on Thursday evening, Tesla and SpaceX CEO Elon Musk showed off what his brain computer interface (BCI) startup Neuralink has been working on.

The company showed footage of a monkey that he said was able to "type" on an on-screen keyboard by using a coin-sized chip embedded in its brain, in an apparent riff about the old adage about monkeys and typewriters.

No, the monkey wasn't able to decipher the meaning of the letters typed — it was simply moving the cursor to click on previously highlighted letters for a reward in the form of a fruit smoothie.

"It’s like replacing a piece of your skull with a smartwatch, for lack of a better analogy," Musk said at the event, vowing to get one of the gadgets implanted in his own brain.

While it may have looked like an impressive leap forward for the company, this kind of technology has been around for decades. For instance, dozens of patients have already had a "Utah array" device implanted in their brains, allowing them to control robotic arms or type letters.

What Neuralink has able to bring to the table, experts say, is a slicker wireless interface, making it potentially less clunky than existing tech. Utah arrays are bulky, protrude out of the skull, and require users to be physically hooked up to the computer.

During the presentation, Neuralink also showed off a massive robot it intends to use to implant its chip, dubbed N1, into a hole in the skull, where it can interface with the brain.

Musk also bragged that humans could be implanted with the device within six months. He always has extremely ambitious timelines in mind, though, with an extremely dubious track record. Ultimately, permission to test the tech on humans can only be granted in the United States by the Food and Drug Administration.

Musk also made other extremely lofty promises about Neuralink at the event, claiming the device will be able to give sight to those who have never been able to see before and allow people with paralysis to walk again.

Those claims build on previous promises he's made that the device could one day "solve" autism and schizophrenia, and even stream music directly to the brain.

"Our goal will be to turn the lights on for someone who's spent decades living in the dark," said Neuralink researcher Dan Adams during the event.

Experts watching the show were left with mixed emotions.

"These are incremental advances," University of Pennsylvania neurosurgeon and BCI researcher Daniel Yoshor told The New York Times. "The hardware is impressive but does not represent a dramatic advance in restoring or enhancing brain function."

Yoshor balked at Musk's claims of such a device gifting blind people the ability to see.

"I would be highly unsure of this kind of device in a patient with congenital blindness," he told the newspaper.

The company upgraded its first-generation chip, which featured 1,024 electrodes, to a next-generation model that features 16,000 electrodes. That kind of increase could allow somebody to see with a considerable amount of fidelity, according to Neuralink.

"If you put a device on both sides of your visual cortex, that would give you 32,000 points of light to make an image in someone who's blind," Adams said.

Other than restoring sight, Musk said at the event that the device could allow "someone who has basically no other interface to the outside world" to "be able to control their phone better than someone who has working hands."

But Neuralink has plenty of homework to do before it can realize such a vision.

Musk also admitted that scaling up production of such a chip could prove to be "insanely difficult."

And the company will face a steep uphill battle in getting its first brain chip implanted in a human, following other experiments involving sheep and pigs as well as monkeys. Regulators still have to evaluate the potential harm such a device could do to the human brain.

Then there's the question of how long such a device could last inside the skull without breaking down or corroding, something that has already proven difficult for other BCI devices, as the NYT reports.

And that's not to mention whether anybody should trust Musk's infamous "move fast and break things" approach to engineering when it comes to allowing a robot to insert a microchip inside their skull.