Audio Surfaces of Dr. Oz Saying Some Incest Is Okay, and Also His Daughters Don't Like How He Smells

"If you're more than a first cousin away, it's not a big problem." 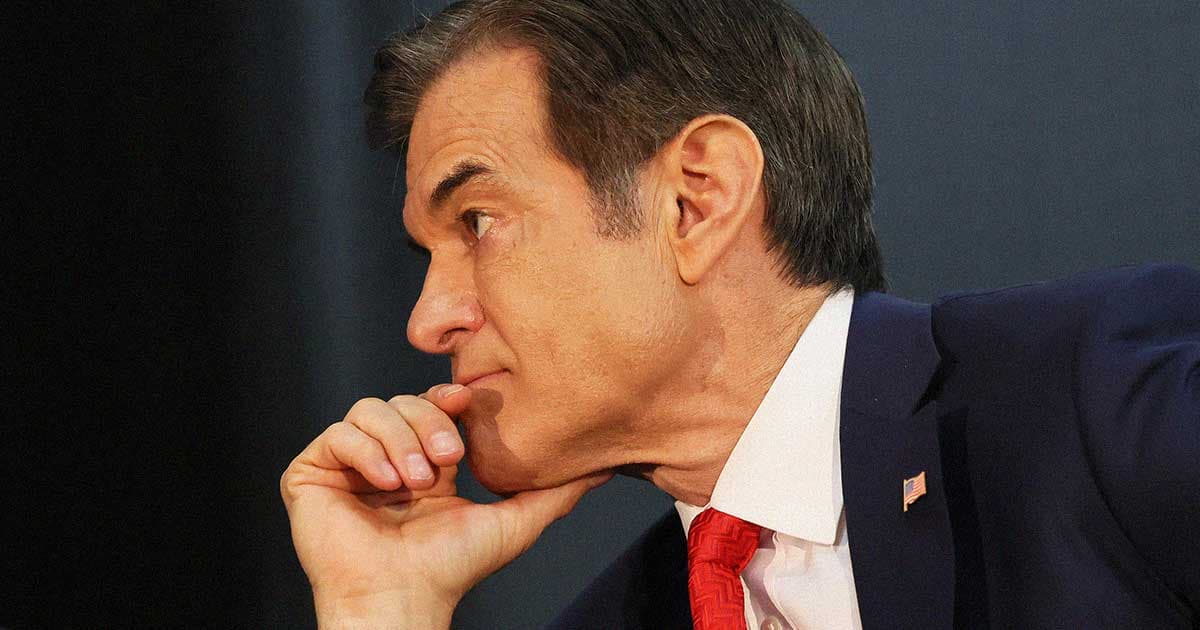 In a resurfaced audio clip, television personality and Pennsylvania senate candidate Dr. Mehmet Oz says that some incest is fine, actually — oh, and also, his daughters hate his pheromones. Yes, our heads are reeling too.

As Jezebel reports, the cursed soundbite is from a 2014 interview on the radio show The Breakfast Club. One of the hosts, Angela Yee, crowd-sourced questions to ask the Oprah-annointed TV doctor live, and boy, was one of them a doozy.

"I'm going to ask you this and you tell me if this is safe for this person, okay?" Yee cued Oz. "Well, he said, 'Yee, I can't stop smashing my cousin.'"

"'We hooked up at a young age and now in our 20s, she still wants it. No matter how much I want to stop, I always give it to her. Help me,'" Yee continued. "What advice would you give that person?"

Importantly, it doesn't really feel like this person is asking for strictly biological advice. They're asking for emotional support. Really, this specific question is an ethical one, not a medical one. It didn't feel as though they were asking if what they were doing was okay on reproductive or genetic grounds so much as social and familial ones.

But Oz, tactful as ever, responded with advice that seemed to miss all that nuance.

"If you're more than a first cousin away," Oz responded, "it's not a big problem."

"Every family has genetic strengths and weaknesses," he explained further. "And so the reason we naturally crave people who are not so like us is because you just mix the gene pool up a little bit so that if I had one gene for, let's say, hemophilia, which is a classic example where you bleed a lot if you cut yourself, I don't want to marry a cousin who has the same hemophilia gene, because the chance of our child having both those genes is much higher."

Now, Oz isn't technically wrong. While immediate-family incest is taboo in most cultures, many still widely accept second-cousin marriages. First-cousin marriage is actually still legal in a lot of places, too, though the biological risk to any future children is appreciable.

But Oprah's Biggest Mistake completely failed to address the psychological and sociological core of the question — which is interesting, as he's certainly weighed in with emotional and mental health advice in the past. Instead, he gave his "it's whatever" response, and then, for some reason, decided to riff with some even more dubious thoughts about incest.

"You know, that's why children, girls don't like their fathers' smell. Their pheromones will actually repel their daughters because they're not supposed to be together," he pontificated. "My daughters hate my smell."

"Women will crave men, usually," he added, "who smell differently from their families."

We wish this all wasn't relevant, but it is. Incest, unfortunately, has come up a lot lately — not in the context of whether it's verboten to "smash" one's cousin, but as a factor regarding exceptions for abortion bans. (Oz recently flip-flopped on his past support of Roe v. Wade, calling abortion at any stage of pregnancy "murder," but claims to support abortion exceptions in cases of rape, incest, and the health of the mother.)

Oz's remarks also call to mind his fraught history of promoting false, misleading, or otherwise empty or damaging medical advice to his untold millions of devotees — one 2014 study, published in The British Medical Journal the same year that the Breakfast Club interview aired, even showed that about half of all advice given on Oz's show was either not supported or completely contradicted by medical research. More recently, he's taken to spreading COVID misinformation; he's recommended that citizens take hydroxychloroquine to combat the illness, and even called soon-to-be-former CDC director Anthony Fauci a "petty tyrant" on his campaign trail.

Once again: please, please don't listen to Dr. Oz's advice. A lot of real doctors have signed letters pleading for the public to dump him, even long before he was running for office. Even Oprah says she messed up.

And his daughters, apparently, say he smells bad. But that could just be the pheromones.