University of Nottingham researchers created an AI system that scanned routine medical data to predict which patients would have strokes or heart attacks within 10 years. The AI system beat the standard method of prediction, correctly making calls in 355 more cases than traditional means. Predicting cardiovascular events like strokes and heart attacks is a notoriously challenging task. In fact, the researchers note in their recent paper that around half of all strokes and heart attacks occur in patients who were never identified as being “at risk.”

The records included a decade of health outcomes, lab data, drug information, hospital records, and demographic information. The team identified the distinguishing characteristics of patients who experienced strokes and heart attacks using 75 percent of the records. They then tested their models against the standard guidelines using the remaining 25 percent of the records. The standard guidelines scored 0.728 out of 1.0, with the latter signifying 100 percent accuracy. The machine models scored between 0.745 to 0.764, with the neural network making 355 more accurate predictions than the standard guidelines, therefore earning the best score. Had those predictions been made in real time, the patients could have been provided with preventative care. 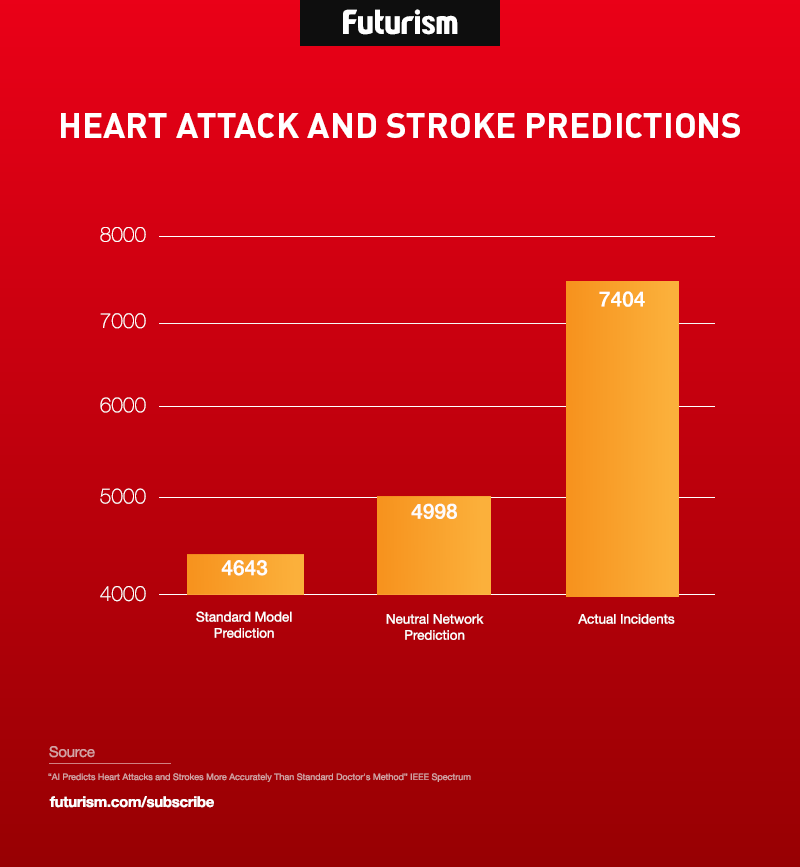 According to lead researcher researcher Stephen Weng, within five years the AI medical tools they are testing in labs will be improving the accuracy of clinicians’ diagnoses and the prognoses of patients. In practice, Weng envisions busy doctors making the most of their time with AI tools that are essentially masters of pattern recognition. “[T]he algorithm can look through the entire patient list, flag this up, and bring this to the attention of the doctor,” he said to IEEE Spectrum. “This could be done with the patient sitting in front of them during a routine appointment, or in a systematic screen of the entire list.” Although there is already clinical decision support software available, none of it uses AI pattern recognition — which is at the crux of these more accurate results.

Major regulatory hurdles remain before you’ll be seeing Dr. AI, however: “The key barrier to implementation will be managing privacy and patient confidentiality issues, with computer algorithms trawling through vast amounts of patient data which contain confidential and sensitive medical information,” Weng told IEEE Spectrum. Wariness of decision-making capabilities in medical machines on the part of regulators will also be a hurdle for AI technology to clear. For all of these reasons, when, exactly, the tech will be put into practice remains uncertain.