This Scientist Predicted He Would Live to 150. Now He's Not So Sure. 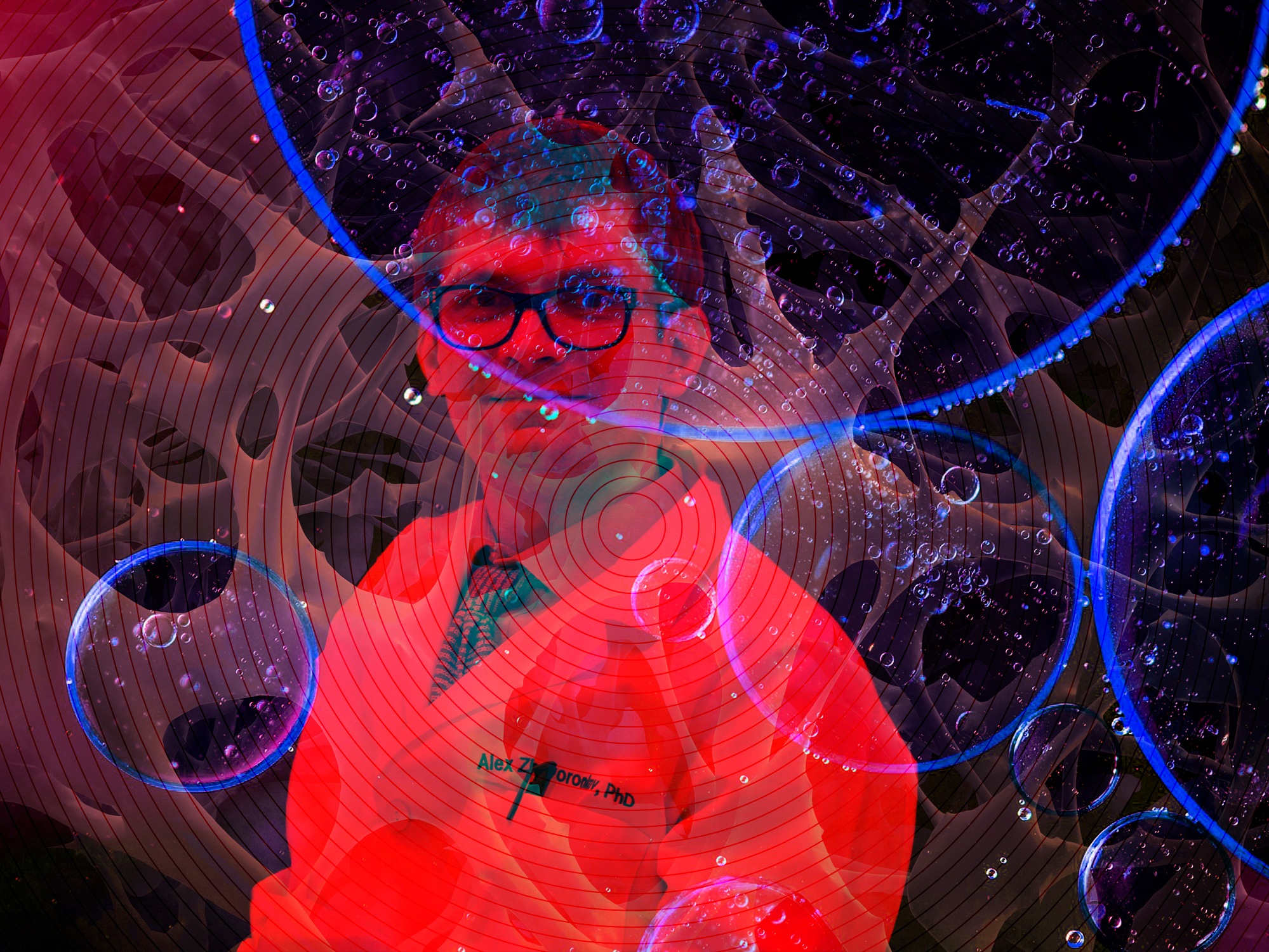 Alex Zhavoronkov was still young when he became obsessed with pushing the boundaries of the human lifespan. In his almost 20-year career, he's worked as a computer scientist and biotechnology researcher. Now 38, Zhavoronkov is working with artificial intelligence and big data at Insilico, a biotech startup where he's the CEO. And he firmly believes that aging research is the most important field of science right now.

In the past, Zhavoronkov claimed that he expected to live to be 150, but now he's more conservative. He's skeptical that we will see such drastic changes to the human lifespan quite so soon. There are too many hurdles left to clear, and he feels that today’s political and economic climate isn’t exactly conducive to expensive, experimental longevity research. To be clear, he does believe humanity will someday live that long, but not as soon as he thought

Someday, Zhavoronkov argues, we will build a future where humans can all live longer and healthier, enjoying productive lives well past the ages we never thought we’d reach at all. To get there, the powers that be will just need to shift their focus and decide that longevity is worth pursuing. And his company, along with others that are looking into big data, will forge ahead until that happens.

It's hard to argue that scientists shouldn't find ways to help people live longer. Zhavoronkov argues that longevity ought to be a fundamental human right — the right to live as long and well as possible. Democratizing longevity technology across society would mean reducing or ending many of the diseases and conditions facing people today.

Living longer and healthier would help people enjoy a better quality of life, but it would also prevent or solve many of the problems facing our economy: we have an aging population, a job market that leaves many underemployed and underpaid, and an overburdened healthcare system. Presumably, living longer will fix the economy because people will grow old without growing frail — our eternal descendants will spend less time at the nursing home and more time at the office.

The economic argument is a compelling one for the people holding the purse strings for the grants that fund research, but so far it hasn't been enough for them to funnel money into the field, where Zhavoronkov thinks it's most needed.

“This is very frustrating,” he says about the need to focus on economic rather than moral arguments. “But this is the nature of today’s society. People in the developed countries have most of their basic needs already satisfied but instead of focusing on securing the future, they focus on today’s events.”

"People in the developed countries have most of their basic needs already satisfied but instead of focusing on securing the future, they focus on today’s events.”

Zhavoronkov believes the government is moving too slowly with the wrong priorities. Pharmaceutical companies have consolidated too much power and overlook too many emerging technologies to get us there. He suggests that the debt-ridden economy is headed towards sharp decline, that the media distracts people from the future, and that the public values celebrities over astronauts and qualified experts.

“Clearly the governments and the people they represent have their priorities misplaced and prefer focusing on the current events and not on the future,” says Zhavoronkov.

It’s impossible to talk about longevity — unlocking the biological secrets of aging and reversing them to keep people young, healthy, and beautiful — without talking about the warrantless hype that usually surrounds it. Take telomeres, protective layers around our genetic data that degrade over time. Dozens of articles for the lay press suggest that researchers are interested in learning how to protect telomeres based on the assumption that doing so could help us live longer. But a 2014 review of all the existing scientific evidence concluded that lengthening telomeres to prevent chromosomal decay would be entirely separate from keeping people healthy.

Misplaced hype and misguided decision-makers led Zhavoronkov to hedge his bets. “Previously, I have been more optimistic and careless with the predictions,” says Zhavoronkov, referring to his predictions for his own lifespan. “While the rate of progress is close to exponential, we are still too far from seeing tangible longevity interventions where you can see it to believe it.”

“I think that there is nothing more important than longevity research in this life," Zhavoronkov says.

As a teenager, Zhavoronkov worked towards living longer by practicing yoga, studying traditional medicine, and following a healthy diet. He wanted to become a doctor. But then he realized that all the diet and exercise in the world could only help so much and became disenchanted with medicine.

“Diet, traditional medicine, exercise, and yoga will not help overcome aging, only postpone some of the processes and delay the onset of age-related diseases,” Zhavoronkov told Futurism. “You don’t see many 120-year-old yogis and the 122.5 year record [for the longest lifespan] belongs to a woman who quit smoking in her 100s and never dieted. What is the purpose of hard work, exercise, and life in general if you cannot continuously improve yourself and the environment around you?”

Zhavoronkov argues that improved longevity likely won’t come within the next few years and may not hinge on gene therapies at all, as some advocates claim. He once compared the excitement surrounding longevity to the original internet boom: lots of promises for the short-term that never came to be, but lots of big-picture success and developments down the road (such claims can at least be useful for fundraising, he notes.)

“I think that there is nothing more important than longevity research in this life."

Rather, he thinks the key to discovering new drugs and treatments lies in collaborations between big data companies and pharmaceutical companies, combining molecular knowledge with powerful algorithms.

That's where Zhavoronkov's team comes in. They have developed artificially-intelligent algorithms that can conceptualize and design new molecules to use in longevity-boosting treatments. They've also built AI systems that can pore over huge sets of real-world data to come up with personalized recommendations and tools for people who want to maximize their time above the dirt, so to speak.

In addition to using artificial intelligence to find and develop new drugs, Zhavoronkov's team also recently published a paper that uses a machine learning algorithm to precisely track how our muscles change as we age, connecting the aging process to specific genes. Developing ways to measure aging helps Zhavoronkov and his team understand how our bodies change over time and, eventually, what we might be able to do about it.

Zhavoronkov has also started to scientifically test his ideas. “We are performing experimental validation with the most amazing laboratories around the world,” he says. “I hope that this technique will enable us to accelerate and improve the pharmaceutical industry — one of the most inefficient, bureaucratic and elitist industries on the planet.”

In an ideal world, transformative changes will ripple through healthcare within ten to fifteen years, Zhavoronkov predicts. But he's disappointed that his company and other teams working on real, science-based, longevity research haven't gotten more hype.

“I don’t think there will be such a thing as standalone longevity pharmaceuticals,” Zhavoronkov says. “There will be integrated diagnostic, therapeutic and clinical procedures. And to get there we need scale and we need the companies like Amazon and Alibaba that know a lot about us to enter the field.”

To develop individual treatments and medications meant to enhance a healthy lifespan, the algorithms Zhavoronkov and others are using will need to solve all of our outstanding medical endeavors. It's not enough for artificial intelligence to learn exactly how our muscles age —  actually halting the process in addition to protecting people against leading causes of death like heart disease and cancer is a whole separate problem. It's not yet clear which algorithm will find a way to keep our hearts beating, our neurons firing, and, yes, keep our telomeres nice and long.

There are still a lot of questions to answer (scientists even debate what the maximum human lifespan is and whether such a limitation even exists). And we'll need to sort them out before we see a longevity breakthrough. Predicting that this will happen “within the next few decades” isn’t helpful. It's just close enough to be exciting and justify grant funding, but far enough away for scientists to account for unforeseen obstacles and maybe even retire before time runs out. It's a tantalizing future that's permanently just slightly out of reach.

That’s not to say that this is all hogwash, that we shouldn’t continue to search for answers. Just because we can’t yet see the tangible steps that will get us to true human longevity — a development that will undeniably change the world for the better — doesn’t mean they aren’t out there.

Zhavoronkov, for his part, never thinks about the obstacles in his own way. “The limitations come from our current understanding of technology and will not be there in the future. We need to focus on what is available today at the very cutting edge and take it to the next level.”

2.01.22 Developments
NYPD Cop Investigated for $1.5 Million Scheme to Sell Fake Vaccine Cards
6.18.19
This NAD+ Supplement Takes the Fight Against Aging to the Cellular Level
6.10.19
The World’s Most Advanced Gut Microbiome Test is Changing Our Approach to Gut Health
5.29.19
Princeton Scientists: Mutations in "Junk" DNA Can Cause Autism
5.01.19
FDA: Ambien Is Making People Kill Themselves While Asleep