"I learned my bedside manner from East Village drag queens." 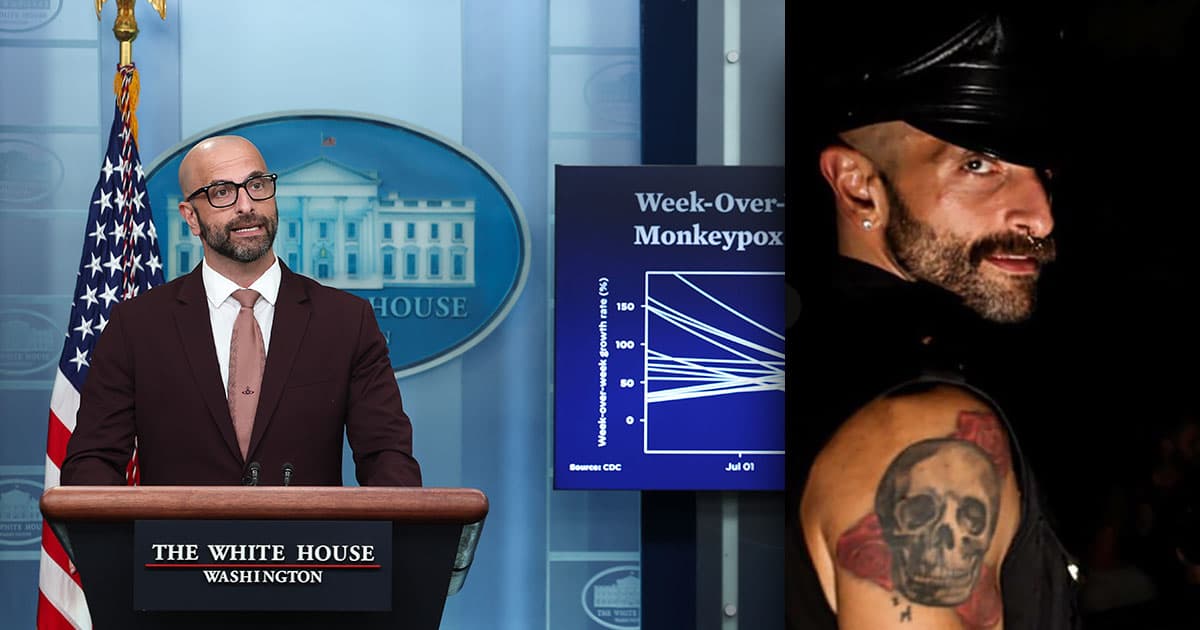 The doctor helping spearhead President Joe Biden's monkeypox response is an openly gay man who's posed for many a thirst trap in tasteful leather — and sorry, but that means he's an absolutely perfect choice for the job.

In early August, the White House appointed top FEMA official Robert Fenton as the National Monkeypox Response Coordinator. But it was his deputy appointee, Dr. Demetre Daskalakis, who's been stealing the headlines.

Daskalakis' previous roles as the director of the CDC Division of HIV Prevention and head of New York City's HIV and AIDS prevention efforts — during his tenure, the rate of new HIV infections dropped a reported 35 percent — as well as his extensive record as a published researcher make him robustly qualified for the job.

And just as important is his joyfully public-facing personal life as a gay man, replete with leather-clad photoshoots and a web series on the HIV awareness blog Plus. It's also an aspect of his identity that he's deftly merged with his public health work, giving out meningitis vaccines in gay clubs as early as 2013.

In other words, the appointment makes absolutely perfect sense. Monkeypox has mostly — though not exclusively — spread among gay men. Why shouldn't a top public health authority on the outbreak be a member of that community, so they can speak with authority to folks who are likely to be impacted by it, without seeming like a cultural outsider?

"I learned my bedside manner from East Village drag queens," Daskalakis joked in a 2014 interview with The Atlantic, and it's not hard to believe given that multiple profiles have pointed out that the Columbia and Harvard-trained doctor once administered meningitis vaccines in drag, though photos of the event have been lost to the sands of time.

In America, though, no good deed goes unpunished. So in the wake of Daskalakis' appointment, he's quickly become a target of conservative innuendo and hatred.

Ironically, these attacks — we're not even going to give them attention by linking them here — ended up being seized upon by Gay Twitter, who used it as an opportunity to praise the Greek-American doctor.

Corin Faife, a reporter at The Verge, opined that he wished the president "would just come out and say the monkeypox guy is qualified *because* he's a hot bear" and not "in spite of it."

Faife is right, by the way — so far, the White House hasn't said in as many words that a gay doctor who's been active in the party scenes where monkeypox is spreading is the perfect man for the job.

And given how clearly perfect he is for the gig, the Biden administration's silence is a crying shame.

More on monkeypox: Africa is on the Verge of Getting a Monkeypox Vaccine