"Am I, a child, supposed to birth and carry another child?" 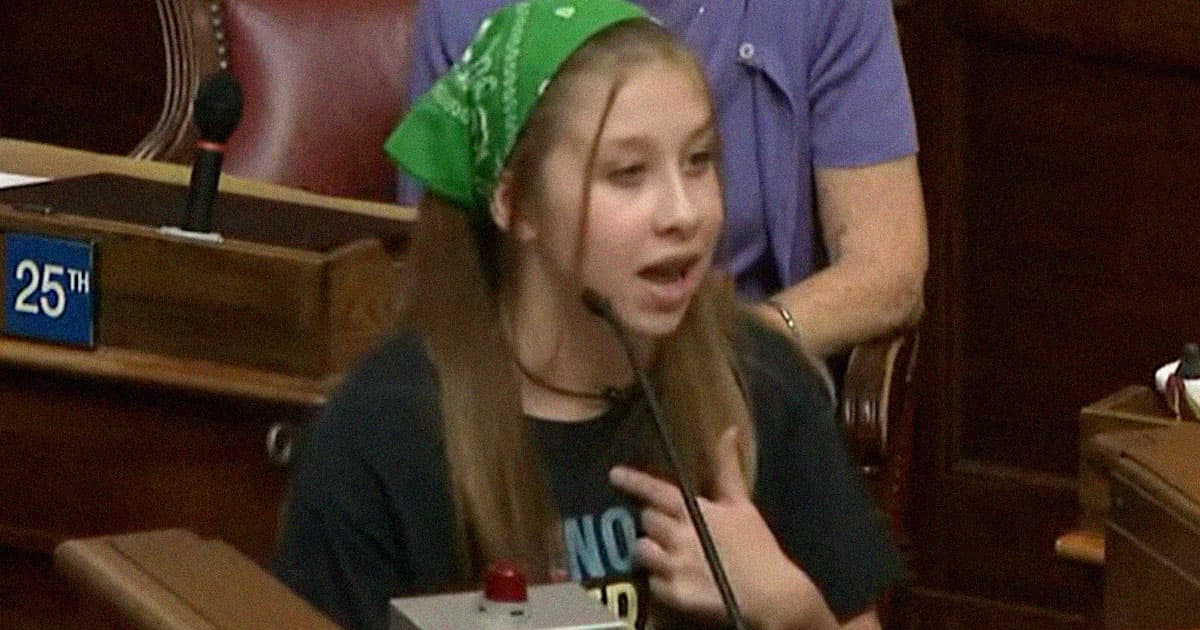 On Wednesday, hours before West Virginia House of Representatives passed a bill that will not only outlaw almost all abortions in the state, but will criminalize any physicians who perform the procedure, superhero 12-year-old Addison Gardner took the floor to beg lawmakers to think about how such a bill would potentially affect the lives of kids like herself.

"If a man decides that I’m an object and does unspeakable and tragic things to me, am I, a child, supposed to birth and carry another child?" she pleaded. "Am I to put my body through the physical trauma of pregnancy? Am I to suffer the mental implications, a child who had no say in what was being done with my body?”

West Virginia is just one of many states that have drafted or even passed abortion bans in the wake of the Supreme Court's unconscionable decision to overturn the abortion-legalizing precedent Roe v Wade.

And she is here spitting fiery truths she should never have to consider as the W Va state legislature considers banning abortion in all or most cases. pic.twitter.com/0wrSaWmMGH

Gardner was one of many West Virginians who took to the state house floor to protest the bill, each given 45 seconds to make their case. While there were some anti abortion advocates in the mix as well, those who spoke were overwhelmingly pro choice, many of whom gave heart-wrenching personal accounts of abuse and trauma.

This brave young girl's urgent testimony notably comes on the heels of a horrific abortion case in the Midwest, in which a 10-year-old rape victim was forced by post-Roe Ohio law to travel all the way to Indiana to receive an abortion.

Prominent anti abortion activists and politicians tried to paint the story as fake, and even after the horrifying ordeal was unequivocally proven to be true, the physician who performed the life-saving procedure has received death threats and may even face an investigation at the hands of Indiana's Attorney General.

While the West Virginia House did go on to pass the bill in a landslide 69-23 majority, lawmakers did include a last minute amendment that allowed for abortions in cases of rape and incest. But as The Washington Post reports, the narrow addition only allows for such procedures before 14 weeks of pregnancy, and only in cases that are reported to the police — a stipulation that presents a whole other set of obstacles.

The bill was passed to the state senate on Thursday, and could become West Virginia law as soon as end of day today. It's terrifying, and nobody could possibly put what this bill means for American girls, women, and other childbearing people into words better than this 12-year-old did on the West Virginia house floor.

"You say you're pro-life," she demanded. "What about my life?"

READ MORE: Girl, 12, challenges W.Va. lawmakers on abortion: 'What about my life?' [The Washington Post]