Nature At Its Most Devastating: The Science Of Earthquakes 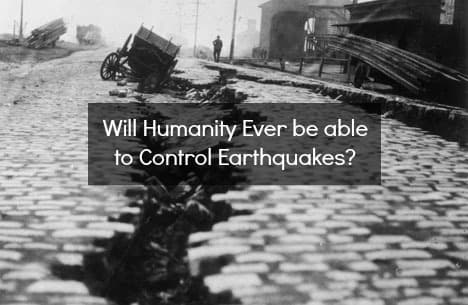 Earthquakes are often amazingly impressive events. If they are large enough, they can disrupt local habitats and even alter Earth's rotation. Just a few centuries ago, we could only explain volcanic and seismic activities as the acts of gods who were punishing their creations. For example, ancient Greeks believed that Poseidon was the "Earth-Shaker," a being who would topple their cities if they didn't worship and appease him. Unfortunately for them,  Greece sits in one the most earthquake prone areas of the world, situated in a boundary region between 3 tectonic plates (their God must have often appeared to be displeased). Similarly, the Romans believed the Italian island of Volcano was the vent above the forge of the god Vulcan.

Earthquakes most often occur when there is a large build-up of pressure within the crust of Earth that is released very suddenly. This release causes the ground to shake violently. Every year, we receive approximately 18 large (7+) seismic tremors. Some result in major structural damage to our cities, which often means high rates of injury and numerous causalities. However, these very powerful quakes aren't the whole story. In fact, they are an extremely negligible part of the story. In truth, the Earth is constantly active. The result of this is hundreds, or thousands, of small and distant earthquakes every single year, all across the globe (and of course, a vast majority of these events are of no concern to us).

Many seismic events occur in areas surrounding the Pacific Ring of Fire (much like volcanoes), but in general, they follow the lines where the Earth's various tectonic plates meet - that includes all of the different plate margins: constructive, collision, and conservative. However, you may also be interested to know that tectonic activity isn't the only thing that causes earthquakes. They can be caused by volcanic activity and even man-made activities.

Almost always, the precise region where the pressure release occurs is within the crust, and we call this position 'the focus.' The focus may take a range of depths, which are dependent on the type of boundary and the maturity of the fault. A shallow focus (usually the most destructive) is between 0-70km deep, but they can actually originate right into the upper mantle of Earth's crust, up to 700km deep! This is likely because a lot of earthquakes are a result of the subduction of oceanic crust. In such cases, as the slab is pushed downwards, it scrapes its way along the front edge of the continental plate - causing the earthquakes - and diving down deep into the upper mantle. The intense heat subsequently begins to melt the slab down into an acid magma. As the energy, embodied as shock waves through the rock, radiates outwards from the focal point, it immediately begins to lose energy, and this means that the position often most powerfully hit is the point directly above the focus - we call this 'the epicentre.'

Though earthquakes can be caused by events like the collapse of volcanic islands (similar to the legendary eruption of Krakatoa in 1883), the majority occur at faults in the crust. A fault (or fracture) is a discontinuity in the rock where it has been displaced by tectonic forces, and we find most destructive and conservative plate boundaries. Many often assume that the fault line is between the major plates (like at the San Andreas fault), but in truth, there is no single clean fracture. Rather, in the region surrounding the major boundary, you find a fault zone of complex deformation. There are 3 types of fault; strike-slip, normal, and reverse. The strike-slip fault is where two blocks are moving past each other in different directions or at different speeds. The other 2 are a vertical displacement of blocks over an angled fault line - the normal fault is usually found at divergent boundaries (and the reverse fault at convergent boundaries). It is often this nature of the fault that controls its power.

One of the first attempts at a scale on which to measure the intensity of an earthquake is the much criticized Mercalli scale. But the scale doesn't use a quantitative form of measurement to use to assign a 'level.' Instead, it takes the very subjective route of using the effects to measure its power. For example, level 2 is 'Weak', described as only being felt by a couple of sensitive people and causing suspended objects to swing slightly. For scientists, this was just not accurate enough. Soon after we developed the Richter scale. It measures the energy released during an earthquake on a logarithmic scale; so 7 is 10 times more powerful than 6 (with 30 times more energy). In many countries this has also been abandoned by scientists for the moment magnitude scale, which is based on many more factors associated with the fault and the local geology. But because of its similarity to the Richter scale and the public's preference for the Richter scale, the units are often converted to match it.

We've clarified that an earthquake's shaking is an energy wave moving through the rock, but this is not the end of the explanation, as there are in fact 4 major ways in which this travels! When a fault line slips the first types of waves to reach a nearby by town are the primary and secondary body waves. The primary wave is the fastest and so first to arrive, moving through both solid rock (5km/s) and liquid magma or water (1.5km/s). It moves in a longitudinal fashion, as a series of compressions and dilations of the rock, though this first wave is usually undetected by humans. The following secondary and surface waves are the more deadly. The secondary wave moves at about 60% the speed of the primary one,but it can only travel through rock. This is because it is a transverse wave (where the rock moves perpendicular to its direction) and fluids aren't able to support shear stresses. This means the movement of the rock is up and down, or side to side (the polarisation is dependent on the propagation direction).

However, it isn't the body waves that cause most of the destruction; the two major surface waves are responsible for the haphazard movement that crumbles the foundations of buildings and swings bridges. The deceivingly named "love wave" is fastest of the 2, and propagates at around 90-100% the speed of the S wave. They move through the upper layer of the crust as horizontal traverse waves so they cause the rock to move side to side very violently, as they also have the largest amplitude of all waves. However, the most devastating of all seismic waves is the Rayleigh wave - also called "ground roll." They move at a variation of speeds that depend on the medium, but they are generally slightly slower than the love wave. The deadly property of the Rayleigh wave is the way it travels through the rock, as it ripples with motions that are similar to water waves. This produces a 'rolling' effect on the particles of rock, moving them vertically as well as horizontally!

So that's the core science behind earthquakes; where they occur, why they happen, and how they work. Scientists' 'earthquake guide' still isn't complete,and we still have much to learn about this unusual and frightening phenomenon. In the next century, we will be working to complete our picture of earthquakes, and hopefully create the perfect formula for predicting them so that we can save thousands of lives. Maybe one day, we will also be able to control the immense power of earthquakes through building design or putting machinery into the fault lines to release strain? Physicist and science popularizer Michio Kaku predicts that we will reach a Type I civilisation on the Kardashev scale in 100 years, where we will be able to control all of the Earth's natural forces, including volcanoes, the weather and earthquakes. What's your opinion? Will we ever be able to accurately predict where and when earthquakes will happen? ... or even control them?