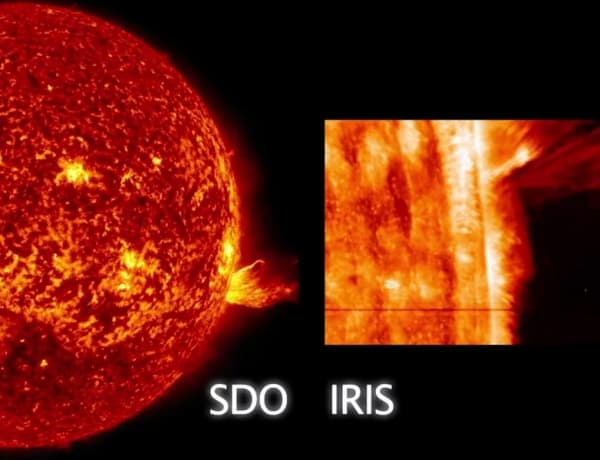 NASA’s Interface Region Imaging Spectrograph (IRIS) has taken its first images of a huge coronal mass ejection (CME). The spacecraft was launched with the hopes of studying the Sun in exquisite detail. The new technology, which was launched a year ago in June 2013, has the ability to gaze deeper into the atmosphere of the Sun, then ever before.

In images captured on May 9th 2014, scientists were able view a CME that blasted out of a Sun at 1.5 million miles per hour. NASA has compiled a video of the amazing footage. “The field of view [seen in this video] is about five Earths wide and about seven-and-a-half Earths tall” (NASA).

Though they are similar, coronal mass ejections occur in different atmospheric altitudes than solar flares. They are the result of magnetic fields being violently twisted within the Sun’s outermost atmosphere, the corona. During such ejections an immense amount of plasma, upwards of a billion tons, can be thrown out into the solar system.

It is interesting to note that it may take one to four days before the CME reaches us, and extremely energized particles being pushed by the shock front can reach Earth within an hour. As Earth’s magnetic field attempts to shield us from the harmful radiation, the opportunity to view aurorae arises.

The exact mechanisms of CMEs are not yet known, and since these surges are responsible for a great deal of our solar system’s weather, it is an important piece of information to pin down.

The Interface Region Imaging Spectrograph is a Small Explorer Mission launched by NASA to improve our knowledge of solar material. It has the ability to measure in high-resolution, the temperature, velocity, and energy of substances moving through the inner layers of the Sun’s atmosphere.

A number of NASA affiliates work with the Lockheed Martin Solar & Astrophysics Laboratory on IRIS technology. They are committed to continually pushing the boundary of what we know about the Sun and its ferocious outbursts.