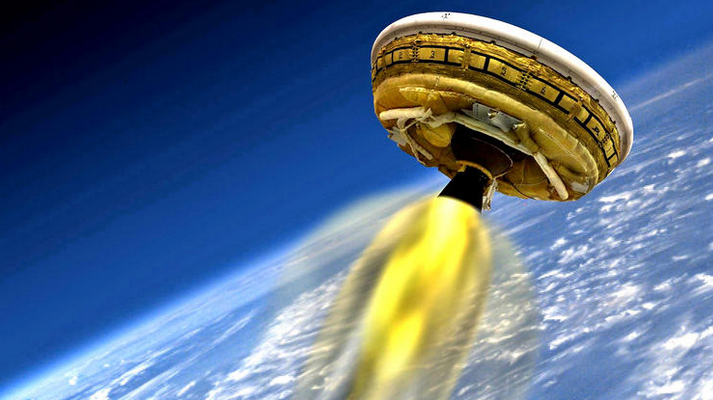 NASA's "Flying Saucer" was able to give us a great view of beautiful planet during its test flight over Hawaii last June. Now, a year later, the craft has another successful test flight under its shiny metal belt, leading us one small step closer to mankind on Mars.

After being delayed for about a week, NASA's Low-Density Supersonic Decelerator (LDSD), or "Flying Saucer," prepared for launch at the U.S. Navy Pacific Missile Range Facility in Kauai, Hawaii.

Attached to a large scientific balloon that measures 34.4 million cubic feet in volume and 980 feet tall once inflated, the LDSD ascended to approximately 180,000 feet (54,800 meters).

After deploying at 7:45 a.m. HST, the LDSD finally reached its full ascent. It separated from the balloon and was stabilized by four small rockets on its base. The rocket engine then sent the vehicle to the "edge of the stratosphere" at a speed of Mach 4.

Two separate technologies were tested during this flight. The first, that functioned as hoped, was the supersonic inflatable aerodynamic decelerator (SIAD). This is a "balloon-like pressure vessel" that inflates around the saucer to slow its descent.

The supersonic parachute was also tested, but didn't perform as expected; it actually tore apart. Testing these technologies at such altitude and speed simulate the supersonic speeds that the craft would encounter in the Mars atmosphere. The parachute is used in collaboration with the SIAD to further slow the craft.

Though the deployment of the parachute didn't go as expected, the test was still vital as it provided important information for NASA and was considered a success. As they study the "black box" of the craft, they'll be able to improve their designs further.

The whole process was even environmentally friendly. The Kauai firm Pacific Farm Services plans to recycle the balloon after retrieval.

The success of this test gives hope to the feasibility of using this technology "for landing future robotic and human missions on Mars." If the two devices work effectively, they will help with the efficient design of future space craft. Because large braking rockets will be replaced by the parachute and the SIAD, precious space will be saved on the vessel. According to NASA, those savings could double or triple the "amount of payload future craft can carry to the Martian surface." Examples of payload include habitat modules.

So far, the heaviest object NASA has put on Mars is the Curiosity Rover. They need to be able to land 30 times this weight safetly in order to consider a habitat on the red planet.

With this success, NASA is on track with their goal to send humans to Mars as early as 2030.