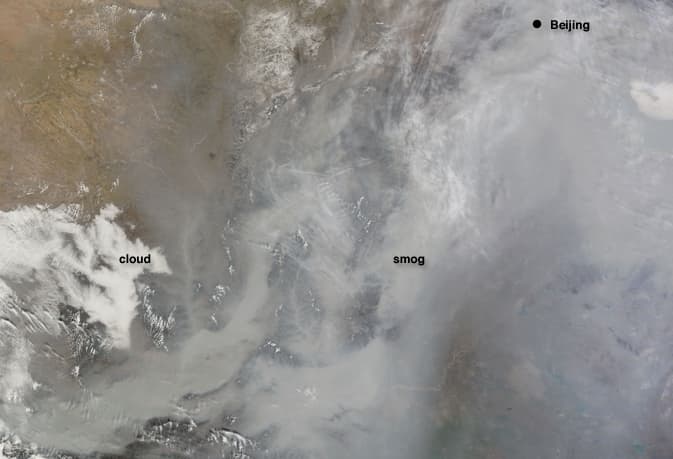 Of course, it's never just one factor. Thus, it’s not merely the West Coast of North America that bears the onus of the stronger extratropical cyclonic behavior; the researchers also blame the phenomena for the particularly cold winter that the Eastern United States experienced in 2013.

Previous investigations into the impact that Chinese air pollution has on our planet have revealed that a number of the pollutants actually reach the United States, including ozone and sulfates. The combined effect of all of this, this paper estimates, include one extra day of smog each year in the Los Angeles area.

Although one extra day of smog, and moderately reduced air quality, in the Western United States might seem a relatively minor annoyance (particularly compared to local pollution sources), it turns out that the real damage may be happening thousands of miles before the pollutants ever reach North American shores.

The trend over the past 30 years has been for clouds forming over the Pacific Ocean to become deeper, and storm systems coming in to hit the Pacific Northwest about 10 percent stronger. Scientists first began to suspect that the cause was driven by events in Asia because of the explosive expansion of Asian economies, particularly that of China, during the same period as this increase.

The pollution comes in the form of extra particulate matter rising up into the atmosphere. The larger numbers of particles provide a focal point for increased condensation in the storm fronts. That additional condensation releases additional heat energy into those systems, and the additional energy strengthens the storm, fueling the convective process of cloud formation.

Although the current round of experimentation with the data only reveals the impact that this has on North America, the researchers are also planning new experiments to determine whether or not the pollution is affecting the climate globally. According to this NASA article, preliminary results suggest that the answer is “yes."

This could have a far reaching impact on how we understand the biosphere, and how we confront and combat climate change. As the NASA release notes: "The work should raise even more red flags about aerosol-based geoengineering solutions — interventions in the Earth system intended to counteract global warming. Some groups have suggested that we could inject sulfate aerosols into the stratosphere to block incoming sunlight, but Jiang and Wang found that sulfates are the most effective type of aerosol for deepening extratropical cyclones. Ongoing injections would bring more stormy winter weather globally and would likely change the climate in other ways we cannot yet foresee."

Below is an image taken by FQTQ writer Jolene Creighton, who visited Beijing this past summer (July 2015). She snapped a few images as she was flying out of the city, and they clearly show the smog-choked land resting beneath the clearer sky above.