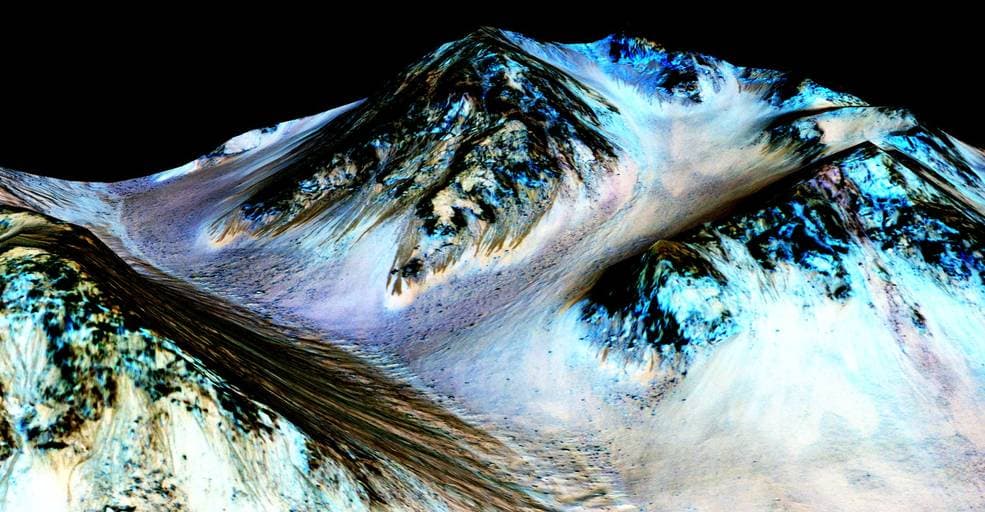 Mars has long been heralded as a dry, dead world. It is a planet of eternal dust. At least, it seemed so. Today, September 28th,  NASA announced that they have uncovered strong evidence suggesting that liquid water flows on the Red Planet.

This find is notable as, on Earth, everywhere that we find liquid water, we find life.

We've long known that Mars has water; however, this water is primarily found in the frozen ice caps located at the poles.  As such, it's unlikely that any life could thrive there. In this respect, this latest discovery gives new hope to the search for alien life...and a great boost to exobiologists who think there may be life on the Red Planet.

“Our quest on Mars has been to ‘follow the water,’ in our search for life in the universe, and now we have convincing science that validates what we’ve long suspected,” said John Grunsfeld, astronaut and associate administrator of NASA’s Science Mission Directorate, in a press release. “This is a significant development, as it appears to confirm that water -- albeit briny -- is flowing today on the surface of Mars.”

So no matter what way you slice it, in the end, this greatly adds to the likeliness of life existing on other worlds.

Ultimately, this discovery was made as a result of strange, dark streaks that were detected by NASA's Mars Reconnaissance Orbiter (MRO). Scientists used an imaging spectrometer on MRO and detected the telltale signs of hydrated minerals (called perchlorates) on these slopes. Notably, these dark streaks appear to ebb and flow over time—appearing to flow during the warm seasons and then slowly fading in the cooler seasons.

Ultimately, these streaks are believed to be evidence of liquid water.

NASA explains this process by noting that some perchlorates have been shown to keep liquids from freezing even when conditions are as cold as minus 94 degrees Fahrenheit (minus 70 Celsius), which is important, as Mars tends to be a rather cold world. Indeed, at its coldest, temperatures reach -207° F (-133° C).

Watch: Animation of Flows on Mars

Scientists note that the hydrated salts would lower the freezing point of a liquid brine, and that these streaks most likely stem from a shallow subsurface flow, with enough water wicking to the surface to explain the darkening.

"We found the hydrated salts only when the seasonal features were widest, which suggests that either the dark streaks themselves or a process that forms them is the source of the hydration. In either case, the detection of hydrated salts on these slopes means that water plays a vital role in the formation of these streaks," said Lujendra Ojha of Georgia Tech, lead author of a report on these findings published Sept. 28 by Nature Geoscience.

More news will be forthcoming.