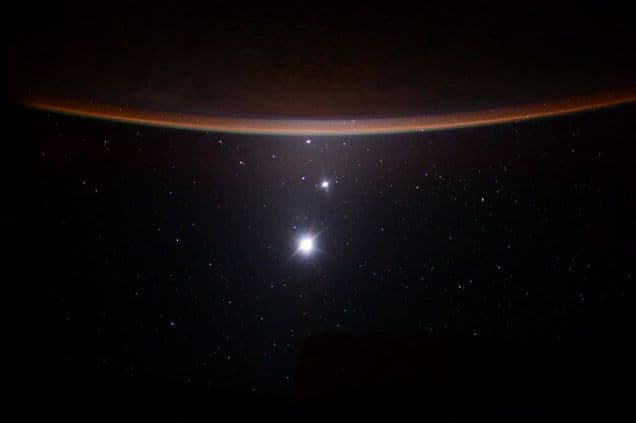 Earlier this week, NASA astronaut Scott Kelly took this stunning photograph from the International Space Station (ISS). In the image, we see the Moon, Venus, Jupiter, and Earth coming into near alignment. Kelly is no stranger to stunning space imagery. On his Twitter account, he frequently posts images of what he sees as he orbits some 250 miles (400 km) above our planet.

But he does a lot more than post pretty pictures.

Kelly is celebrating his first year on the ISS. So on August 1st, he held a Twitter Q&A in order to answer our questions about what it is like living in space. The hashtag used was #YearInSpace, and he fielded questions on a variety of topics, including his favorite sports team, how astronauts ensure that they get enough exercise in space, and a host of questions on how life on the ISS differs from life on Earth.

He even answered questions from the president of the United states.

Hey @StationCDRKelly, loving the photos. Do you ever look out the window and just freak out?

I don't freak out about anything, Mr. President. Except getting a Twitter question from you. https://t.co/AT0nvUXkq4 — Scott Kelly (@StationCDRKelly) August 1, 2015

Ultimately, Kelly is spending so much time in space because, if we are ever to leave this planet and visit other worlds, a firm understanding of the impact that space travel has on the human body in necessary. To this end, Kelly is staying on the ISS far, far longer than what is typical.

As NASA notes, "Most expeditions to the space station last four to six months. By doubling the length of this mission, researchers hope to better understand how the human body reacts and adapts to long-duration spaceflight. This knowledge is critical as NASA looks toward human journeys deeper into the solar system, including to and from Mars, which could last 500 days or longer. It also carries potential benefits for humans here on Earth, from helping patients recover from long periods of bed rest to improving monitoring for people whose bodies are unable to fight infections."