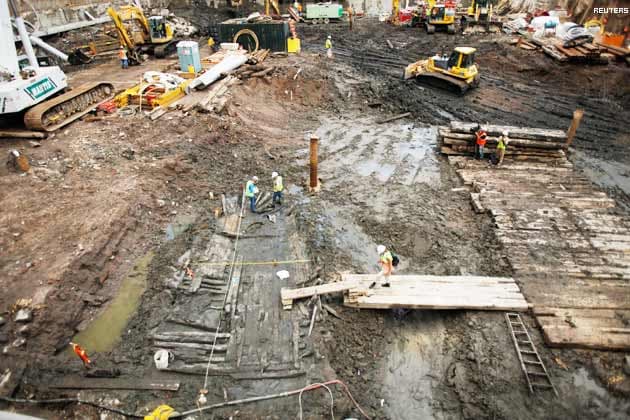 The World Trade Center (WTC) attack, which took place on September 11th, 2001, left the world in shock; however, in the midst of this tragedy and chaos, cleanup crews discovered something amazing. In 2010, buried underneath the ruins of the Twin Towers, we found the remains of a large ship's hull. Now, scientists have revealed the secrets behind this mysterious vessel.

The ship was discovered in the wreckage below the excavation site, approximately 22 feet (6.7 meters) below the soil. By gathering samples and testing the wood from the hull of the ship, scientists were able to determine that the hull came from the same era as the Declaration of Independence, in the late 1700s. Scientists at Columbia's Tree Ring Lab, who were led by Dr Martin-Benito, made this determination after comparing the wood's ring patterns, which were found on the timber of the hull, with those found in the historical record. The researchers used dendro-chronological dating and provenancing to uncover the date of the ships' production. More specifically, it seems that the ship was built in a Philadelphia shipyard in around 1773.

It also seems that the oak timbers that were used to build the ship all originated from the same general region in Philadelphia. Since the timber all comes from the same vicinity, it is likely that the ship was produced by a small shipyard. Most notably, the researchers found that the rings on the hull match other samples that were taken from Independence Hall, which is the building where the founding fathers signed both the Declaration of Independence and the United States Constitution. In the abstract, the authors of the findings report:

This finding is notable, as very few ships have been discovered from the latter decades of the 18th Century, and there is very little historical documentation related to how the ships that were produced during this ear were constructed. Consequently, this ship offers us important insights into the history of American shipbuilding.

So, how did the ship get beneath the WTC? It's actually not as strange as you might think. When Manhattan (where the WTC was located) was first settled, the site lay within the Hudson river. To clarify, in the 18th century, the current location of the WTC would have been under water—beneath the Hudson. Maps and other archival documents clearly detail this data. Obviously, as the settlement became more populated, commercial waterfront space became increasingly desirable and (consequentially) more and more scarce. As a result, from the mid 1700s until the mid 1800s, the area along the river was increasingly filled in to advance the Manhattan coastline farther into the Hudson.

Historians still aren't certain whether of not the ship sank accidentally, because of some unintentional mishap, or if it was purposely submerged. Oftentimes, city planners would use garbage and other debris (like an old ship) to build the foundations of new ground in Manhattan. Essentially, we would make landfills along the Hudson in order to create a buildup that would, ultimately, increase Manhattan's coastline.

Oysters were also found fixed to the ship's hull, which suggests that the ship languished in the waters of the Hudson for quite some time before being buried by layers of trash and dirt that (eventually) formed the land upon which the Twin Towers rested. It is a little ironic that the World Trade Center attack—the historic moment that reshaped much of America's future—also opened up a door into America's past.