It looks like it's wearing the eyes of its last victim. 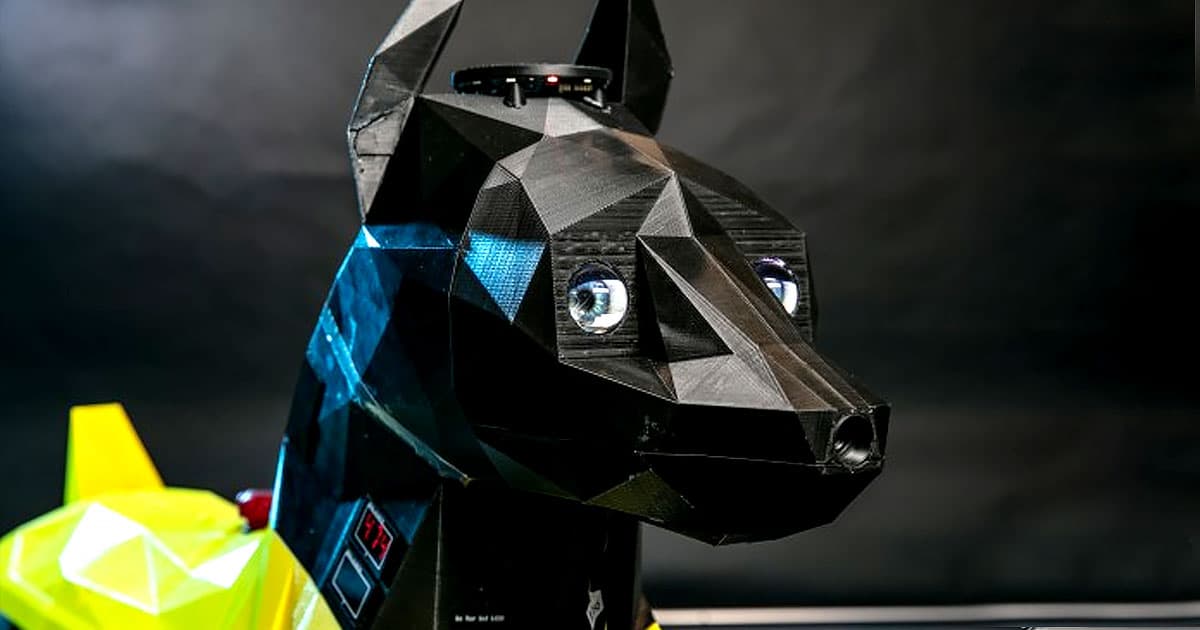 "Astro" the robodog promises many things, but its face is the stuff of nightmares.

Researchers from Florida Atlantic University (FAU) set out to build a robodog that combined all the best parts of Siri, 3D-printing, and nimble, next-gen robots like Boston Dynamics' SpotMini. Unfortunately, Astro's engineers added an extra component to the bot: horrible, human-like eyes.

Housed inside Astro's 3D-printed, Doberman pinscher-like head is a computer system that uses deep learning to "learn from experience to perform human-like tasks, or in his case, 'doggie-like' tasks, that benefit humanity."

Astro and a handful of other robots like it are still "pupp[ies]-in-training" but currently respond to commands like "sit," "stand," and "lie down." Researchers say eventually Astro will learn to do things like respond to hand signals, detect colors, and coordinate with drones. All of which, while impressive, do nothing to make Astro seem any less unsettling.

In an unlisted video on FAU's YouTube channel, Astro can be seen obeying commands, blankly staring, and tottering around like some sort of cyberpunk, Scrappy-Doo nightmare.

Astro's creators have high ambitions for the bot, including "detecting guns, explosives, and gun residue to assist police, the military, and security personnel." They say it could also serve as a service dog for the visually impaired, in medical diagnostic monitoring, and as a first responder for search and rescue missions.

In short, the only thing Astro isn't being built to do is not look creepy as hell.

Robots with human features, like Astro, that aren't quite human enough fall squarely in the "uncanny valley." Not quite real enough to deceive, but not quite bot enough either — features that make us humans uncomfortable.

But researchers may aim to make Astro even more human. In a press release Ata Sarajedini, Ph.D., Dean of FAU's Charles E. Schmidt College of Science explained that, "Astro is inspired by the human brain and he has come to life through machine learning and artificial intelligence, which is proving to be an invaluable resource in helping to solve some of the world's most complex problems."

Read This Next
Wait What
FCC Commissioner Says He's Afraid of Robodogs and We Can't Tell If He's Joking
Bot Crime
Experts Shocked by Military Robodog With Sniper Rifle Attachment
More on Robots & Machines
FROM THE DEPT. OF...
Thursday on futurism
Best Charging Stations in 2022
FROM THE DEPT. OF...
Wednesday on futurism
Best Vintage Turntables in 2022
FROM THE DEPT. OF...
Wednesday on futurism
Best Gaming Chairs Under $100
READ MORE STORIES ABOUT / Robots & Machines
Keep up.
Subscribe to our daily newsletter to keep in touch with the subjects shaping our future.
+Social+Newsletter
TopicsAbout UsContact Us
Copyright ©, Camden Media Inc All Rights Reserved. See our User Agreement, Privacy Policy and Data Use Policy. The material on this site may not be reproduced, distributed, transmitted, cached or otherwise used, except with prior written permission of Futurism. Fonts by Typekit and Monotype.