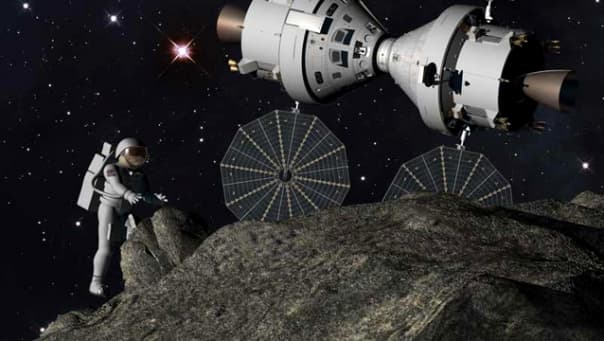 In an effort to push the boundaries of human space travel, our understanding of the solar system, and per a directive from American President Barack Obama, NASA has been looking into different ways to land a human on an asteroid. Specifically, on a near-Earth asteroid (NEA).

One of the most ambitious parts of this project would be retrieving an asteroid and putting it into high lunar orbit by 2025. This would give us relatively easy access to the asteroid, as well as giving us a close place beyond the orbit of the moon to send humans. This type of capturing maneuver could give us very valuable technological advances and experience that would directly benefit the long-term survival of our species. Since one of humanity’s greatest threats comes from NEAs, having the ability to move an asteroid in a very precise fashion would certainly come in handy.

In addition, being able to develop techniques to extract water and other valuable goods from an asteroid will be invaluable for future missions to just about any body in the solar system. It also opens the door for colonization techniques for asteroids, aiding in our eventual expansion into the solar system. In addition, it’s possible (and very likely) that humanity will start mining asteroids for materials, again, having a proving ground so close to home is beneficial.

Of course, one of the major benefits of having an asteroid right next door would be the ability to study its composition. It would give us an unprecedented amount of knowledge to work with when it comes time to deal with the next asteroid that decides to play a galactic game of marbles with our planet. Even though we have the technological capabilities to deflect an asteroid today, creating the programming code and the equipment to do so on the fly—with global catastrophe looking us in the face—sounds like a bad idea.

Finally, such a mission is politically invigorating in a way comparable to the early space program—specifically, the Apollo missions. Nowadays, space has fallen out of the public’s eye; even worse, many see it as a waste of time, effort, and resources. We’ve been launching satellites for half a century; we’ve been sending people to space for the same amount of time; and the International Space Station has been manned continuously for more than a decade. Even missions like Curiosity fall on deaf ears because we have already sent rovers to Mars and, thanks to Spirit and Opportunity, we have some pretty pictures of the Martian surface. Our recent efforts in space don't seem new or exciting (to the average person, that is).

Pulling an asteroid into high lunar orbit and landing people on it—that is some exciting stuff. It would give rise to an outpouring of new technologies that will be adapted for public use (giving average people benefits from space exploration) and inspire the next generation of scientists, engineers, and astronauts.

Plus, if all else fails, having an asteroid that close to Earth would give the 2012ers something new to "conspiracize" about (and, yes, I did just make up that word).